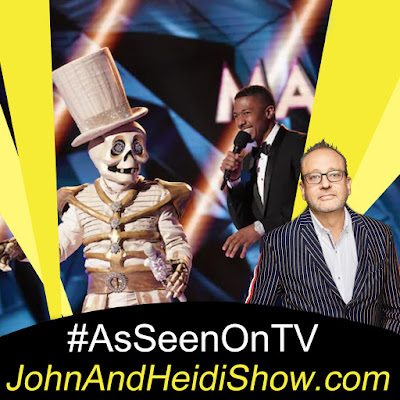 National Girl Me Too Day


According to a new study, people who prefer fruity alcoholic drinks are more fun. Researchers find fruity drink fans are most likely to describe their personalities as “fun” rather than “serious” and “carefree” rather than “driven.” (https://bit.ly/3smTENe)

It turns out Popeye the Sailor Man was right -- spinach really does make you stronger. A new study finds just one serving of leafy greens a day boosts muscle function, especially in the legs. Researchers say the cartoon icon’s favorite food can even protect older people from frailty. (https://bit.ly/3lRG5CM)

America’s favorite Florida Man was arrested this week for pulling a no-show at a court hearing. Matthew Kyle Leatham was collared on a misdemeanor failure to appear charge in connection with a criminal traffic case filed earlier this year after the 22-year-old was found driving without a license. When Leatham did not appear for his initial court hearing, a judge last month issued an arrest warrant. Leatham turned himself in last week at the Pasco County jail, from which he was released after about two hours in custody. Leatham, who works as a cook, first appeared in the news last month following his arrest for misuse of the 9-1-1 system and marijuana possession. As seen again in his latest booking photo, Leatham wears his allegiance to the Sunshine State on his forehead. In case you haven’t seen this guy yet, he actually has the state of Florida tattooed on his forehead. (https://bit.ly/3vMvQoc)

An episode of SpongeBob SquarePants has been pulled from Nickelodeon for making a mockery of the Coronavirus. (https://fxn.ws/3rIe7en)

Britney Spears says she cried for two weeks after the release of the “Framing Britney Spears” documentary.(https://cnn.it/3uaRfWp)

Paul Simon has sold his song catalogue to Sony. (https://nbcnews.to/2PoFJb2)

A man sitting in an expensive car is more attractive to women than the same man sitting in an economy car. Researchers (University of Wales) showed 120 women between the ages of 21-40 a picture of a guy behind the wheel of a luxury car, and then inside of a battered Ford Fiesta. Most of the women rated the guy’s personal attractiveness higher when he was seated inside the pricier car. When the experiment was reversed, men showed absolutely no preference for a woman in a fancy car.

Chewing gum boosts concentration. Next time you are having trouble focusing, you might want to reach for a stick of gum. A 2013 study in the British Journal of Psychology found that those subjects who chewed gum while taking part in a memory challenge were able to stay focused for longer periods of time than those who did not chew gum.

A NEWS HEADLINE... FROM SOMEWHERE IN THIS WORLD!
Brought to you by RadioTravelGroup.com

A Central Florida man with a criminal history of impersonating law enforcement was arrested during a traffic stop this week when deputies say he was dressed as a police officer while riding on a motorcycle and carrying a weapon. Orange County sheriff’s deputies said they spotted Jeremy Dewitte around 9:45 p.m. while traveling eastbound on Interstate 4. Dewitte was riding among other motorcyclists who “mirrored law enforcement.” A deputy noted the group of riders were dressed in yellow polo shirts with screen print and markings of police-type shields and badges. Their sleeves had “protection officer,” “motor unit” and “metro state protection services,” among other similar law enforcement-related titles printed on their shirts. Deputies said Dewitte specifically had two sets of two black stars on his collar that signify a two-star general within the U.S. military and a chief deputy in law enforcement. Dewitte’s getup also closely resembled a law enforcement motor unit, a deputy wrote in the arrest affidavit, as the 41-year-old also sported a bulletproof vest, a gun belt with a handgun or pepper ball gun, Motorola radios, pepper spray, a baton, and a body camera. (https://bit.ly/2OYASxn)

Reports said a man fired a dozen shots at a shed because a car he was taking to get cigarettes had a flat tire. 23-year-old Isaiah Patterson was charged with discharging firearms within city limits, a first-degree misdemeanor. Reports said police were called about 7:40 a.m. for a report of shots fired and when they arrived, they saw a woman standing next to a car with a flat tire. When officers asked the woman what was going on, reports said the woman told police she and her boyfriend, Patterson, had run out of cigarettes and decided to go to the store to get some. The car they took had a flat tire, so the man parked it by a driveway and the woman decided to walk to the store. As she walked, she heard gunshots behind her. Reports said police found a dozen shell casings in the driveway and a shed nearby had a dozen bullet holes. Patterson later confessed to police that he was upset so he fired several shots at the shed.(https://bit.ly/3sFGPOe)