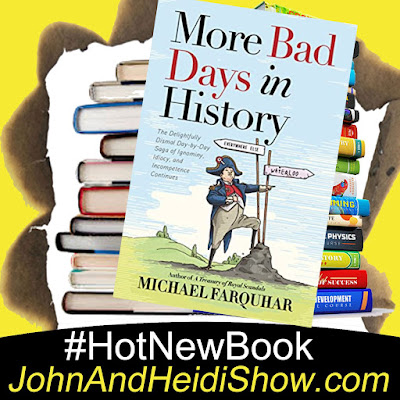 Our guest is a best selling author, Michael Farquhar. We will discuss his newest book, More Bad Days In History. AVAILABLE NOW - https://amzn.to/35nj0Av

A study in the UK identified two cases of Monkeypox that were found in humans living in North Wales. They believe humans contacted the virus through sexual encounters. (https://bbc.in/3znuvFU)

A study by the University of Notre Dame found that husbands who don’t help out with household chores are likely to have a higher income. https://bit.ly/3wr8KDy

A 21-year-old Florida Woman who was naked from the waist down inside a Circle K told a cop that “another deputy told her it was fine to do that.” Responding to a 1:30 a.m. “naked woman in public” call last Thursday, police found Kendall Mabry sans pants or underwear inside the convenience store in Umatilla, a city about 45 miles from Orlando. A Circle K clerk and a sheriff’s deputy both reported seeing Mabry emerge from the store’s bathroom “with no pants or underwear on.” When asked about her state of undress, Mabry reportedly “stated that another deputy told her it was fine to do that.” Mabry, police reported, smelled of alcohol and her speech was slurred. Additionally, “the smell of marijuana was coming out of her vehicle.” Mabry’s pants were found inside her car. Mabry, who lives five miles from the Circle K, was arrested for disorderly intoxication and booked into the county jail, from which she was released after posting $500 bond. Mabry, who has pleaded not guilty to the misdemeanor count, was not charged for going pantsless inside the store.(https://bit.ly/3gtLrSv)

A sequel to the classic Farrelly Brothers bowling comedy “Kingpin” is reportedly in the works. (https://bit.ly/3pENdo4)

In the new trailer for the upcoming film “Midnight in Sawgrass,” actress Megan Fox punches her real-life boyfriend Machine Gun Kelly, who also stars in the movie. (https://bit.ly/3pFRI1M)

Megan Fox was seen in Los Angeles wearing a boob-bearing sport coat with rhinestones over her you-know-what’s. (https://pge.sx/3vkSfHx)

A video has gone viral of a group of cows that went on a stampeded in Santa Cruz, Bolivia, injuring four people and causing minor property damage. (https://bit.ly/3zmZfXz)

A video has gone viral of a parachutist accidentally landing in the middle of a soccer game in Poland. (https://bit.ly/3xdsWZe)

A video of Selena Gomez attempting a 3-point shot and missing terribly has gone viral. (https://eonli.ne/2RH3zA1)

Facebook CEO Mark Zuckerberg has posted a video of himself throwing spears and shooting arrows. (https://bit.ly/3v5HfxK)

The Australian government banned the word "mate" for a day. There are probably slang or informal words that get on your nerves from time to time, particularly when you think something should be taken seriously. In 2005, Australian Parliament took a few citizen complaints a little too seriously and banned anyone on their staff from using the word "mate" while at work. Fortunately, Prime Minister John Howard objected, claiming that "mate" was an important part of Australian culture, and the ban was overturned within 24 hours.

North Korea watchers are eager to get the skinny on leader Kim Jong Un’s apparent weight loss — which some speculate might be a sign of deteriorating health.(https://fxn.ws/358ATTQ)

A kayaker hoping to paddle solo from California to Hawaii was rescued six days after he set out by a U.S. Coast Guard helicopter amid rough seas and high winds. Cyril Derreumaux endured several problems with his 23-foot kayak, but when he lost his sea anchor he said he knew he had to cut his adventure short. After consulting with his land crew, Derreumaux phoned the Coast Guard for a rescue Saturday night about 70 miles west of Santa Cruz. A diver was lowered from a helicopter into the water and helped hoist Derreumaux up. In addition to losing the anchor, the kayak's anchor lines had become entangled in the rudder, the GPS wasn’t functioning properly, and Derreumaux was seasick while pummeled with 12-foot waves. Derreumaux’s boat remains adrift in the ocean. He said he hopes to coordinate a retrieval effort this week when the winds die down. “Morale is good, I still have my passion for this adventure intact, and I am still determined to make it happen,” Derreumaux wrote. “I won't give up!!!” (https://bit.ly/3x7EsFw)

A California nun will plead guilty to swindling over $800,000 from the Catholic elementary school she ran to help pay for her gambling trips. 79-year-old Sister Mary Margaret Kreuper was charged Tuesday with wire fraud and money laundering for ripping off St. James Catholic School for a period of 10 years ending in September 2018. Kreuper, who was the principal of the school for 28 years, agreed to plead guilty as part of a deal with prosecutors. Kreuper used her position to funnel $835,339 of the school’s funds “to pay for expenses that the order would not have approved, much less paid for, including large gambling expenses incurred at casinos and certain credit card charges.” The nun was in charge of overseeing tuition money, fees the school received and charitable donations. She also controlled the school’s credit union accounts, which she used to divert other funds into that she would then use for the spending. Prosecutor said she also admitted to falsifying the school’s financial records. She is due to be arraigned on July 1st. (https://bit.ly/3izXgJP)