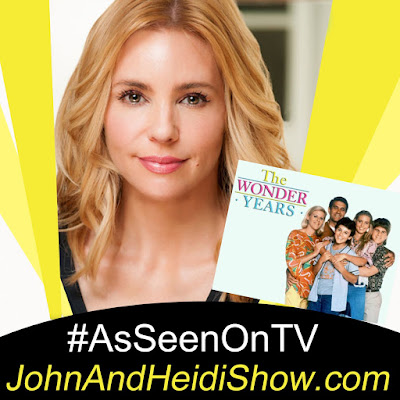 Today we visit with Olivia d'Abo (Wonder Years, Star Trek, Star Wars & much More) We'll talk about her NEW movie “Angie: Lost Girls”
After escaping from a sex trafficking ring, one teenage girl struggles to reconnect with herself and her family. To rescue her helpless friends, she must confront her own fears and help lead the police to her traffickers - at all costs.
AVAILABLE NOW - https://amzn.to/34zc82T

A new study finds that more than one hour of video games or recreational internet use on school days leads to poor grades. (https://bit.ly/3fjHnFg)

Uber has released its 2021 lost and found study with details about people who left something in their cars. (https://ubr.to/34hMOOA)

A South Carolina man doused his girlfriend with a bucket of urine during an argument at the couple’s apartment. When Myrtle Beach police responded to a 3:15 AM disturbance call, they spoke with the 27-year-old victim, who had urine- soaked clothing. The woman said her boyfriend, Fred Funnye, 61, got drunk earlier in the evening, returned to their residence and started an argument with her “about favors that needed to be done.” After Funnye called her a “bunch of profanities,” the woman said, he “grabbed a bucket he uses [to] relieve himself with and threw it at her.” The report does not address why Funnye opts to urinate in a bucket. An officer on scene reported spotting “liquid on the floor” and smelling urine. Upon being woken by a cop, Funnye, who smelled of alcohol, denied throwing anything at the victim. Funnye was arrested on a misdemeanor domestic violence charge. The couple had been dating for four years and began living together about five months ago. An online wedding planner indicates that the pair is engaged, with Funnye having proposed at Walmart.(https://bit.ly/3u0dqy5)

Seth Rogen is attacking other comedians for whining about “cancel culture” rather than owning up to their “horrific” or “terrible” jokes. (https://pge.sx/3fmWHkt)

On the heels of her announcement that she would be ending her daytime talk show after almost twenty years, Ellen DeGeneres bought back her Montecito, California ranch for $14.3 million. (https://bit.ly/3hSAqwG)

The U.S. Centers for Disease Control (CDC) and Prevention just issued new guidance to the cruise ship industry, including the need for COVID-19 vaccinations, a necessary step before passenger voyages can resume. A cruise booking agency rounded up a list of the wackiest cruise complaints from cruise passengers.

• One passenger complained the ocean was “too loud.”

• A couple said the service was so excellent on a cruise that they spent a lot more on tips than they expected, and wanted their gratuities to be refunded.

• A first-time cruise passenger blamed the captain for not warning him that he could get seasick.

It was canceled last year, but there will be a national spelling bee in July.

Rolls-Royce makes the most expensive car in the world. Currently, the most expensive car in the world is a Rolls-Royce Sweptail that sold for $13 million. However, even if you have that kind of dough lying around, you won't be able to buy it—only one was made, and it was custom-built from the ground up according to the buyer's specifications. But brand-new custom cars have nothing on used classics; the recent sale of a 1963 Ferrari GTO for $70 million is supposedly the highest price ever paid for a car.

A restaurant group is opening a no-alcohol Irish Bar in Abu Dhabi. (https://bit.ly/340m1pN)

A Florida Woman battered her boyfriend with “soiled dog pads” during a late-night confrontation that also included the victim getting sprayed in the face with Windex. Investigators say that 60-year-old Ann Walsh attacked her 64-year-old beau inside the couple’s Clearwater apartment last Thursday evening. Walsh was arrested for domestic battery and booked into the county jail, where she remains locked up in lieu of $5,000 bond. As detailed in an arrest affidavit, Walsh engaged in a “physical altercation” with the victim while he sat on their couch. The retiree, cops allege, “took soiled dog pads and threw them at the victim.” During a post-arrest interview, Walsh reportedly copped to also spraying her boyfriend in the face with Windex. A judge has ordered Walsh to have no contact with the victim, who apparently was not injured during the dog pad incident. Walsh’s rap sheet includes several prior domestic battery arrests, all of which involve the man identified as the victim in the alleged May 20 attack. (https://bit.ly/3bVudMi)

Half the graduating class at a Texas high school was suspended and had their senior privileges revoked over a prank that involved sticking plastic forks into the school field. About 40 students were involved altogether – but some went into Comfort High School at night and spread balloons and plastic wrap inside. “It was a harmless senior prank that all of us parents knew 100% what was going on,” parent Hope Jay told News 4. Pictures posted by reporter Morgan Burrell on Twitter included a photo of a mounted deer head rearranged to be crooked and other mischief. The valedictorian and salutatorian were among the high performers in the class who were in on the shenanigans and are now suspended. Parents are complaining that the field forkers and those who went in the school are facing the same discipline. School administrators didn’t comment to the station. The situation has prompted the social media hashtag #freetheforkingseniors. (https://bit.ly/2SvkaGW)