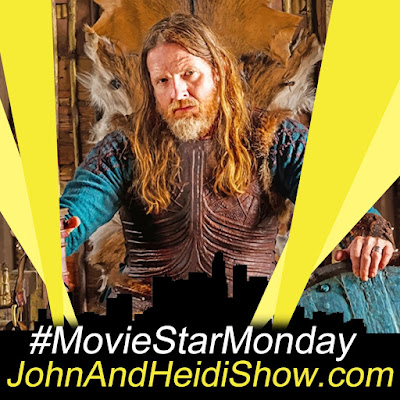 This #MovieStarMonday we visit with Donal Logue about his films, TV shows and about his NEW BOOK written with Danny Trejo.... the book is called Trejo: My Life of Crime, Redemption, and Hollywood- https://amzn.to/3AB1l6a

A study finds consumers devote more time researching a car or refrigerator purchase than they do a doctor or health plan. The study found while consumers are willing to research costs, they invest less effort in it than for their other purchases.

A study found 20 of 100 dishrags carried germs that cause food poisoning, skin ailments, and more.

A new study claims people can see health improvements by just exercising vigorously for four seconds at a time. (https://bit.ly/3lRAQoX)

A New York native boarding a Delta flight at Southwest Florida International Airport found himself in a pair of handcuffs after he refused to stop vaping on the plane. The Lee County Port Authority Police Department said they were notified to respond to Gate C at RSW around 9:05 p.m. on Sunday because Nicholas Saccone was vaping on the airplane and wouldn’t stop upon request from flight crews. The report said Saccone was drunk and began using racist and homophobic slurs toward flight attendants after being asked to stop. Saccone began spewing slurs at police once they arrived to remove him from the airport completely. Once officers were able to get Saccone out of the terminal, he called 911 because he wanted to speak with the officers’ supervisors. That call earned him a pair of handcuffs for misusing 911. In a statement and videos released by The Federal Aviation Administration, they call for “zero tolerance” for unruly passengers. In a public service announcement from the FAA, FAA administrator Steve Dickson said boozing up before boarding could be contributing to the rising numbers of altercations on flights. “Disruptive passengers pose a safety risk to crews and other passengers,” said Dickson in the video. “We’ve seen incidents related to alcohol, violence toward flight attendants, and abuse behavior in general.” The FAA is calling on airports to limit the amount of alcohol bars and restaurants inside the airport are serving people before their flights in hopes of cutting down on in-flight altercations. Saccone was arrested on multiple charges including Disorderly Intoxication in a Public Place.
https://nbc-2.com/news/crime/

Actress Kristen Bell recently stated that she and her husband Dax Shepard only bathe their two daughters when they smell bad. Bell claimed she and Shepard also want to do their part in protecting the environment by only using water when absolutely necessary. (https://pge.sx/2U4xcfM)

Forbes Magazine is reporting that Rihanna is now officially a billionaire, with a networth of $1.7 billion dollars making her the wealthiest female musician in the world and second only to Oprah Winfrey in the entertainment field. (https://bit.ly/3AbgVFi)

Three of America’s most popular airlines — American, Delta, and Southwest — will not institute a COVID-19 vaccine mandate for their employees. (https://bit.ly/3izGUQK)

A graduate student has proven that Twitter algorithms are biased towards younger and slimmer faces. (https://bit.ly/3CzRP5b)

The latest census data is expected to reveal that the number of white people in the United States has declined for the first time in history. According to Brookings Institution demographer William Frey, the lower number of millennials having children could have accelerated the decline. (https://bit.ly/2VKk7ct)

A Chicago man bit off another man’s nipple in a road rage incident. (https://bit.ly/3lTnLeB)

Alaska is the only state that can be typed on one row of keys.

A 41-year-old teacher who is accused of having killed another man and eaten pieces of the victim's body went on trial in Germany's capital. (https://fxn.ws/3ADTIfn)

Robin Hood’s former hideout is now a haven for nude hikers. A group of “naked ramblers” have taken to roaming Sherwood Forest in the nude, infuriating locals who have started a petition to have the Royal Society for the Protection of Birds (RSPB) which runs the park to “stop promoting nudity”. Robert Robinson, who organized the petition, claims he recently saw a group of 12 naked men frolicking in the forest near Robin Hood’s main hideout, the 1,000 year-old Major Oak tree. “Every day, in good weather, nudists can be seen. The police state it is an offense if we find it offensive, which we do.” Robinson added that with the nicer weather in England, the nudists have been coming out more regularly and “need to be discouraged”. “I’ve walked this area for 18 years, since June 2020 there are so many naked men walking around, it’s intimidating and alarming,” wrote another petition signer, Lynne Manjengwa. “When we challenged a guy, not sticking to the rules and not covering himself, he suggested we read the welcome to naturists sign from RSPB, which states, if we don’t want to see naked people, to go elsewhere.” Peter Wright, from British Naturism, told the BBC, the petition “discriminates against a minority” and its author has shown “disrespect” in publishing it. “We have the freedom to do what we want to do and we don’t want to be in people’s faces, go into high streets or in urban areas,” he said. “Naturism is about being in nature and being naked is quite natural and quite normal.” (https://bit.ly/3iwA5Q8)

A British stripper and her boyfriend were sentenced to jail on Tuesday for robbing a fellow exotic dancer of more than $11,000 in tips during a jealousy-fueled theft last January. 29-year-old Gemma Lyons and her 36-year-old lover Nicholas Proctor were given sentences of two and five years, respectively, for the brutal early-morning attack on former Honeypot gentleman’s club dancer Mihaela Sasarman. Prosecutors said Lyons became enraged and “hatched a plan” when a generous client that she had tried to entertain ended up showering the victim with piles of cash at the club in Maidenhead, Berks. Sasarman ended up earning over $11,000 on January 30th — the night preceding the crime. Early the next morning when Sasarman left the club en route to the subway, Lyons and Proctor stalked her before the man attacked. Authorities said Proctor punched the victim in her head and wrestled her bag away — causing the cash to spill onto the ground. Sasarman suffered a bruise and cut in the attack. “To find out a co-worker was responsible shook me,” Sasarman said in a victim impact statement. “I thought we would look out for each other and not prey on each other.” (https://bit.ly/3inx5VZ)

River Dave Overwhelmed By Offers And Support After Cabin Burns Down
https://www.sunnyskyz.com/good-news