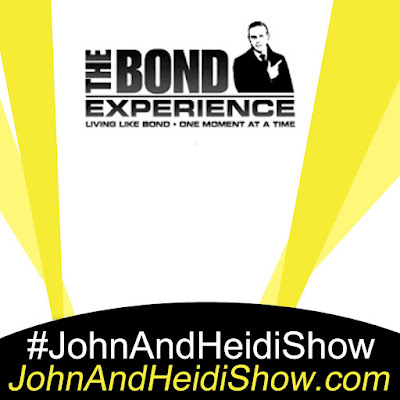 Today we visit with David Zarisky “The Bond Experience”
http://thebondexperience.com

Researchers from Penn State warn that social distancing and remaining six feet away from other people isn’t enough to stop the spread of viral airborne aerosols, such as COVID-19, while indoors. The recent study concludes that even six and a half feet may not be far enough to prevent infection inside a building. (https://bit.ly/3hEnKIG)

A new study shows women are nearly half of new gun buyers.(https://on.wsj.com/3nGuBFk)

A 25-year-old Florida man was arrested for DUI and leaving the scene of an accident after driving the wrong way down a street and crashing into another vehicle on his wedding day. (https://bit.ly/39pKSGw)

Folks on multiple social media outlets are continuing to rip celebrities for going mask-less at this year’s Emmy Awards. (https://bit.ly/3lGtfYx)

It is now being reported that the upcoming Sopranos movies “The Many Saints of Newark” had a scene featuring Edie Falco as Carmela Soprano that was deleted. (https://bit.ly/3Cz9uZG)

Tik-Tokers are now trading stocks based on what members of congress do. (https://n.pr/3EGxr3g)

Taco Bell has created a subscription service app that will allow people to get Tacos every day for $5 a month. (https://bit.ly/3kndBlx)

The South Korean Boy Band BTS was invited to perform at the UN General Assembly. (https://bit.ly/3hRMKw6)

Meghan Markle and Prince Harry are advocating for America to stop hogging COVID vaccines and ship their remaining supply to the third world. (https://bit.ly/3AzuCP4)

Meghan Markle and Prince Harry were named the world's most influential people on the cover of Time Magazine. (https://fxn.ws/3zhzXZZ)

A lethal dose of chocolate for a human being is about 22 lbs., or 40 Hershey bars.

Spain's panda family grew with the birth of twin cubs. The twins were born at Madrid Zoo to their mother, Hua Zuiba, and father, Bing Xing, a pair of giant pandas on loan from China. The births took place with a four-hour difference on Monday morning. Conservation efforts, including panda breeding in captivity, have brought the giant pandas from the brink of extinction. The species is now listed by the IUCN conservation group as “vulnerable.” There are about 1,800 pandas living in the wild in China and about 500 in captivity worldwide.

According to the Washington State Patrol (WSP), a man and a woman are accused of carjacking vehicles from dealerships during test drives in South King County. The most recent armed robbery took place on September 13th at Worldwide Auto Group in Auburn. According to the WSP, a man and a pregnant woman scheduled a test drive with the dealership. While on the test drive with an employee, the pregnant woman claimed to be nauseous and asked the driver to pull over. Once the car came to a stop on the side of Highway 167, the man punched the employee while the woman pepper-sprayed him. The employee told detectives the man claimed he had a gun and threatened to use it if the employee didn’t exit the vehicle. The pair took off with a silver 2012 BMW X5. They arrived at the Auburn dealership in a gray Honda Accord. It turns out that a Honda was also stolen from another dealership with the same tactics. Just like the robbery in September, the pair kicked the employee out of the vehicle and took off. Anyone with information on the stolen cars or the suspects is asked to contact Detective Ruth Medeiros. (https://bit.ly/3nMHe1L)

A man was arrested for allegedly shooting three people at his expected-child’s baby shower at a western Pennsylvania fire station Saturday during a feud over gifts. The chaos erupted at a hall at the Kinloch Fire Department when 25-year-old suspect Isiah Hampton got into a dispute with an unidentified woman who wanted him to transport the gifts from the party. The woman slapped Hampton, who was reportedly being abusive, and he then shoved her, the complaint said. A trio of men tried to subdue Hampton before he allegedly fired off three shots from the ground. A 23-year-old man, 19-year-old woman, and a 16-year-old boy were struck by bullets. All three victims are expected to survive. Hampton told police that one of the victim’s was shot when the firearm unintentionally discharged as the men wrestled the gun away from him. After the shooting, Hampton fled the fire hall with his partner, but was caught nearby by police. He was charged with aggravated assault and recklessly endangering another person. (https://bit.ly/3tX1azZ)