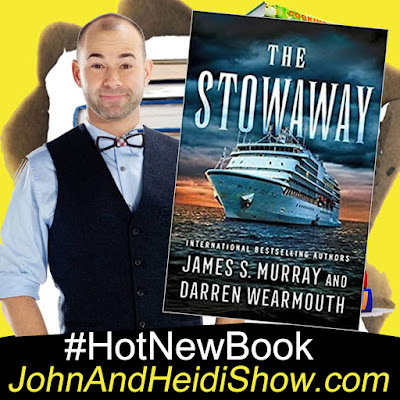 We will visit about his NEWEST NOVEL that's out right now!
THE STOWAWAY is available now at www.MeetMurr.com

In a new poll of 2,000 Americans, 2 in 3 people say they regret not spending more of their childhood in the great outdoors. The average respondent believes that learning how to properly camp is nearly impossible if you don’t get into it before you’re 11 years-old, or fishing by the time you’re 12. (https://bit.ly/2XY3RWy)

A new study claims academic success can end up leading to depression. (https://bit.ly/3F5QwMA)

An impaired driving charge has been laid against a man who came to the attention of cops by driving in circles in a Durham police station parking lot. The odd circumstance was summed up on the Durham police Twitter feed: “Driving impaired is a NO NO,” the message, posted Wednesday, said. “Driving impaired while doing circles and flashing your headlights in a police parking lot - definitely a NO NO. Please don't drive impaired.” The incident in question began around 1:45 a.m. Sept. 15 when an officer on foot noticed a red Cadillac being driven in circles in the parking lot of the Central West Division on Taunton Road, police said. The cop advised the driver to stop. “The driver did not comply and continued to drive slowly in and around the parked police vehicles while flashing his headlights,” police said. Eventually the Cadillac was boxed in and stopped by two cruisers. The motorist, who wasn’t identified, was arrested for impaired driving. (https://bit.ly/3nzd6Xw)

Two Co-hosts of ABC’s “The View” say the COVID tests that forced them to leave the show live-on-air were false positives. (https://n.pr/3B1zHj6)

The Netflix series "Tiger King" is getting a sequel. (https://bit.ly/3zKDEaO)

A new line of Pokémon-themed Oreo cookies are selling for thousands of dollars on eBay. (https://cbsn.ws/3of4xRX)

Amazon has released a robot for your home called "Astro" that can follow you around, play music, conduct video calls, and deliver you drinks. (https://bit.ly/3BbHyLr)

Prince William and Kate Middleton were spotting dining with their three kids at a beer garden just outside of London.(https://pge.sx/2ZC1xoz)

Under US federal law, clothing tags must last the lifetime of the garment.

Things are getting hairy for barbers in Afghanistan’s Helmand province, where the Taliban police have banned them from shaving or trimming beards in violation of Islamic law. (https://bit.ly/3EWEYLl)

Police officers gave a warning to a driver for safety issues after the driver was spotted towing a boat that appeared to be rigged to the trunk of a sedan. Eugene police says it received calls around 11:00 a.m. Tuesday about the car and boat near River Road and Division. Police contacted the flotilla on NW Expressway and Chambers. Officers said the boat is the driver’s home. Police added that the driver was warned about the hazards of towing the boat from the trunk. (https://bit.ly/3ly5MIW)

A Maine man faces multiple charges, including one charge for the misuse of license plates, after he was pulled over on a motorcycle in Durham last week. 24-year-old Kyle Smart of Berwick was pulled over at 4:30 p.m. on Thursday. Police officials say he was operating without a motorcycle license and crossed double yellow lines. Smart was pulled over on Dover Road. Deputy Chief David Holmstock explained on Monday that Smart illegally passed a vehicle on the left in the presence of a police officer. Further investigation revealed the two other violations. "Subsequent, Mr. Smart has taken to posting disparaging remarks on our Facebook page that we, in turn, have to keep removing. That is the full extent of the story at this point," Holmstock said. Smart is scheduled to appear in court on November 3rd. (https://bit.ly/39J8hm6)

She Prayed For Help During A Flash Flood. Marines Showed Up 45 Seconds Later
https://www.sunnyskyz.com/good-news