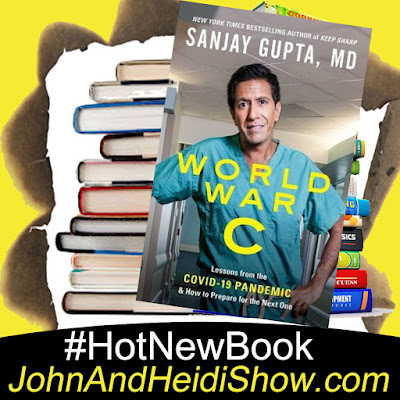 Today we visit with CNN chief medical correspondent Dr. Sanjay Gupta about his new book, WORLD WAR C: Lessons from the Covid-19 Pandemic and How to Prepare for the Next One. AVAILABLE NOW https://amzn.to/2Z06W8F

A new study claims that heavy marijuana users who are also vaccinated may be more susceptible to breakthrough cases of COVID-19. The study, published in World Psychology, found that those with a substance use disorder — a dependence on marijuana, alcohol, cocaine, opioids, and tobacco — were more likely to contract the coronavirus after receiving both of their vaccination shots. (https://bit.ly/3oQOIBb)

A Ferndale pastor is in jail after police say he tried to kill two Arenac County sheriff's deputies with his car. The terrifying ordeal happened Wednesday just off of I-75. The pastor's name is David Jones, and according to the Hilton Oaks Baptist Church Facebook page, he gave sermons regularly at the church. Court documents show Jones had a long history of drinking and driving, and his latest arrest was in August in Oakland County. "If you turn your vehicle around and intentionally collide with a police vehicle, you are going to be charged with attempted murder on police," Arena County Undersheriff Don McIntyre said. Two deputies were called to the convenience store just off the exit when they found Jones sitting in his car. Police say he was intoxicated and refused to cooperate and do anything the deputies asked. Moments later, they say Jones took off across the highway, pulled into a parking lot and then eventually slammed his car into the back of the building. "He struck their building, turned his vehicle towards deputies, accelerated, smashing our patrol car," McIntyre added. "Luckily our deputies were not injured." Even after the crash, Jones refused to get out of his car. Police say they had to break the windows. Court records show Jones has had eight drinking and driving offenses on his record. (https://bit.ly/3avujcx)

Ben Affleck and Matt Damon say they were supposed to kiss each other on camera for a movie, but the scene was cut. (https://bit.ly/3iTvjvQ)

A New York man attacked an employee at the Apple Store over its COVID mask rule. (https://bit.ly/2YB55GS)

Northwell Health, which employs more than 76,000 people as New York State's largest health care provider, has fired 1,400 of its workers after they refused to get vaccinated against the coronavirus. (https://bit.ly/3iBx7cL)

A new report says bacon prices are at the highest they've been in forty years. (https://bit.ly/3F5tDZx)

More than eighty runners were rescued after a blinding blizzard blew through a 50-mile Ultramarathon race in the Utah mountains this past weekend, dumping more than a foot of snow and leaving some runners hypothermic. (https://bit.ly/3iOu9S0)

Americans quit their jobs at a record clip in August, a new government report said Tuesday, with restaurant and hotel workers leading the mass exodus. A whopping 4.3 million people quit two months ago, the most on record dating back to December 2000 — and 300,000 more than in July, according to the Labor Department report. (https://bit.ly/3mOvdqf)

Less than 10% of criminals commit about 67% of all crimes.

An elderly man was seen leading Florida State Troopers on a slow-speed chase in a viral video. The bizarre encounter happened northbound on the Florida Turnpike somewhere near mile marker 9 just after 4:30 p.m. At least three Florida State Trooper vehicles can be seen following the man on his scooter, who is driving on the left shoulder. Decked out in a white golf hat and red polo shirt, he’s driving well below the Turnpike’s speed limit of 70 mph, the video clearly shows. Florida Highway Patrol told Fox News that troopers responded to the area and made contact with a 75-year-old Hispanic male who told them he had accidentally gotten on the highway and didn't know how to exit. The troopers escorted the man to the next exit ramp to a safe location off the highway. The Instagram user Sparrow Concepts shared the video. Commenters had a field day at the spectacle. "Riding dirty," wrote one Instagram user, invoking the 2005 hit song "Ridin’" by Chamillionaire. "This is why Miami’s car insurance is so high," wrote another user. (https://fxn.ws/3iD6wvD)

A man jailed for allegedly threatening the life of a woman transmitted the menacing message in sign language via a video text, Florida police say. 35-year-old Robert Sowle was arrested Monday evening on a felony charge and booked into the Pinellas County jail. According to a criminal complaint, Sowle sent the victim a video text on September 28th “describing in sign language ‘I’ll kill you. OK? I’ll kill you.’” The woman told police that Sowle, who is deaf, was upset because he believed she took his mail. Sowle lives at the Silver Lake mobile home park in St. Petersburg, though the landlord this month filed an eviction lawsuit against him and his ex-girlfriend for nonpayment of several months of their $1340 rent. Sowle’s relationship to the target of the alleged threat is unclear since the complaint contains redactions made by law enforcement officials due to “confidential victim information” contained in the document. The victim, cops say, “was in fear the defendant would cause harm to her.” Sowle relocated to Florida from Michigan, where his rap sheet included multiple convictions for domestic violence, as well convictions for assault and resisting police. (https://bit.ly/3Awz4gN)

JV Softball Player Pitches For Opposing Team After Their Pitcher Gets Sick
https://www.sunnyskyz.com/good-news