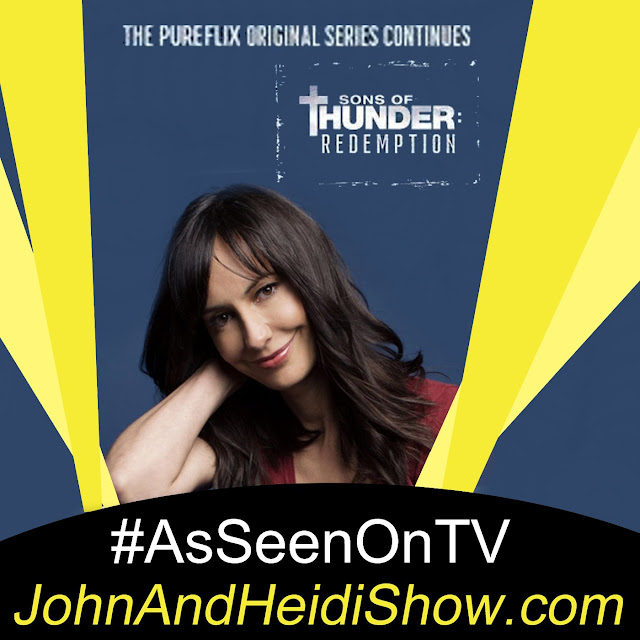 Today we visit with actress Charlene Amoia. She portrayed waitress Wendy in the sitcom How I Met Your Mother from 2005 to 2011. Amoia played Ellie, in the fourth American Pie film... also featuredin TV shows House, Glee and 90210.

She is now in the new Pure Flix spinoff show "Sons of Thunder: Redemption," that follows another former member of the Devil's Hand who is righting wrongs and spreading the love of Jesus. youtube.com/watch?v=2qgl8t0NWRc

Researchers (Brigham Young University) found that not all people taking selfies are narcissists. In fact, there are three main types: Communicators, Autobiographers, and Self-Publicists.

• Communicators take selfies primarily to engage their friends, family or followers in a conversation. They’re all about two-way communication, like someone sharing an “I voted” selfie.

• Autobiographers use selfies as a tool to record key events in their lives and preserve significant memories. Such users want others to see their photos, but aren’t necessarily seeking the feedback.

• Self-publicists are the ones we usually think about when it comes to selfie snappers, but it’s actually the smallest of the three groups. They are the people who love documenting their entire lives, hoping to present themselves and their stories in a positive light.

A single page of a Spider-Man comic book has been sold for over $3 million. The page, which depicts Spider-Man’s first time donning his infamous all-black suit, fetched $3.36 million at auction last week, becoming the “world’s most valuable page of original comic book artwork,” according to Heritage Auctions. The winning bidder hasn’t been revealed, but whoever it was clearly knew their Spider-Man history. The page came from the 1984 Marvel crossover series “Secret Wars”. In the story, Spidey encounters an alien symbiote — sound familiar? — who gloms onto his traditional red-and-blue suit, which he damaged in battle.

The trailer for Netflix’s “Texas Chainsaw Massacre” is here, and it’s as bloody and brutal as ‘Leatherface’ fans have come to expect from the movie series. The new film marks the ninth entry into the storied franchise, but ignores all 7 of the follow-up films to serve as a direct sequel to the original 1974 movie that changed the horror genre forever. The film hits Netflix on February 18. LINK: https://youtu.be/zcI6SFiK_yk

The 64th Annual Grammy Awards have been rescheduled — and moved out of California. The show will relocate to the MGM Grand Garden Arena in Las Vegas and will air live on Sunday, April 3. The ceremony will once again air on CBS and will stream live and on demand on Paramount+. Trevor Noah, host of The Daily Show, will return as master of ceremonies. On January 5 the Recording Academy initially announced the postponement of the show, which had been on the calendar for January 31 in Los Angeles. The ceremony was postponed over growing concerns about the Omicron variant.

Bob Saget’s famous friends are continuing to keep his memory alive following his sudden passing last month. John Mayer, Dave Chappelle, Seth Green, Jim Carrey, Chris Rock and Jeff Ross came together to host a “punk rock Shiva” for the late star at The Comedy Store in Los Angeles over the weekend. It marked the second event of this type, with the first held on Jan16. His family, close friends and fans returned to the scene to pack the club’s Main Room as a way to pay tribute to him in what turned out to be a sold-out and star-studded benefit for a cause close to Saget’s heart, the Scleroderma Research Foundation. Hosted by Stamos, Mayer and Ross — the show went down as a “loosely structured, free-for-all” according to one attendee.

The robe worn by Muhammad Ali before his famous 1965 fight with Sonny Liston is up for auction, and it could sell for over $500,000. Ali donned the garment on his way to the ring in his rematch with Liston — which many consider one of the most memorable fights ever. Ali not only knocked out Liston in iconic fashion in the ring (you’ve no doubt seen the picture of the KO), but the fight also marked the first time he ever boxed under the name Muhammad Ali. Bids will be taken by Goldin Auctions through Feb. 5. Current bid? $150K. LINK: https://tinyurl.com/2p83dnvd

Your eyes produce about a teaspoon of tears every hour.

In a feeding frenzy, sharks sometimes eat parts of their own body.

Shoes that were specific to left and right were not made until the US Civil War.

In the 1600s, French women wore high heels to show that they were too rich to walk.

In the UK a man robbed a woman’s apartment, cleaning out the place. He took absolutely everything, leaving only her engagement ring. Police showed up to investigate and found a man asleep next door in what used to be a vacant apartment. Only it wasn’t vacant now. The guy had moved everything from the victim’s apartment into the empty one next door and was now taking a nap on her couch.

Danielle Shapiro wanted to get her money’s worth at a $50 all-you-can-eat sushi buffet in Mountain View, California. But after indulging a little too much, including 32 rolls of sushi, her uncooked delights left her feeling a bit raw inside. Following the binge, Shapiro was rushed to the emergency room with severe stomach pains. That’s where she was diagnosed with gastroesophageal reflux disease, commonly known as acid reflux.

• Cranberries — You could play handball with cranberries? Cranberries have also been called bounce-berries because when they’re ripe, they bounce like rubber balls.

• How to Get Rid of Garlic Breath – Have garlic breath? Scientists found that apple, lemon juice, parsley, spinach, green tea, and mint were the most effective foods to neutralize the offensive scent of garlic.

• Why Onions Make You Cry – The strong smell of onions has nothing to do with why you’re crying as you cut them. When you cut into an onion, you release a strong sulfur compound that wafts upwards toward your eyes. When the gas reacts with the moisture in your eyes, it begins to burn, creating those all-too-familiar onion tears.

Lucy: “There’s just two things keeping me from dancing in that show.”