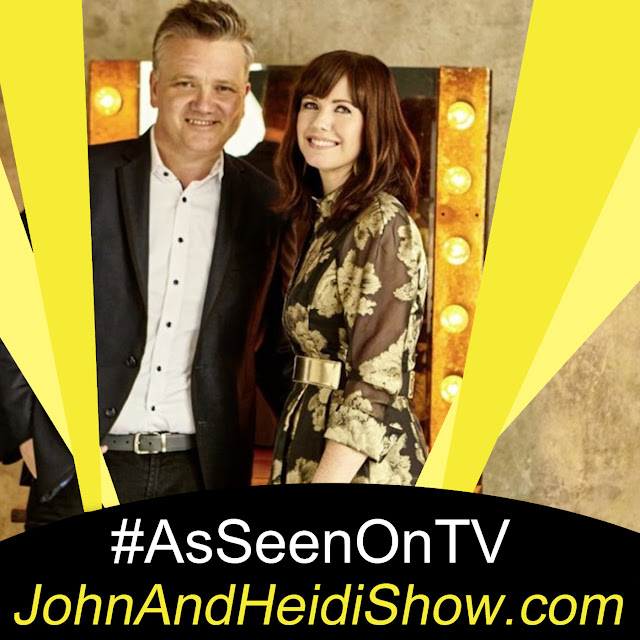 Today we visit with Popular Modern Hymn Writer Keith Getty. He and his wife Kristyn will be Celebrating Irish Culture on TBN, the world’s largest religious broadcaster. Part of a St. Patrick's Celebration with the popular recording duo on Thursday, March 17th, at 8/7c. This 1-hour celebration will feature foot-stomping Irish reels and jigs, cultural Irish dance, and sacred Celtic songs and melodies. Viewers can sing along with the Getty's best-known hymns like "In Christ Alone" and many others.

About Trinity Broadcasting Network:
TBN is the world's most watched faith-and-family broadcasting network, reaching over 175 nations with inspirational programming in 14 languages and on 32 global networks. TBN, the original pioneer of faith-based television, is expanding into other marketplaces such as publishing and innovative digital content in various formats, all designed to reach every viewer demographic with the life-changing message of hope and grace. To find out more about the TBN Networks, visit us at tbn.org

Everything You Do Is Right Day

Researchers at the University of California-San Diego say they’ve made a discovery that may help doctors treat acne for good. They’ve found a specific chemical in skin cells which fights off the bacteria that causes pimples to break out. While we know hair follicles play a role in zits developing, the new study found the skin cells around these hairs appear to be even more important in causing or stopping acne. It’s a long, technical story, but the bottom line is that they may soon come up with a therapeutic treatment for acne that has fewer or no side effects compared to current treatments, which can cause fetal abnormalities among pregnant women.

6% of people say they NEVER tip.

A British Columbia woman is spending $44,000 (Cdn) to clone her cat so he can live “forever”. When Kris Stewart’s beloved cat, Bear, was struck and killed by a car, she was heartbroken. Despite her grief, the Kelowna resident quickly began making arrangements to have Bear cloned. She had to store Bear’s body at the right temperature while frantically searching for a vet who knew how to perform a biopsy to collect his cells. Once that was done, she shipped them overnight to Viagen Pets in the US. The company likens the process to in-vitro fertilization through a surrogate, calling a cloned pet “essentially an identical twin that is born at a different time”.

The final episodes of “Ozark” are fast approaching. Netflix has announced that “Ozark Season 4 — Part 2” will debut on April 29. The streamer also released the first teaser for the second half of the season. Showrunner Chris Mundy spoke in January about the decision to split the final season in half, explaining that he and his team were trying to decide whether the show would end with Season 4 or Season 5. Quote: “Then Netflix hit upon the idea of saying, ‘We’ll [end with Season 4] but we’ll make it long. We’ll split it in this way’. That felt perfect.” LINK: https://tinyurl.com/3n3bf496

Tom Holland has notched his second top movie in a row with “Uncharted”, which made $44.1 million at the domestic box office over the weekend. The action-adventure’s impressive opening comes on the heels of Holland’s latest Marvel Cinematic Universe offering “Spider-Man: No Way Home”, which, in December, became the first film to make $1 billion at the box office worldwide since the pandemic began.

Simon Leviev, aka “The Tinder Swindler,” is saying goodbye to scamming women and has just scored an actual paying job. This time, he’s making money being his real self on Cameo. He joined the site last week and got a wave of requests from fans to make video messages. TMZ reports that he made $30,000 in his first 3 days, charging $200 a pop for personal videos and $2,000 each for businesses.


It’s been 3 years in the making, but the world’s largest cruise ship is finally ready to sail, or rather, cruise. Measuring a staggering 1,188 feet (362m), Royal Caribbean’s ‘Wonder of the Seas’ will begin its maiden voyage from Fort Lauderdale FL to the Caribbean on March 4. To give you an idea of its size, the 18-deck cruise ship has room for 7,000 guests and 2,300 crew members. Wonder of the Seas consists of 8 ‘neighborhoods’, one of which contains over 20,000 real plants, and its on-board features include a 10-storey zip line, the world’s “tallest slide at sea,” and a huge poolside movie screen. The 236,857-ton vessel was built in France, and was originally scheduled for delivery in 2021, but was pushed back due to delays related to the pandemic.

Twitter is expanding its crackdown on trolling and hate. The social media site is set to expand its “Safety Mode” feature, which lets users temporarily block accounts that send harmful or abusive tweets. Safety Mode will flag accounts using hateful remarks, and users who bombard people with uninvited comments, and block them for 7 days. Half of Twitter’s users in the UK, US, Canada, Australia, New Zealand and Ireland will now have access. Those users will also be able to use a companion feature called “Proactive Safety Mode”, which aims to proactively identify malicious replies and ask users to consider enabling the mode. Safety Mode can be turned on in settings for those who have access to it. Twitter has struggled to deal with abuse and harassment on its platform and now faces closer scrutiny from regulators.

According to mathematicians, there are 177,147 ways to tie a tie.

The gender-neutral word for niece or nephew is nibling.

The “birthday paradox” says that in a group of just 23 people, there’s a 50% chance that at least two will have the same birthday.

The bestselling Hot Wheels vehicle is the Chevrolet Corvette.

You can buy eel-flavored ice cream in Japan.

Question: According to research, we do THIS about 20% more on weekends than on weekdays. What is it?

September of last year, 39-year-old Anthony Hodge called 911 fourteen times in two hours from Five Points in East Nashville one Sunday night. He told dispatchers that a Koala bear was sending electric shocks to knock the phone out of his hand. The defendant called 911 while officers were present, and began rambling to Dispatch, then disconnected. Mobile Crisis was called, but the defendant refused to cooperate with alternatives to arrest. The defendant was taken into custody and transported to booking. Mobile crisis was notified that the defendant had been taken to booking. He is charged with making non-emergency calls to 911. https://www.scoopnashville.com/2021/09/man-claims-koala-bear-is-sending-electric-shocks-knocking-phone-out-of-his-hand-charged-with-misuse-of-911/

Hoover Dam (Nevada)
If you’re looking to see an American man-made marvel and get a little luck while doing so, head to the Nevada side of the Hoover Dam. At the monument of the dam’s dedication, there are a pair of 30-foot-tall bronze Art Deco statues known as the Winged Figures of the Republic. The figures’ feet have been rubbed shiny and smooth by countless visitors touching their toes for good luck.

Blarney Stone (Blarney, Ireland)
Located at Blarney Castle, the world-famous Blarney stone is known for its ability to bestow the gift of gab to those who kiss it — “blarney” means skillful flattery or nonsense. The stone is set into a castle wall and visitors must lean backward while holding on to an iron railing to be able to give it a peck.

Intihuatana Stone (Machu Picchu, Peru)
The Intihuatana Stone is a ritual stone located at the renowned archaeological site Machu Picchu in Peru. Visitors used to press their foreheads onto the stone, believing that would grant them visions of the spirit world. However, now the stone is roped off and tourists are not allowed to touch it.

Hagia Sophia (Istanbul, Turkey)
The Hagia Sophia is a 6th-century place of worship turned museum in Istanbul, Turkey, that is considered one of the world’s great monuments. Along with taking in its beautiful art and architecture, visitors can also test their luck at the famous wishing column, also known as the weeping column. If you stick your thumb into a small hole in the copper facing of the column and it comes out wet, you will be cured of all ailments.

Trevi Fountain (Rome, Italy)
Perhaps the most famous lucky fountain in the world is the majestic marble Trevi Fountain in Rome, Italy. Visitors fling a coin over their backs into the fountain to guarantee that they will return to Rome and find love. More than $1 million in coins is collected from the fountain every year and donated to a local charity.

Money Tree (Cornwall, England)
4 Money doesn’t grow on trees, but it sure looks like it does at St. Nectan's Glen in Cornwall, England. Along with supposedly being home to pixies and fairies, this serene, spiritual spot also has a tree whose trunk has been jammed full of coins by people hoping for good luck and financial prosperity.

Casa di Giulietta (Verona, Italy)
Casa di Giulietta, or the House of Juliet, in Verona, Italy, is a historic home once owned by the Cappello family. Their name sounding close to the name of the Capulets from Shakespeare’s fictional classic “Romeo and Juliet” led to it being considered the house of the tragic heroine. The home features a balcony and a bronze statue of Juliet in the courtyard below. Visitors, especially those who are unlucky in love, rub the statue’s right breast for good luck.

Gentleman from Paris (Havana, Cuba)
Locals and tourists looking for a little luck in colonial Havana head to a life-size bronze statue known as the Gentleman from Paris. Touching his finger is meant to bring prosperity, while stroking his beard will guarantee that you’ll return to Havana one day. Eager luck-seekers have rubbed the patina off in these spots, leaving his finger and beard a shiny gold.

Goose Girl (Göttingen, Germany)
Göttingen, Germany, is known for the Gänseliesel, or Goose Girl, a statue located atop an old well in front of the Old Town Hall. Just-graduated doctoral students from the nearby University of Göttingen will come decorate her with flowers and kiss her on the cheek for good luck after receiving their degree.

Point Zero (Paris, France)
Point Zéro des Routes de France is the spot from which every distance from Paris is measured. Located outside Notre Dame Cathedral, it’s marked with a brass plaque with a compass rose. The legend goes that if you walk over this point, your footsteps will bring you back to Paris.

City Trees And Soil Are Sucking More Carbon Out Of The Atmosphere Than Previously Thought  https://www.sunnyskyz.com/good-news