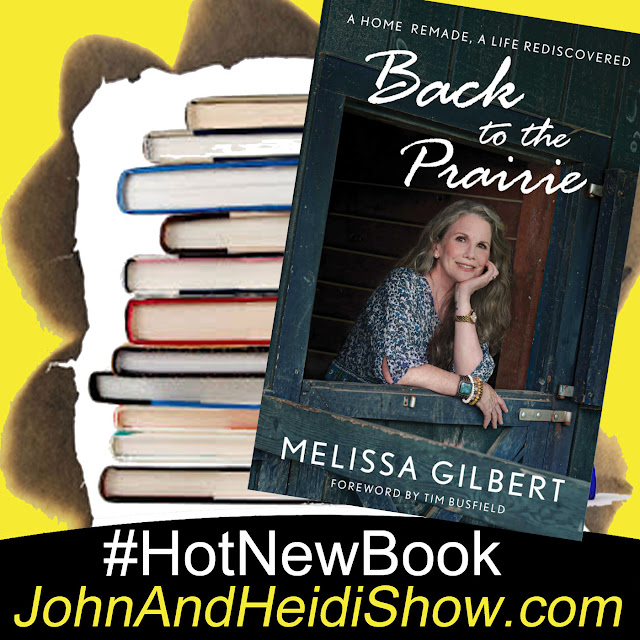 Today we visit with Melissa Gilbert. As a child, she was on NBC's super popular TV show “Little House on the Prairie” (as Laura Ingalls Wilder) in the 70s & 80s. She's also done several movie and TV projects since then. She now has a fun new book out called “Back To The Prairie”... it's available Now - https://amzn.to/3PP64JL

Sending emails is the “most frustrating” part of the workday for almost half of workers, according to a poll. The new survey of 2,000 office workers in the US found a lot of frustration in the workplace, with 48% agreeing that following up, sending reminders, responding and drafting new emails is the most irritating task in their day-to-day duties. Other top hair-pulling moments during their workdays include paperwork, hosting or sitting in on meetings, speaking with managers and team members, and helping customers.

Scientists have developed a new “smart” pacifier for newborn babies. A team at Washington State University says their wireless, bioelectronic dummy can monitor the health of babies born prematurely and is non-invasive. That means newborn babies won’t have to undergo twice-daily blood draws to measure their electrolyte levels. The smart pacifier will do that automatically as they use it.

Netflix is teasing “Stranger Things” events around the world ahead of season four’s release tomorrow. This week, the official Stranger Things social media accounts released a thread of coordinates related to locations in New York, London, Tokyo, Sydney, Milan, Cologne, Krakow, Barranquilla, Kuala Lumpur and Al-’Ula. The post reads: “Something big is coming. Find your city, and that’s where we’ll be. Over and out.” While it’s unclear what they’re actually teasing, the events in London and New York will take place today. A specific time has not yet been revealed. LINK: https://tinyurl.com/mprfuaw7

Jennifer Lopez will give fans an inside look at her life in the new Netflix documentary “Halftime”. The film will follow Lopez’s extensive career and will give fans a special look at her 2020 Super Bowl halftime performance alongside Shakira. In advance of the film’s June 14 premiere, Netflix has released the first look at Halftime. The trailer begins with Lopez explaining the difficulties of living life in “the public eye,” saying that she “really believed a lot of” the negative things said about her. Her fiancé, Ben Affleck, then says that he once asked her whether the negativity bothers her, to which he recalls her saying, “I expected this.” Halftime will premiere on Netflix June 14. LINK: https://tinyurl.com/nhz5b7cp

Robert Downey Jr. is getting his own reality TV show. He’s joining forces with Discovery+ for the project, which is about restoring classic cars. Under the working title “Downey’s Dream Cars”, the new series will see the “Iron Man” actor restoring cars that once spewed pollutants into environmentally-friendly transportation. Downey says his goal is to “showcase that it’s possible to keep the integrity of classic cars while leveraging new tech and innovation to make them more eco-friendly.” Downey’s Dream Cars will debut later this year.

Mountain Dew has announced the re-release of its fan-favorite “Typhoon” flavor, a tropical fruit-punch twist on the original. In a statement, the drink’s makers said: “The throwback flavor strikes again — MTN DEW TYPHOON is back. A storm of refreshing fruity punch on your taste buds.” Rumors of Typhoon’s return bubbled up online as Dew-hard fans expressed their excitement for the flavor that fizzled out a decade ago. But to try a sip of the pinkish-orange soda, fans will need to be a member of Dew HQ, the brand’s free rewards program. After joining the Dew crew, you can purchase 16-ounce cans of Mtn Dew Typhoon from the Dew Store for $12 beginning June 1. The drink was first released in 2010 as a finalist during the “DEWmocracy II” promotion.

Arby’s is selling a fast-food staple that it’s never offered before. Best known for its roast beef, the chain is adding a hamburger to its menu for the first time in its nearly 60-year history. Arby’s announced Monday it’s adding the “Wagyu Steakhouse Burger,” which costs $5.99, as a limited-time offering beginning Monday. The burger is a blend of Wagyu beef and ground beef. Wagyu, which means “Japanese cow,” refers to specific breeds of cattle and is known for its rich flavor and buttery tenderness.

The sudden jolt, or feeling of falling down as you’re drifting to sleep is called a “hypnic jerk”.

It takes 8 minutes for sunlight to reach Earth, and more than 5 hours to reach Pluto.

On average, the more features your phone has, the longer you spend in the bathroom.

Most toilets flush in the key of E flat.

The ashes of the average cremated person weigh 9 pounds (4.1 kg).

Question: If you’re average, you’re going to do THIS about 40 times this summer. What is it?

A London woman has been awarded £74,000 (US$93,000) after not being invited out for drinks with her co-workers. 51-year-old casino worker Rita Leher says she was left feeling “shunned” after being the only employee who wasn’t asked to go to a cocktail bar after work. An employment tribunal agreed that the exclusion was a “detriment at work” as she would “lose the opportunity to bond with colleagues”. It was also found that she was discriminated against after being denied training courses, which were granted to younger employees. The tribunal noted that after Leher had been uninvited for drinks, she took a period of stress leave to help cope with the exclusion.

11 True-Life Murders That Were So Shocking They Inspired Movies

1. The Parker-Hulme murder case, which inspired the movie Heavenly Creatures.

2. The Gainesville Ripper killings that were the inspiration for the movie Scream.

3. “The Winneville Chicken Coop murders” that inspired the movie Changeling.

4. The chilling story of “The Teacup Poisoner” which inspired the movie, The Young Poisoner’s Handbook.

5. “The Backpacker Murders” that inspired the horror film Wolf Creek.

7. The Zodiac killer which inspired the movie Zodiac.

9. “The Pied Piper of Tucson” killings which inspired the story behind the film Smooth Talk.

10. The DeFeo family murders which inspired The Amityville Horror.

11. Ed Gein AKA “The Butcher of Plainfield”, the basis for the killers in Psycho and The Texas Chainsaw Massacre

"Wine is constant proof that God loves us and loves to see us happy." - Benjamin Franklin