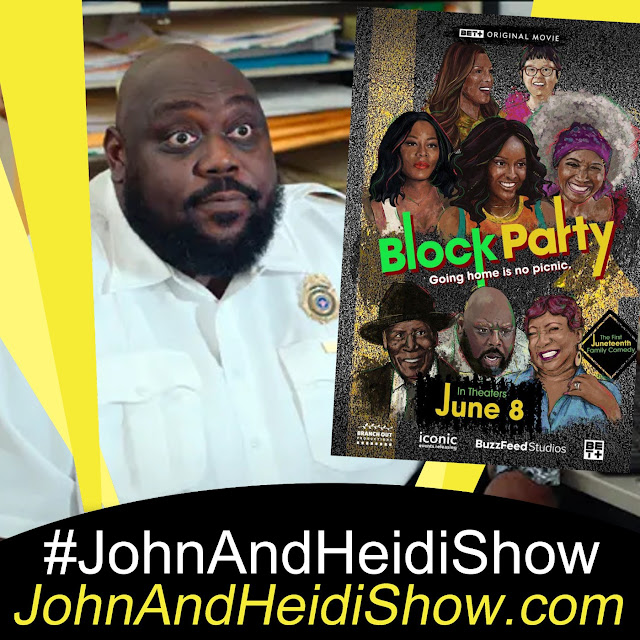 Today we visit with actor and comedian Faizon Love, best known for his roles in the comedy films The Meteor Man, Don't Be a Menace, Friday, B*A*P*S, Elf, The Replacements, Made, and Couples Retreat, as well as the voice of Sean "Sweet" Johnson in the video game Grand Theft Auto: San Andreas and his role as Wendell Wilcox on The Parent 'Hood.

A new study says just about 2 spoonfuls of alcohol is the maximum “safe” amount for people under age 40. The University of Washington’s School of Medicine analyzed the risk of alcohol consumption based on 22 health outcomes, including injuries, cardiovascular diseases and cancer, and found that younger people face higher health risks from alcohol. Adults age 40 and older without underlying health conditions may benefit from drinking a little more than those 2 tablespoons — such as a small glass of red wine a day — as it could reduce the risk of cardiovascular disease, stroke and diabetes. No health benefits were found from drinking alcohol among those age 39 or younger. Here’s how much the scientists recommend, according to the results of the study:

• For young men, the recommended daily amount of alcohol that’s “safe” before “risking health loss” is 0.136 of a standard drink a day (about 2.6 tablespoons of beer or 2 teaspoons of wine).

• For young women, a little over a quarter of a standard drink, or about 3.3 ounces of beer.

Because of the first-ever “Red” heat alert declared by the national weather service in England, with temperatures this week expected to reach into the low 40s (104°F – plus), theater chain Showcase Cinemas is offering free admission to redheads, so they can chill in the cool, air-conditioned space. The combination of red hair and a fair complexion makes it famously unpleasant (and dangerous) for gingers to spend a lot of time in the blazing heat that the country is experiencing.


Another Marvel film has taken a sharp second weekend drop, as “Thor: Love and Thunder” made an estimated $45 million over the weekend in the US, a 68% drop from its $144 million opening. That drop is roughly the same as what “Doctor Strange in the Multiverse of Madness” and “Eternals” experienced in their second frames. Despite the decrease, the latest Thor movie easily held onto the #1 spot. “Minions: The Rise of Gru” was second over the weekend, with an estimated take of $25 million, and in third is “Where the Crawdads Sing” with an estimated opening of $15.5 million.

‘Spider-Man’ actor Andrew Garfield, who just landed his first Emmy nomination for the limited series “Under the Banner of Heaven” has just signed on to star as Richard Branson in another project, “Hot Air”. Garfield will headline the limited series about the famous British entrepreneur, which is apparently the subject of a furious bidding war among the major streamers. Hot Air comes from Universal International Studios, with “Deadpool 2” director David Leitch at the helm, according to reports.

Now, instead of having to see your friend’s Wordle results on social media, you’ll be able to actually play it with them. Wordle owner The New York Times has partnered with Hasbro to create the board game “Wordle: The Party Game.” The new analog version lets up to 4 players take turns being the “Wordle Host” and writing down a 5-letter secret word. The others then compete to guess what the word is, in the fewest attempts. There are also 3 variations of the main Worldle game included called “Fast”, “Timed” and “Team” modes. Wordle: The Party Game comes out Oct. 1, and will sell for US $19.99. LINK: https://tinyurl.com/566hw4ys

Scientists says cats are not as clever as we think. The thought processes of 15 cats were tested by attaching food to the end of lengths of string and observing whether they could figure out that pulling the line brought the treats closer. The cats had no problem with tackling single pieces of string. But when faced with two options, experts discovered that unlike their canine counterparts, cats were unable to consistently pick a baited string over a dummy.

A survey found that nearly half of men have said “I love you” by accident.

Harvard administrators are worried too many students are receiving straight-A’s.

The most popular drinks in America are beer, vodka and red wine.

Shark Week kicks off July 24th on Discovery, and I’ll be glued to the TV.

Question: 15% of us say we’ve taken a day off work for THIS questionable reason. What is it?

Answer: “I stubbed my toe!”

In Argentina police stopped a man and his daughter because he was driving erratically. Imagine their surprise when they realized the dad was blind. He was driving through town with the help of his 13-year-old daughter. Police say that she turned the steering wheel while he changed gears, accelerated and braked according to her instructions.

• I see by your beer that you like beer.

• Boy, do you suck at staring contests. I’ve been having them with you all night, and you’ve lost like 12 times in a row!

• Pick a card, any card. Hey relax! OK, OK…I’ll wait until you’re done in the restroom.

• I’ll tell you what. Let’s get out of here and go to this place I know. We’ll need to pick up a mattress on the way.

"My tastes are simple: I am easily satisfied with the best." - Winston S. Churchill


“My dear, you are ugly, but tomorrow I shall be sober, and you will still be ugly.” - Winston S. Churchill

A new type of “supercharged” tree could help fight climate change. Living Carbon, a San Francisco-based startup, says it has created a genetically modified hybrid poplar tree, which grows up to 53% faster, enabling it to absorb about 27% more carbon dioxide – thus helping to minimize the damage of climate change. Carbon dioxide has grown rapidly in the atmosphere since the beginning of the Industrial Revolution, leading to extreme climate effects. The company plans to plant about 4 million trees by 2023. Living Carbon says if it doubles its existing acreage of planted trees every year, by 2030 it will have removed 604 million metric tons of carbon, 1.66% of global emissions in a typical year.