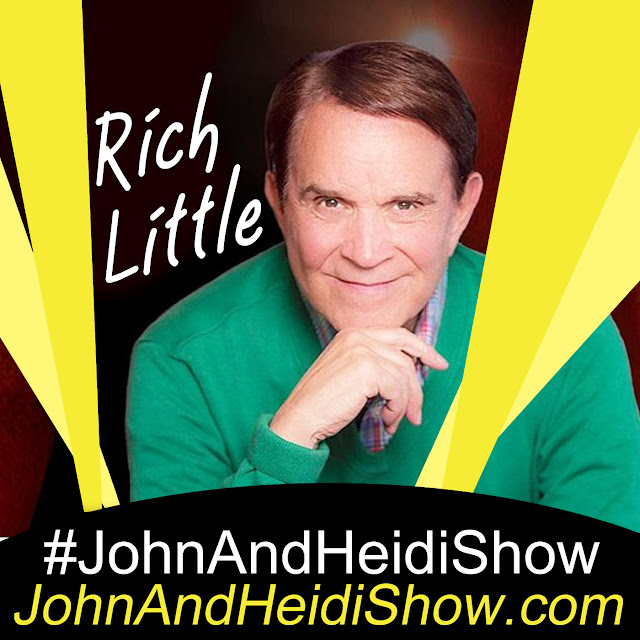 Today we visit with the world's most recognized impersonator, renowned comedian and impersonator Rich Little! He has an updated new book (with 100 more pages). People I've Known and Been, by Rich Little (AVAILABLE NOW - https://amzn.to/3PC4ACc ) All sales of the newly updated release go to benefit veterans through the Gary Sinise Foundation. Rich Little is the center square in The Hollywood Museum Squares (Voice of Paul Lynd) https://www.youtube.com/watch?v=XqHvHEUzvTQ

Rich Little has presented at the Emmys in the voices of John Wayne, Johnny Carson, George Burns and President Reagan, known for doing over 200 Prominent Personalities And 12 U.S. Presidents, you can see his amazing show at the Tropicana in Las Vegas, each Thursday through Sunday! https://www.troplv.com/entertainment/rich-little

Ladies, if your husband doesn’t remember to pick up milk on the way home or forgets your birthday, it may not be his fault. Research shows men are worse than women at remembering to do things in the future. Rather than simply not listening when asked to do something, it seems that they forget what they were told.

Super skinny people are more likely to be couch potatoes than those with a normal or high body mass index (BMI), a new study says. Researchers in China have found that it’s not more activity and less food which keeps many people fitting into a size small. The author of the study says the researchers “expected to find that these (very thin) people are really active”, but the study found “They had lower food intakes and lower activity, as well as surprisingly higher-than-expected resting metabolic rates”.

AMC has announced a new spin-off for “The Walking Dead” next year that will star Andrew Lincoln’s ‘Rick Grimes’ and Danai Gurira’s ‘Michonne’. The new limited series was revealed at The Walking Dead’s San Diego Comic-Con panel, and looks to “continue the journey and love story” of Rick Grimes and Michonne. AMC says the series will “begin with 6 episodes in 2023,” leaving the door open for it to be more than a mini-series. A seriously injured Rick Grimes was last seen in Season 9 of The Walking Dead, being flown away by a helicopter. Michonne left the show a season later after discovering Rick may still be alive. It was also revealed that this series will replace the planned Rick Grimes movie.

Hugh Jackman, has lined up a new gig: he’ll voice ‘Big Greg’ in the upcoming Hulu Original animated comedy series “Koala Man”. The comedy is about a middle-aged dad named ‘Kevin’ and his not-so-secret identity, whose only superpower is a burning passion for following rules and snuffing out petty crime in the Australian town of Dapto. He’ll do whatever it takes to defeat villainous masterminds, supernatural horrors, or worse: jerks who don’t put their garbage bins out on the proper days. Jackman, who’s currently headlining “The Music Man” on Broadway, will play the most well-liked man in Dapto and the head of the Town Council. No airdate has been set.

As more and more electric, automated and connected vehicles hit the roads, a new report says drivers should be aware of the many cybersecurity risks could emerge. The new report by Deloitte Canada calls modern vehicles “super-computers on wheels”, containing hundred of parts, which naturally contain “systematic vulnerabilities, or cybersecurity gaps that widen the likelihood of a device being compromised.” What kind of risks are we talking about? Deloitte’s report mentions GPS tracking and stalking, targeted malware, and control of vehicle acceleration and braking. It also identifies an incident last year when 25 automated vehicles owned by a transportation company were hacked and remotely accessed by a teenaged hacker, who proceeded to determine each vehicle’s exact location, whether it was occupied by a driver, and, most significantly, ran commands on it remotely. Deliotte says it is the responsibility of all manufacturers to better understand each individual part that makes up a vehicle, and collectively evaluate the risk each part brings forward.

The English language is said to be one of the happiest languages in the world – the word “happy” is used 3 times more often than the word “sad”.

The word “Goodbye” originally comes from an Old English phrase meaning “god be with you”.

One-quarter of the world’s population speaks at least some English.

Some English words exist only in plural form, such as glasses, binoculars, scissors, tongs and pants.

The word “swims” is still “swims” when turned upside down.

Question: One in 5 adults say they still have an emotional response to THIS sound. What is it?

Authorities in California recently received numerous 911 calls from worried drivers. On the side of Highway 101 was a very strange sight, which prompted the San Luis Obispo Police Department to post on its Facebook page: “Yep, it’s a coffin. Yep, it was on Santa Rosa near Walnut yesterday and yep, it’s never been occupied.” So why was there an empty casket on a busy freeway? Apparently, it had been found abandoned outside a building, and a member of the transient population decided to push it to a swap meet to sell it. She was taking a break when police found the coffin on the side of the road. It eventually wound up at its destination. No word on whether it was sold.

SIGNS IT’S BEEN A HOT SUMMER:

• Arsonists taking week off to set fires at seashore.

• Drivers spraying themselves with ‘Pam’ to keep from sticking to car seats.

• Kids using asphalt instead of ‘Play-doh’.

• Before telling you the temp, your thermometer says, “My friend, you better sit down.”

• Heatstroke making you so delirious you find watching golf exciting.


"People who think they know everything are a great annoyance to those of us who do.” - Isaac Asimov

A good Samaritan made sure that a stranded bride made it to the church on time, in an adventure fit for the big screen. As detailed on TikTok by Marksteen Adamson, who saved Anastasia Medvedskaya’s big day, he was driving through London when he spotted her in a white gown, flower crown and veil looking “confused and flustered” in a crosswalk. The bride flagged him down to ask for a ride to the church, where her groom and guests were waiting. She explained that she had been trying to hail an Uber, but 3 different drivers had canceled on her at the last minute, leaving her 45 minutes late to her own wedding. Adamson told the bride and 2 people in her wedding party to “jump in,” and they all headed to the chapel. The video ends with Adamson delivering the bride safely to the church, where she is met by the vicar. The TikTok has, of course, gone viral. LINK: https://tinyurl.com/2xujux6k