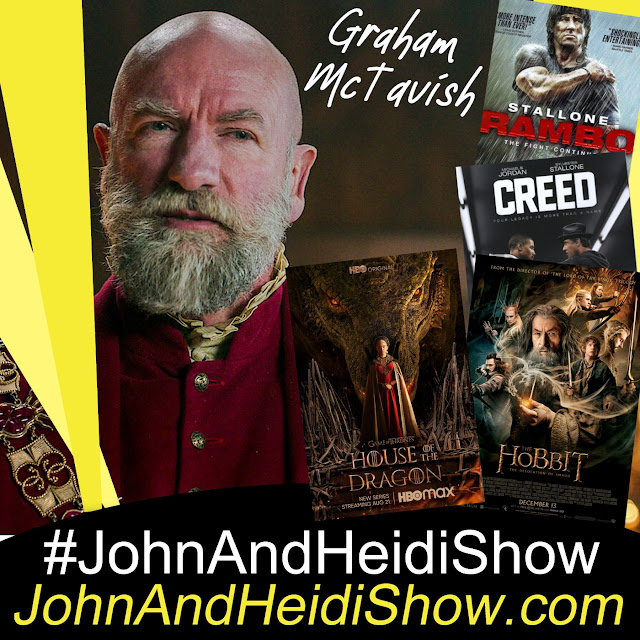 Graham McTavish, a Scottish television and film actor, best known for his roles as Dougal Mackenzie in the popular TV series "Outlander" (2014-16), as Dwalin in the "The Hobbit" trilogy for Peter Jackson (2012-14) as well as the Saint of Killers in AMC's series "Preacher", based on Garth Ennis and Steve Dillon's cult comic book series (2016 onwards). He also starred alongside Sylvester Stallone in "Rambo" (2008) and "Creed" (2015), making him the only actor to perform opposite Rocky AND Rambo. He is also known for his roles in numerous other TV shows and movies including "Red Dwarf" (1998), "24" (2009), "Rome" (2004), "The Finest Hours" (2015) and "Colombiana" (2011). As well as extensive theatre work throughout the UK including The Royal Court, and The Royal National Theatre, he is well known for his voice work on games and animated TV, including "Uncharted 2, 3, and 4", "Call of Duty", "Dante's Inferno", Loki in "Hulk v Thor" and "The Avengers", "Teenage Mutant Ninja Turtles" and "Kung Fu Panda"


If you watch any show featuring teenagers, you’ve probably seen some variation on the joke that comes up when Facebook is mentioned. The kids either say, “No one uses Facebook anymore,” or “What’s Facebook?” An exaggeration? Sure, but maybe not by much. According to the Pew Research Center, which regularly researches tech-usage, the favorite social media platform of US teens aged 13-17 during April and May of this year was used by 95% of respondents. And guess what? It’s NOT TikTok! So, which is it? Well, definitely not Facebook, either. Pew reports that 95% of teens surveyed used YouTube during that 2-month period. Number 2? TikTok, at 67%. Teens were also asked how often they are using the sites, ranging from “never” to “constantly.” YouTube is again at the top of the list, for constant use (19%), and TikTok is number 2, at 16%. 15% of kids reported using Snapchat constantly, and 10% use Instagram as their go-to social media site. They clear loser in the survey was – you guessed it —Facebook. Seven years ago, it was used by 71% of teens. That number has now dropped to 32%. Twitter and Tumblr usage is also down among teens.

These days, more and more adults are picking thrill-packed adventure vacations over relaxing by the pool. Rather than a traditional beach break, a survey of 2,000 adults over 40 found that 4 in 10 are choosing getaways that involve hiking, horseback riding, cycling or skiing. Also popular: riding rollercoasters, wild camping, snorkeling, kayaking, mountain climbing, and zip lining. And of those yet to experience such activities, 73% are seeking to be more active following the events of the pandemic. More than half (56%) said they are looking to make more memories while they can, and 49% are seeking to “make vacations fun again”.

Jonah Hill has announced that he will not be promoting his soon-to-be-released documentary film — or any upcoming projects for the foreseeable future — to avoid the anxiety attacks he often suffers during press tours. The 38-year-old actor released an open letter to share and explain his decision to cease promoting any new movies indefinitely in order to focus on his mental health. Hill — whose new documentary “Stutz” focuses on his mental health struggles — said that for nearly 2 decades, he has been inflicted with anxiety attacks that are worsened by media appearances and public events. In the letter, Hill says: “Through this journey of self-discovery within the film, I have come to the understanding that I have spent nearly 20 years experiencing anxiety attacks.” The documentary, directed by Hill, focuses on his struggles with mental health and features his own therapist.

Owen Wilson has a bone to pick. He says he was “scolded” by Marvel Studios for accidentally leaking some hush-hush details about the unreleased second season of “Loki.” Marvel is known for its strict policy on revealing any details on upcoming projects, and has called out stars in the past for breaching the rules. Wilson, who plays ‘Mobius’ in the hit Disney+ show, told ComicBook that the show is currently being filmed in London, then said: “We’ll see what happens with this one. I immediately get kind of self-conscious because [Marvel are] so kind of uptight.” When asked if he had ever been scolded by Marvel, Wilson said: “Yeah multiple times.” Last year, he landed himself in hot water after revealing the ‘Loki’ character had a mustache.

CBS has laid-off 25 staff and employees of the Dr. Phil Show.

Mathematicians say you have better odds of winning an Oscar than you do of winning the lottery.

A new poll says 49% of Americans think marijuana is good for society.

One in 6 people say they’ve created social media accounts for their pet.

There are more barrels of bourbon in Kentucky than there are people (10 million to 4.5 million).

One of the side effects listed on an Aspirin package is ‘headache’.

If sound could travel through space, the noise of the sun on earth would be the equivalent to a train horn from 1 meter away.

Question: You are more likely to do THIS at 6pm than any other time of the day. What is it?

A Nevada woman is now the legal owner of an entire neighborhood – after the title for her $595,000 home mistakenly included a further 84 properties worth an estimated $50 million. The unnamed woman intended to buy one home in Sparks, near Reno. But when she filed documents with the assessor, it was noticed that there was a massive error, and she had an additional 84 properties and 2 common spaces. The chief deputy assessor for Washoe County said it appears to have been a typing error made by the firm Westminster Title. That meant that the woman who planned to purchase just one property ended up being given the title deeds for scores of others too – many of which have already been sold, and had homes built on them. Those involved are working on a resolution.

Check out the 10 stunning (and 10 run-of-the-mill) cities for residential views below, followed by key insights from our report. (Click here to see where your city ranks.) https://lawnlove.com/blog/cities-with-best-residential-views/

A pessimist is a person who has had to listen to too many optimists.