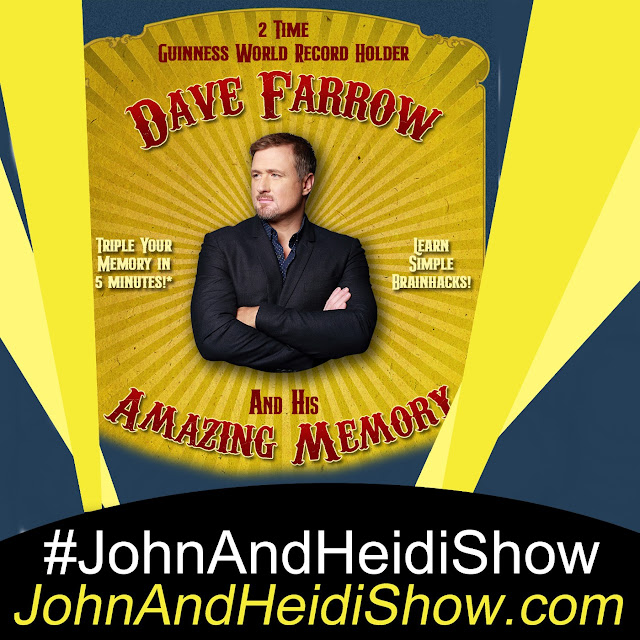 Today we visit with memory expert and Guinness World Record holder Dave Farrow about simple memory tricks that can boost your productivity and better your mind.

Dave earned the Guinness World Record for memory by recalling the exact order of 59 decks of shuffled playing cards. He went on to create ‘'The Farrow Method,’ a memory system to help combat his severe dyslexia and ADHD, which was backed by a double blind neuroscience study at McGill University.

He has an audiobook “3x Your Memory in One Hour: Farrow Method Memory Mastery in a Month” available now = https://amzn.to/3zTagCt


Appliance costs have risen 7.8% over the last year and that homeowners will spend 500% more to replace an appliance, rather than repair it, in 2022.

See the full report on how much Americans will spend on appliances over time: https://housemethod.com/home-warranty/how-much-americans-spend-home-appliances-over-time/

At this rate, Americans will spend at least $10,620 on appliances over the next 30 years.

The price of a dishwasher has increased on average $205 since 2022.

The average family could save around $330 per year by repairing existing items rather than replacing them. If 122 million national households followed this trend, the savings would reach $40 billion.


Exercise does not compensate for a poor diet, according to researchers from the University of Sydney. A new study found that even if you spend all day and night in the gym or running laps, you’re still better off steering clear of fatty, processed foods. The team concluded that high levels of physical activity do not counteract the detrimental effects of a poor diet on mortality risk. They found that those who both exercise frequently and stick to a healthy diet have the lowest risk of death.


At last, there’s a solution to the ongoing question of which host — Mayim Bialik or Ken Jennings — will ultimately lead “Jeopardy!” The answer: Both. Sony Pictures Entertainment has entered into long-term deals that will have the 2 hosts continue to split duties on the popular syndicated game show, according to a source, while retaining Bialik to host primetime editions of the show as well as the new “Celebrity Jeopardy!” show expected to start up at ABC. With Sony eager to boost more versions of the program, more than one host was required. Bialik continues to work on the Fox sitcom, “Call Me Kat,” which has been scheduled for a second season.


It turns out that ‘Eddie Munson’ was such a massive breakout from “Stranger Things 4” that the character saved actor Joseph Quinn from a prolonged detainment at an airport. On “The Tonight Show,” Quinn told Jimmy Fallon that he nearly missed the interview because he got detained by U.S. immigration. Quote: “I was taken into, I guess what you could call it more of a dungeon. And I was asked to wait there for about 20 minutes and then I was summoned to this desk where someone asked me, ‘What are you doing in the United States, sir?’ I said, ‘I’m actually here to meet Jimmy Fallon on ‘The Tonight Show.’ And he didn’t believe me.” It wasn’t until a second immigration officer recognized Quinn as Hellfire Club leader Eddie Munson that Quinn was allowed to enter the country.

There’s nothing quite as relaxing as a Sunday afternoon siesta. Or, a nap on ANY day, really. That’s why it pains me to see this: People who regularly nap have a greater chance of developing high blood pressure and having a stroke, according to a new study. But it may not be the actual act of sleeping during the day that’s doing the damage, says Michael Grandner, who directs the Behavioral Sleep Medicine Clinic at the Banner-University Medical Center in Tucson (and was not involved in the study). He says the connection may be that those who nap often tend to be people who sleep poorly at night, and while “Poor sleep at night is associated with poorer health, naps are not enough to make up for that.” Study participants who typically napped during the day were 12% more likely to develop high blood pressure over time and were 24% more likely to have a stroke compared with those who never napped, according to the study published this week in “Hypertension”, an American Heart Association journal.

It takes 200 muscles to take one step.

The Bermuda Triangle isn’t any more likely to cause a mysterious disappearance than anywhere else.

The inventor of revolving doors did so because he hated opening doors for women.

Question: 2% of people say they have never washed THIS. What is it?

Phone-obsessed Hong Kong residents are getting some extra help, so they won’t be forced to remove their faces from their screens at intersections. In an experiment aimed at improving pedestrian safety, devices installed at several road crossings project a red light onto the edge of the sidewalk — as well as any pedestrians standing there — whenever the “Don’t Walk” signal is engaged. The Hong Kong Transport Department says the devices address risk factors such as “inattentiveness” and “heedless crossing”, which have been exacerbated by increased phone usage. The new system is currently in use at 7 crosswalks in the city, and will be monitored for effectiveness. If the 6-month pilot project is a success, the devices will be implemented more widely. A recent survey found that out of 100 Hong Kong pedestrians entering a crosswalk, at least half were interacting with their cellphones.

➠ Rickey Henderson missed several games due to frostbite – in August. He had fallen asleep on an ice pack.

➠ Wade Boggs once threw out his back while putting on a pair of cowboy boots. Sammy Sosa did the same thing while sneezing.

➠ Marty Cordova had to go on the injured list after burning his face in a tanning bed.

➠ John Smoltz went on the DL after burning his chest – by ironing a shirt…while wearing it.

➠ Nolan Ryan missed a game after being bit by a coyote.

➠ Steve Sparks dislocated his shoulder attempting to tear a phone book in half.


"It is not easy being a mother. If it were easy, fathers would do it."

Police Sergeant Performs Act Of Kindness For Kids At The Lake
https://www.sunnyskyz.com/good-news