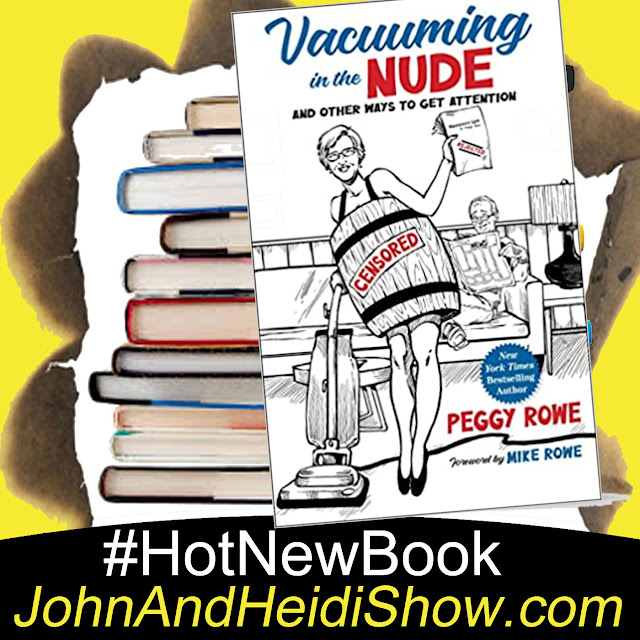 Today we visit with Peggy Rowe, author of VACUUMING IN THE NUDE and Other Ways to Get Attention. She is also the mother of Mike Rowe (Dirty Jobs)

The more time a person lives under a democracy, the more likely she or he is to support democracy: It’s easy to fall for a charming strong-man—that waggish autocrat who promises you stability, order and no silly distractions like civil liberties and an open press. Soul-crushing annihilation of personal freedoms? Gimme’ some of that, big boy. So it came as a surprise that a study in Science found that when you give people even a single taste of the whole democracy thing, well, it’s like what they say about potato chips, you want to eat the whole bag. But hey, let’s keep this one secret. Nothing like a peevish dictator to mess up a weekend.

Statistical analysis reveals Mexican drug war increased homicide rates: That’s the thing about any war—the homicide part is kind of the whole point. Still, as a paper in The American Statistician showed, it’s always a good idea to crunch the numbers. So let’s run the equation: X – Y = Z, where X is the number of people who walked into the drug war alive, Y is the number who walked out and Z is, you know, the dead guys. Yep, looks like it adds up. (Don’t forget to show your work!)

Scientists Discover a Difference Between the Sexes: Somewhere, in the basement warrens of Northwestern University, dwell the scientists who made this discovery—androgynous beings, reproducing by cellular fission, they toiled in darkness, their light-sensitive eye spots needing only the barest illumination to see. Then one day they emerged blinking into the light, squinted about them and discovered that the surface creatures seemed to come in two distinct varieties. Intrigued, they wandered among them—then went to a kegger and haven’t been seen since. Spring break, man; what are you gonna’ do?

Delta Air Lines told an unaccompanied child's father that his daughter had not been picked up from the airport a week after the flight because the airline's system failed to record that she had been collected. Richard Fritz, from Detroit, Michigan, was told that his 13-year-old daughter was "never released" from the gate when he went to check her in for a flight back home to Burlington, Vermont in the spring. "When I returned her to the airport a week later, the agent who was trying to check her in said 'our system says she is still waiting for you to pick her up at the gate from last week'," he told Insider. Fritz said he asked why he or the child's mother was not called if the system indicated that she was still sitting at the gate for a week. He claims it is the second occasion that this had occurred after a similar incident two years ago. "They laughed it off and said sometimes the system does not alert us if nobody picks up the child," he said. "I was given no explanation, just that they never released her at the gate. I've not heard back from Delta and I've tried to make complaints." The father paid the $150 unaccompanied minor fee for each way and he has used its service to fly his daughter from Vermont to Michigan many times before. He claims that the airline is not consistent with its safety measures when he collects her from the airport. "Sometimes they will check her bracelet number and ask me for a photo ID, other times she's just come off the plane and I've been allowed to take her," he said. "It makes me upset that somebody could have grabbed my daughter or taken off with her and nobody would have known."
https://news.yahoo.com/delta-told-father-had-not-093835817.html

“Ozark” star Jason Bateman is sticking with Netflix for his next project. He signed on to star in “Carry On”, a new drama from “Jungle Cruise” director Jaume Collet-Serra. “Rocketman” star Taron Egerton will co-star. Carry On tells the story of a TSA agent who is blackmailed by a mysterious traveler to let a package go through security for a Christmas Day flight. Sources say Bateman will star as the mysterious traveler. He has a long history with Netflix, which famously revived “Arrest Development” in 2013. Bateman also starred in Ozark, and in 2019, he won the Primetime Emmy for directing the episode “Reparations.”

SCOOP OF THE DAY: Brought to you by BetterCreditCards.comA North Carolina credited his $100,000 lottery win to "fate" after he used a newfound lucky penny to reveal the prize on his scratch-off ticket. John Grant, 59, of Bolivia, told North Carolina Education Lottery officials he bought the Fabulous Fortune scratch-off ticket when he stopped for gas at the May Way Company in Bolivia. Grant said he picked up a lucky penny he spotted on the ground next to his truck and used it to scratch off the ticket. "I guess it was fate," Grant said. The penny helped Grant reveal his $100,000 prize. "My heart started beating real fast," Grant said. "I wasn't sure what I was seeing." Grant said most of his winnings will go into savings, but he might use some to purchase a new Chevrolet Silverado truck.
https://www.upi.com/Odd_News/2022/09/01/lotto-North-Carolina-Education-Lottery-lucky-penny/4471662060085/

A German martial artist nicknamed "Hammer Hands" broke a Guinness World Record by using his bare hands to chop through 68 baseball bats in one minute. Muhamed Kahrimanovic, whose punching and chopping skills earned him the nickname "Hammer Hands," took on the record for most baseball bats broken with the hands in one minute on the Milan, Italy, set of Lo Show Dei Record. Kahrimanovic earned the record successfully by chopping through 68 wooden bats in one minute. The martial artist previously broke the record for most coconuts smashed with one hand six times, most recently earning the title by destroying 148 coconuts in the time limit.
https://www.upi.com/Odd_News/2022/09/01/italy-Guinness-World-Records-baseball-bats-broken-with-the-hands/2521662054807/

The Mona Lisa has no eyebrows. Shaved eyebrows were the fad when she was painted.

Question: 22% of men say they do THIS when they are sad. What is it?

Tarpon Springs, Florida police were called to the home of Roxelle Wilson on a report of domestic violence. It was her choice of weapon that merited inclusion in the Bozo Report. She admitted that they were both intoxicated and involved in a verbal argument when she hurled a raw steak at him. He escaped serious injury as it was not a bone-in cut of meat. She’s been charged with domestic assault and was booked into the county jail. No word on the fate of the steak.

• When you order Diet Coke at a drive-thru, but don’t realize they gave you regular Coke until you’ve pulled away.

• People who push both elevator buttons ‘to speed things up’.

Education is learning what you didn’t even know you didn’t know. - Daniel J. Boorstin

Man Becomes Principal At Elementary School Where He Worked As A Janitor
https://www.sunnyskyz.com/good-news