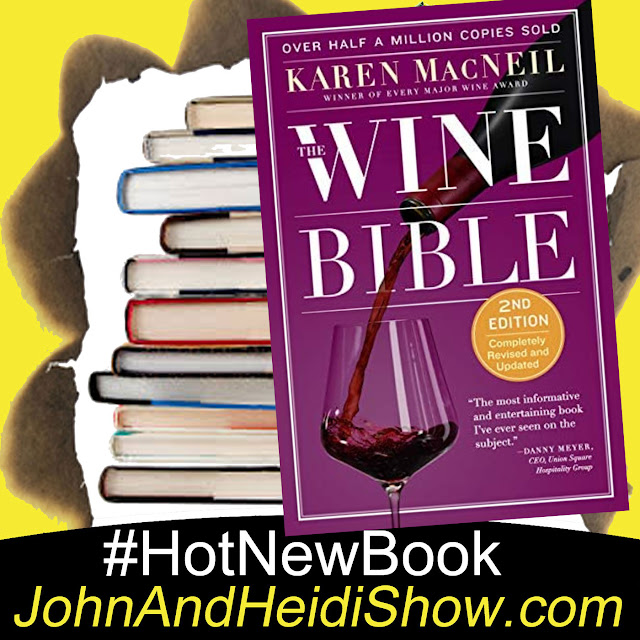 Today we visit with Karen MacNeil, author of “The Wine Bible”

If you’re looking to survive a zombie apocalypse, your best bet is to flee to Florida. Inspired by the US Centers for Disease Control and Prevention’s Zombie Preparedness guide (yes, it’s a thing!), researchers at Lawn Love analyzed 26 key factors that measure “zombie preparedness” across 200 US cities. Taking into account things like the number of local supermarkets and hunting supply stores, the number of people in poor health, and the number of basements or bunkers under local homes, Orlando, Florida was deemed the best city to be in to survive a zombie apocalypse. Tampa and Miami also finished in the top 10. The worst place to be? Sunrise Manor, Nevada.

Lockdown babies may be slower to communicate but learn to crawl faster. A study suggests that babies born during Ireland’s first covid-19 lockdown were less likely to be able to wave goodbye, point at things and know one “definite and meaningful word” by the time they turned 1. On the other hand, they were more likely to be able to crawl. But the author of the study, conducted by researchers at the Royal College of Surgeons, says parents shouldn’t be too worried, because, “Babies are resilient and inquisitive by nature”, and are likely to bounce back, given the right support.

Simon Cowell credits his son with saving his life after he became “obsessed” with work. The music mogul, who is behind the “Got Talent” shows and “The X Factor”, said he was “really unhappy” until Eric, his son with fiancée Lauren Silverman, was born 8 years ago, because his life was “99% work”. Cowell says it got to the point where he didn’t enjoy what he was doing and he “was miserable the whole time”, “obsessed with beating the competition” and was “terrified” of burn-out. But now that Eric is around, he says he doesn’t work through the night anymore. Quote: “If he hadn’t come along, God knows what would have happened.”

“Stranger Things” fans can now live out their worst nightmares — the infamous ‘Creel House’ from the show has hit the market. The iconic haunted house, which is home to the Creel family and Vecna’s lair in the Upside Down in Season 4, is now up for grabs in Rome, GA, and it’s listed for $1.5 million. The home was purchased in 2019 for $350k, but it’s been restored to its original form. The main house has 6 bedrooms, and 5 bathrooms, and was originally built in 1882. There’s also a separate guest house in the backyard of the one-acre lot. The estate was once successful bed and breakfast. For the show, they used exterior shots of the home and some of the interior, but the house was also recreated on a sound stage near Atlanta.

Daniel Radcliffe has no plans to replace Hugh Jackman as ‘Wolverine’, no matter what you may have heard. In a new interview with GQ, the “Harry Potter” actor cleared things up, saying: “It’s purely a press tour rumor. I say something, and then occasionally I get bored of answering that way so I say something different, and that sets it off again. I should just never open my mouth.” After being ‘Harry Potter’ for a decade, Radcliffe also said he never wants to do that again. Quote: “I just don’t ever want to get locked into something… that I am not sure I will be able to love the same amount the whole time.”

Cats behave towards humans in the same way that they respond to their feline friends, so the secret of whether your cat feels bonded to you lies in their behavior…

➠ Look out for scenting: Cats have scent glands on their flanks, head and around their ears, and rub their heads against people and objects that are familiar and comforting. That soft sensation you feel against your calves is actually your cat identifying you as a friend — and is a huge compliment.

➠ How they greet you: A tail held in the upright position shows familiarity, trust and affection (the equivalent of a wave). Rolling over and exposing their vulnerable underbelly is another gesture that a cat has ultimate trust in you. The “chirrup” greeting is a melodious sound that cats make when saying hello to preferred individuals. So, if your does that, it is definitely pleased to see you.

➠ Look for blinks: When cats encounter strange humans or cats, they usually greet them with an unblinking stare. But they are more likely to slowly blink at those they have a good relationship with. Slow blinks are associated with a positive emotional state and can be a sign of trust, contentment and affection, like a human smile. Try this: blink and your cat might blink back. It’s a nice way to bond with your cat if they aren’t keen on being touched.

➠ They get up close: Cats are protective of their personal space. If a cat allows you to get close, it suggests a close bond, particularly where the contact is frequent or long lasting. Curling up on your lap is a sign of deep trust. Grooming only happens between cats with a warm relationship, so licking your hand or face can be a show of endearment.

In Svalbard, a remote Norwegian island, it is illegal to die (because bodies are unable to be buried safely due to permafrost).

We feel “hangry” because it’s harder to control emotions when the brain is low on glucose.

Spam email got its name from the canned meat after a Monty Python skit that referred to Spam as tasting “horrible and being ubiquitous and inescapable.”

Question: 19% of us will say THIS to someone this morning. What is it?

Answer: “I love you”

Lawmakers in New Jersey want to ban automakers from charging subscription fees for built-in car features. This comes a few months after BMW sparked outrage when it began charging car owners in the UK, Germany and several other countries $18 per month to turn on their heated seats. Car manufacturers, also including Toyota and GM, are looking to increase recurring revenue by charging customers for access to features that are built into vehicles, and in many cases were included as standard equipment. But a proposed bill in New Jersey would bar manufacturers and dealers from charging subscription fees for features that are already installed in cars. The bill would make exceptions for features that incur ongoing expenses, such as satellite radio, wi-fi, traffic mapping or even Tesla’s “Full Self-Driving” feature.

YOU KNOW YOU’RE A WINO IF:

• You drink wine by the box.

• You think that the opposite of white is red.

• You think that raisins are a waste of a grape.

• You have no fewer than 5 tools to open a bottle at any given time.

• Your glass is always half-empty, not half-full.

• Your man-friend/roommate/dog instinctively refills your glass anytime they go to the kitchen. Without being asked.

• You didn’t know that burgundy was a color.

• You find yourself swirling the glass even if it’s water.

• You wonder why so many people dislike the French.

• You can’t finish lists because you finished the bottle instead.

Everything that used to be a sin is now a disease. - Bill Maher

Women cannot complain about men anymore until they start getting better taste in them. - Bill Maher

If you think you have it tough, read history books. - Bill Maher

This is the worst thing to happen to beaches since the Speedo. - Bill Maher

Iowa Boy Uses Lemonade Stand Money To Do Something Nice For His Entire Kindergarten Class https://www.sunnyskyz.com/good-news/