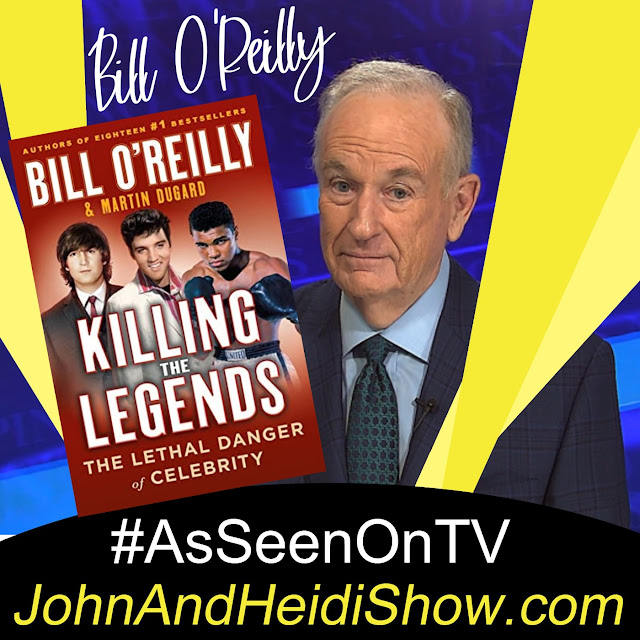 Today we visit with best selling author Bill O'Reilly about his new book Killing the Legends: The Lethal Danger of Celebrity.

Putting together a delicious Christmas dinner for a large, hungry group of loved ones is definitely a skill. And what is the hardest part? According to a poll, the most difficult parts of a Christmas dinner to master are delicious gravy (31%), moist turkey (29%), Yorkshire puddings (28%), and crispy roast potatoes (27%). A survey of 2,000 people also found that 13% struggle with the stuffing. And when it comes to vegetables, sprouts seem to be the most difficult, followed closely by carrots. Nearly a quarter (24%) of hosts struggle to get Christmas dinner timings right, with 32% saying they’ve had to make something again from scratch after messing it up. The average holiday chef prepares for the meal 7 days in advance, and it still takes an average of 5.6 hours on the actual day, to get everything ready.

The biggest-selling Christmas single of all time is Bing Crosby’s “White Christmas” from the soundtrack of the holiday movie classic “Holiday Inn”. More than 30 million copies have been sold. #2 Silent Night by Bing Crosby, #3 All I Want For Christmas Is You by Mariah Carey, #4 Rudolph the Red-Nosed Reindeer by Gene Autry and #5 is Do They Know It's Christmas by Band Aid

After years of development and production, James Cameron’s “Avatar” sequel has had its judgment day. “The Way of Water” took flight at the box office with a solid $53 million gross on opening day Friday, including $17 million in Thursday previews. That’s the 6th-highest first-day domestic gross of the year, following “Doctor Strange in the Multiverse of Madness” ($90.7 million), “Black Panther: Wakanda Forever”, “Thor: Love and Thunder”, “Jurassic World Dominion” and “The Batman”. The bad news is that the blockbuster is unlikely to meet projections for a $150 million-plus opening weekend, instead settling for a now-estimated $135 million launch. Similar drops are being felt in overseas markets. But here’s the good news: people absolutely love the movie. The Rotten Tomatoes audience score for “The Way of Water” is at an excellent 94%.

➠ A report claims that running in marathons can damage to your heart.

➠ The nominees for the Golden Globes were announced last week.

➠ This Month, exports of US crude oil and petroleum products hit 11.8 million barrels per day, an all-time high.

➠ 86-year-old Bette Nash is the world’s oldest flight attendant. When she first started, she was referred to as a “stewardess.”

• In Dr Seuss’ famous story, “How the Grinch Stole Christmas”, what was the name of the Grinch’s dog?

a) Putting up mistletoe. [CORRECT. It was part of “Saturnalia”, the festival honoring Saturn the planter god. The event also initiated the traditions of exchanging gifts, illuminating lights, and closing businesses]

b) Decorating a tree

c) Hanging stockings by the fireplace


• What Christmas food is made from “marsh-whorts”?

Early illustrations of St. Nicholas make him out to be a stern symbol of discipline rather than the jolly, overweight elf that children know today.

Rudolph the Red-Nosed Reindeer was invented in 1938 as a marketing gimmick to get kids to buy holiday coloring books.

An artificial Christmas tree would have to be reused for more than 20 years to be “greener” than buying a fresh-cut tree annually.

Many parts of the Christmas tree can be eaten. Needles are a good source of Vitamin C.

Until a Coca-Cola ad gave him his red and white suit, Santa Claus wore green, purple or blue.

Question: 52% of adults admit that THIS is one of their holiday pet peeves. What is it?

It was the Grinch, not Santa, who came early for a driver who tried to pass off an inflatable figure of the Dr. Seuss character as a passenger. An Arizona state trooper noticed a car in a high-occupancy vehicle lane on Interstate 10 in Phoenix with a “Seusspicious-looking” green character in the passenger seat. While the gag may have caused the officer’s heart to grow, it did not stop the driver from getting cited for being in the HOV lane. The Arizona Department of Public Safety posted a photo of the belted-in Grinch figure, with the driver’s face blurred, on its Twitter account. Officials say they appreciate the “festive flair”, but the driver’s action was still illegal. LINK: https://tinyurl.com/8p5a7zts

➠ Mistaken Lyrics Coasters: This set of cork coasters features famously misheard lyrics, which are bound to make everyone LOL. Examples: “Hit me with your best shark”, “It’s not fair, to deny me, of the cross-eyed bear, that you gave to me.” https://amzn.to/3HL0eaV

➠ Bread-shaped plush Pillow: Available in 3 sizes, this giant plush baguette is sure to give the carb lover in your life sweet dreams. https://amzn.to/3v573fW

➠ Belly Waist Pack: It’s a dadbod-styled fannypack that you wear over your stomach, and it hilariously looks like – well, a dude’s bare belly! https://amzn.to/3ji2Xhz

➠ Sushi Socks: If their go-to takeout order is always sushi, then this set of cotton socks, packaged in a traditional sushi takeout box, will appeal to their taste buds. https://amzn.to/3jbhrzX

➠ My Last Nerve Candle: A classic-looking scented candle, with the label: “My Last Nerve. Oh look…it’s on fire”! If they’re always stressed out, hopefully this will make them laugh (and relax a little!). https://amzn.to/3hH7wSn

➠ Custom Dog Portrait: They treat their furbaby like royalty, and your favorite pet parent will howl with laughter over this custom Renaissance-style pet art, which is available as a digital file, canvas, or poster. https://amzn.to/3Gf513j

➠ “I Pooped” Bathroom Guest Book: We all do (-do) it. So why not gift your friend this housewarming present to spruce up their new bathroom?  https://amzn.to/3hEtk0R

The Supreme Court has ruled that they cannot have a nativity scene in Washington, D.C. This wasn’t for any religious reasons. They couldn’t find three wise men and a virgin. - Jay Leno