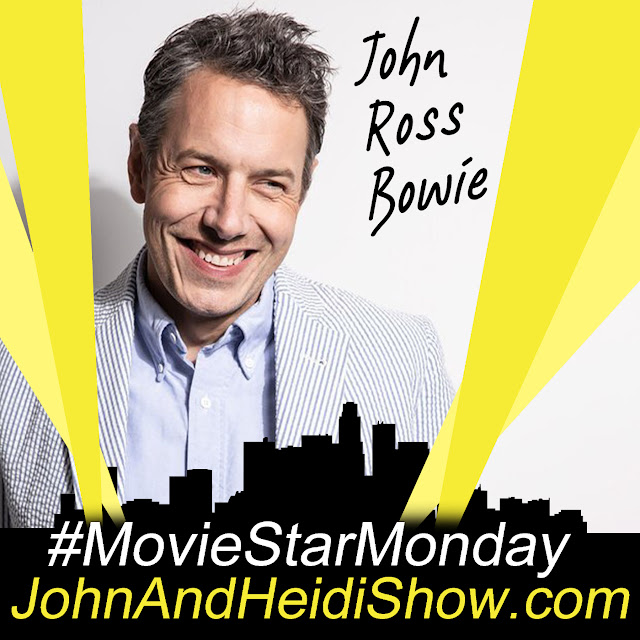 This #MovieStarMonday we visit with John Ross Bowie (Reno 911, Big Bang Theory, Glee & more) We will talk about his new book "No Job for a Man" https://amzn.to/3keHqXN

Sure, it’s true that what and how much you eat plays a major role in your health. But scientists say that WHEN you eat can make a difference as well. Studies show that for optimal health, it’s best to consume most of your calories earlier in the day rather than later — for example by eating a large breakfast, a modest lunch, and a small dinner. Because of the way our internal clocks operate, our bodies better digest and metabolize food early in the day. As the day progresses, our metabolism becomes less efficient. Studies show that a meal consumed at 9am can have vastly different metabolic effects than the same meal consumed at 9pm. A new study published in Obesity Reviews found that people who were assigned diets where they consumed most of their calories earlier in the day lost more weight than people who did the reverse. They also showed greater improvements in blood sugar, cholesterol levels and insulin sensitivity, a marker of diabetes risk.

A Japanese company has introduced a line of hospital gowns that are not only comfortable – but also stylish. Lifte, a joint venture between a medical supply company and a hospital clothing service, claims that dressing well an important way to relieve stress as a patient. Not only are Lifte gowns designed with fashion in mind, but they are also made from a special fabric that maintains its softness, making the clothes more comfortable to wear. Lifte gowns come in 2 types – classic and bathrobe – and 4 colors: pink rice, dusk blue, gray, and wine red. LINK: https://tinyurl.com/yc38jjbt

Jane Fonda was joined by her “80 for Brady” co-stars Lily Tomlin, Rita Moreno and Sally Field at the 2023 Palm Springs International Film Festival. The quartet screened their new film, in which they portray a group of BFFs who travel to the 2017 Super Bowl in order to meet the then-quarterback of the New England Patriots. Fonda says she was “completely starstruck” when she met Tom Brady. She that that although he was “kind and humble”, she said” “My knees actually got weak when he walked into my trailer…When somebody is the best in the world at what they do, you have to honor that and respect it. I was just awestruck.”

And because you need to know this, Jordan Peele says he bought Corey Feldman’s prosthetic ear from the 1986 film “Stand by Me.” During an appearance on “Late Night with Seth Meyers”, Peele revealed that he won the ear during an auction that Feldman staged around his 50th birthday. He told Meyers: “In saying it out loud, I realize how creepy it was. That’s not the thing you should share.” When Peele later told Feldman that he was in possession of his character ‘Teddy’s’ ear, Feldman responded: “Man, I’m so glad it was you.”

While many people shop online to find a white noise machine, which can cost more than $100, they might be interested to know that there’s a good chance they already own one – and it’s right at their fingertips. iPhones running on iOS 15 or later have a white noise feature built-in, so long as it’s an iPhone 6S or later (iPhone 6S models were first available in 2015, so any recent iPhone has this feature). The setting is not labeled as “white noise,” but is instead called “background sounds”. To get to the feature, go to Settings > Accessibility > Audio/Visual > Background Sounds. The user can choose from a range of sounds: rain, stream, ocean, balanced noise, bright noise and dark noise.

Tom Cruise writes with his right hand, but does almost everything else with his left hand.

In a room with just 23 people, there’s a 50% chance that at least 2 share the same birthday.

The world seems quieter right after a snowfall because the blanket of fresh powder absorbs sound, making things seem “calmer.”

Women have a slightly higher average IQ than men.

Until 1997, “The Joy of Cooking” included recipes for armadillo and stuffed boar’s head.

Applying hemorrhoid cream to your chest and waist can make you appear more muscular.

Question: A survey found that 20% of us start doing THIS in January. What is it?

Customers at a Dunkin’ Donuts near Boston were surprised to see Ben Affleck handing out their orders on Tuesday. One customer snapped a photo of the Oscar winner as he served up her iced coffee at the drive-through window, telling a local NBC reporter that the Batman star was “incredibly funny and quick-witted.” She also said that film crew members on site told her they were making an ad – some have speculated that it’s for the Super Bowl, Feb. 12.

• If you eat something but no one else sees you eat it, it has no calories.

• Movie-related foods do not have additional calories because they are part of the entire entertainment package.

• Foods that have the same color have the same number of calories. (Spinach and pistachio ice cream, cauliflower and whipped cream.)

• Things licked off knives and spoons have no calories if you are in the process of cooking.

• Chocolate is a universal substitute, and may be used for any other food.

You know you’re getting old when you stoop to tie your shoelaces and wonder what else you could do while you’re down there. - George Burns