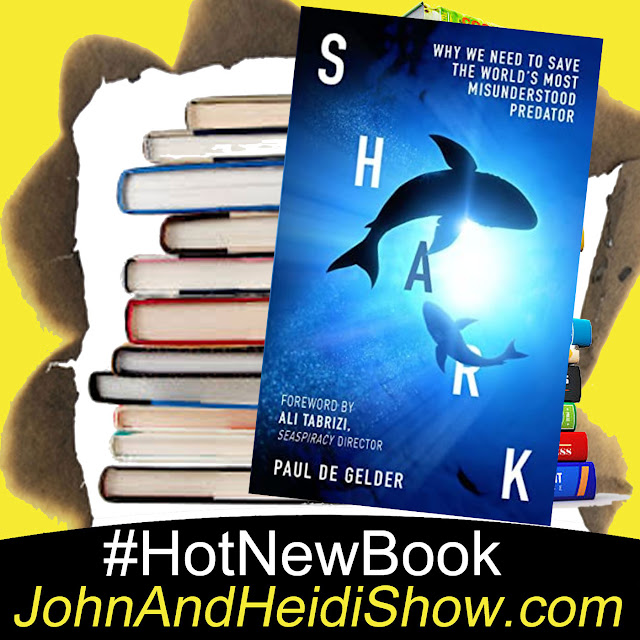 Today we visit with best selling author Paul De Gelder about his new book “Shark: Why we need to save the world’s most misunderstood predator.” AVAILABLE NOW: https://amzn.to/3kmCIaz

Homeowners are setting 2023 resolutions to improve their homes. Here are some highlights from a newly released homeowner report from Hippo, the home insurance group focused on proactive home care. 2022 was a difficult year for homeowners: 68% of homeowners said that home ownership has been difficult over the past year. Many homeowners said that inflation caused them to delay home upgrades (62%), repairs (60%) and maintenance (64%) in 2022. Homeowners are dissatisfied with their home care efforts this year (67%) often experience anxiety and/or dread about things that could go wrong in their home (65%). Deferred maintenance and upgrades over the past year are causing homeowners to set resolutions for 2023: 36% of homeowners said home upgrades have become more important to them over the last 12 months. Homeowners are budgeting $11,173 on average for home repairs and upgrades in 2023.

Transparent wood could soon replace plastics for see-through packaging and biomedical tools. The new renewable and biodegradable material could reduce the strain on the environment and reduce fuel bills because it is 5 times more efficient than glass. Around 400 million tons of plastic waste is produced across the globe each year, with single-use plastic increasingly the culprit. Transparent wood is emerging as one of the most promising future substitutes. The wood was created in 1992 by German scientist Seigfried Fink, who removed the lignin content in wood and traded it for transparent materials.

Jennifer Lawrence still has a few celebs she’s left starstruck by. In a new W Magazine article, she says: “To me, the biggest celebrities in the world are, like, Pete Davidson. Or when Ariana Grande was in my last film, ‘Don’t Look Up’, I was photographed with her and I fully look like a radio contest winner.” But there’s one other actress that would simply take her breath away. Quote: “I would be starstruck if I saw Jessica Simpson. That would knock me over.” The 32-year-old also shared that while growing up, she had posters of Avril Lavigne up in her room. “And a poster of dogs.”

Nominations were just unveiled for the 29th annual SAG Awards. The dark comedy “The Banshees of Inisherin” and genre-smashing sci-fi film “Everything Everywhere All at Once” both scored big, with 5 nominations each. Both are up for outstanding cast in a motion picture – the equivalent of the Academy Awards’ best picture. Also up for the guild’s top prize are “Fabelmans,” ensemble drama “Women Talking” and Hollywood epic “Babylon.” The SAG Awards take place Feb. 26 and will stream live on Netflix’s YouTube Channel.

Pamela Anderson is taking her power back. In the official trailer for her upcoming Netflix documentary, “Pamela, a love story”, she says she felt “sick” when she was recently forced to relive the trauma of her 1996 sex tape scandal with ex-husband Tommy Lee. She doesn’t go into detail about when and why, but as you know, last February, Hulu put out the miniseries “Pam & Tommy”, which became a smash success. A month later, Netflix announced Anderson’s doc was in the works, and as she puts it: “I want to take control of the narrative for the first time.” “Pamela, a love story” premieres Jan. 31 on Netflix. LINK: https://tinyurl.com/3ckmp28f

We all know that rotten feeling. One minute you’re enjoying a lazy afternoon doing approximately nothing…and the next you’re hit with that uneasy feeling in the pit of your stomach, and an increasing sense of dread as the hours tick away – because Monday is coming. It’s called the “Sunday Scaries”, and when you consider that more than a quarter of us have a harder time falling asleep on Sunday nights, and 73% of workers regularly lose out on rest due to worrisome thoughts about their job, there must be something we can do about it, right? Taijah Bell, a Georgia-based therapist, says you should “Ask yourself about what are some intentional things you can put in place on a Monday morning that will set the tone for your week…maybe having an extra hour in the morning…to stop and get your favorite breakfast, maybe journaling in the morning, whatever self-care activities look like for you.” Social worker and owner of Transformation Counseling Services Pia Johnson believes that aside from self-care and setting positive intentions for the upcoming week, “It is essential to re-evaluate your job. (The Sunday Scaries) may be a clear sign that this is not the right job, role, or company for you.” If you find that you have done all you can and the symptoms do not become more manageable, she suggests “seeking out a therapist that can assist you on your journey.”

✓ Forgiveness is the number one trait linked to happiness in humans.

✓ The Ancient Romans dropped a piece of toast into their wine for good health – that’s why we now “raise a toast”.

✓ The international dialing code for Russia is 007.

✓ Those competing in Wimbledon are not allowed to swear. Because of this, line judges must learn curse words in every language.

✓ Police in Belfast, Northern Ireland, once used music from an ice-cream truck to calm angry teen rioters. It diffused a tense situation, but the officers were reprimanded for it.

Question: In a survey, nearly half of people said they never experienced THIS as a child. What is it?

A Pennsylvania man held a pizza delivery driver hostage because he didn’t have his drink. 42-year-old Leo Lamont Toney of Johnstown, ordered a pizza from Primo’s Pizza. The driver told police that when he began to walk away from the customer’s apartment, Toney asked where his soda was. When the found the delivery driver didn’t have the drink, Toney allegedly pulled the man inside and locked the door. The delivery man said he managed to escape by pushing Toney, fled the scene and called police. When cops arrived, they noticed the accused smelled of alcohol and had slurred speech. He was charged with false imprisonment. It’s unknown if Toney actually ordered a beverage.

Every year, some passengers take a mental vacation, and try to board airplanes with dangerous, illegal and downright ridiculous objects. In honor of these mile-high morons, the TSA has unveiled a video listing the most ridiculous things they confiscated last year. Here are “The TSA’s Top 10 Catches of 2022: (PART 1)

2. A gun inside a raw chicken: Someone tried to smuggle a plastic-wrapped handgun inside a whole uncooked chicken. The fire-y poultry seasoning was pecked up by officials at Fort Lauderdale-Hollywood International Airport.

3. Peanut butter firearm: A traveler was busted at New York’s JFK for trying to smuggle a disassembled .22-caliber semi-automatic handgun through security in 2 jars of Jif.

4. A gun in an arm-sling: A sling-wearing passenger at Greater Rochester International Airport explained he couldn’t remove his cast, because it was heavy due to having metal in it. He wasn’t lying.

5. A knife in a laptop: A passenger was busted with a knife hidden deep within the bowels of his laptop at Virginia’s Richmond International Airport. (Cutting-edge technology?)

Before you judge a man, walk a mile in his shoes. After that who cares?… He’s a mile away and you’ve got his shoes! - Billy Connolly

A World War II vet has celebrated his 108th birthday surrounded by more than 160 cards from complete strangers following an appeal from a nursing home. Donald Rose said he’s overwhelmed by the kindness of well-wishers after people from across the UK sent him a greeting card to mark his milestone…including one from King Charles III. The Royal British Legion launched an appeal on Facebook to encourage people to send the widower a card to celebrate the occasion, plus his achievements during the war. Rose, a former sniper and Desert Rat who also served with the Queen’s Royal Regiment, was awarded a number of medals during his service.