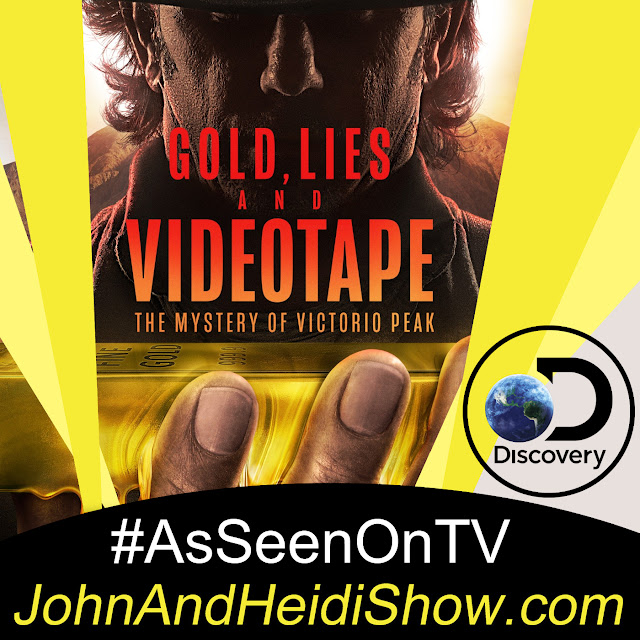 Today we visit with Terry Delonas and Alex Alonso about their new TV series “Gold Lies and Videotape” on Discovery Channel and Discovery+.

If you weren’t too impressed with having to get up early and brave the elements – and the traffic – in order to get to work this morning, just consider this: It’s good for you. Researchers at University College London report that traveling more than 15 miles (24km) from home regularly is positive for your mental and physical well-being. The team found living in a poorly-connected area had a negative impact on health, particularly for those over the age of 55. Older adults are more likely to suffer mobility issues and loneliness, while younger people often move to the big cities. People who travel often were more likely to visit more places and to catch up with friends and family on a regular basis, leading to more social participation and better health. The researchers say their findings show society needs to invest more in medium and long-distance transport options.

María Branyas Morera of Spain, who was verified as being the oldest living person at 115 years and 326 days old, is an active Twitter user, according to Guinness World Records. The spry senior’s Twitter bio reads, “I am old, very old, but not an idiot,” and she frequently shares her words of wisdom on the social media platform with the help of her daughter. LINK: https://tinyurl.com/m2as572u

It’s now official: James Cameron’s “Avatar: The Way of Water” has become the 6th movie ever to cross the $2B mark worldwide. It is also the filmmaker’s third to hit the milestone, alongside “Titanic” and the original “Avatar”. Global gross for the 20th Century Studios/Disney sequel hit $2.024B through Sunday. In its 6th weekend of release, “Avatar: The Way of Water” continued to float atop the box office, ahead of new release “Missing.” The “Avatar” sequel added $4.6 million to its domestic haul on Friday, pushing its North America total to $582 million, just a stone’s throw away from taking down “Incredibles 2” ($608 million) as the 12th-highest grossing film of all time domestically.

“Avatar: The Way of Water” is now the highest grossing film of the post-shutdown era, with $1.92 billion at the global box office, passing “Spider-Man: No Way Home” for #6 all-time. The next big milestone for “Avatar 2” will be the $2 billion mark, which it is just $78 million away from reaching. When it gets there, it’ll join the first “Avatar,” “Star Wars: The Force Awakens,” “Titanic,” “Avengers: Infinity War” and “Avengers: Endgame” on the exclusive list of films to reach that mark, with James Cameron being director of 3 of them.

The ‘Mother of Dragons’ can’t bring herself to watch “House of the Dragon”. Emilia Clarke, who starred as ‘Daenerys Targaryen’ on all 8 seasons of “Game of Thrones”, hasn’t been able to get her eyes on its prequel series “House of the Dragon”, which premiered in August. Why not? She compares it to being invited to a school reunion “that’s not your year? Want to go to that school reunion? That’s how it feels.” House of the Dragon took home the Golden Globe for Best TV Series – Drama on Jan. 10.

Forget Olivia, Emma, Liam and Noah. Here are the “up and coming” most popular baby names for 2023, according to parenting website Nameberry…

The most popular baby names from 100 years ago, according to US Social Security Administration…

✓ Your brain uses about 20% of your oxygen and caloric intake.

✓ The muscles that control your eyes contract about 100,000 times a day.

✓ You’re more likely to have weirder, scarier and sexier dreams when sleeping on your stomach.

✓ The founder of Match.com lost his girlfriend to a man she met on the internet.

Question: More than half of workers polled said they wish their workplace would upgrade THIS. What is it?

Buzz Aldrin celebrated his 93rd birthday on Friday by getting married. The legendary astronaut posted a statement on Twitter saying: “On my 93rd birthday & the day I will also be honored by Living Legends of Aviation I am pleased to announce that my longtime love Dr. Anca Faur & I have tied the knot.” The second man to set foot on the moon wore a black suit decorated with various pins, while his 63-year-old bride wore a white gown adorned with rhinestones. Aldrin wrote that the couple were “as excited as eloping teenagers.” LINK: https://tinyurl.com/yuj7e4v9

• 1 millionth of a mouthwash = 1 Microscope.

• Time between slipping on a peel and smacking the pavement = 1 Bananosecond.

• Half of a large intestine = 1 Semicolon.

North Carolina nurse Kierstin Davis is sharing the story of how she adopted a 63-pound white puppy after he’d experienced 14 failed adoptions in just 5 weeks. Davis said she knew she had to act fast after a post looking for Ronald’s 15th home by the SPCA of Wake County went viral. As for why the energetic dog kept getting returned, an SPCA spokesperson said: “It was all just a…combination of being really playful and kind of clumsy and goofy and still working on his manners, in combination with his large size.” But after hooking up with the Davis family on Jan. 12, “Everything’s been really good…He really just fits in perfectly”, said Davis, who has two young boys, 4 and 7, along with a rescued Australian shepherd. She agreed to a 5-week trial, and brought Ronald home, surprising her kids with their latest family member. When the kids “just screamed with excitement”, she knew: “Oh, he’s perfect. He’s staying.” LINK: https://tinyurl.com/579vdb2u