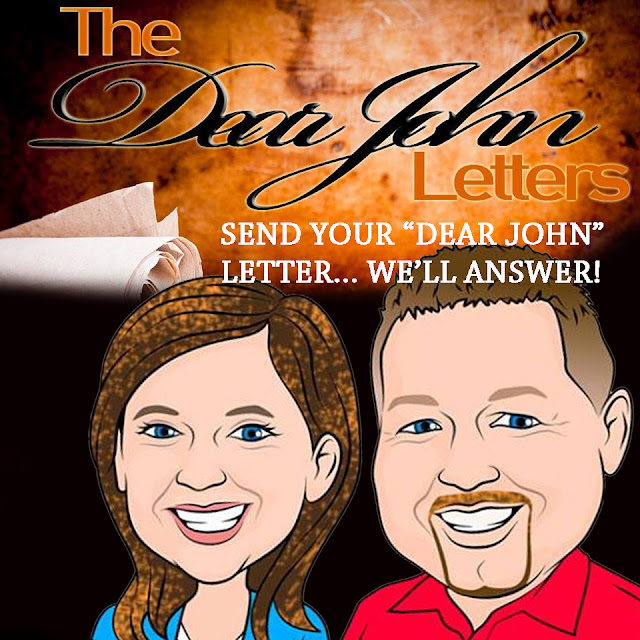 
I'm 40 and single. I've tried dating websites and never had much luck, so last Christmas I decided to change my profile. I typed up what I think women want and hyped up my personal info. Then I used a photo that is 10 years old. Now I have several women that are talking with me online, which has been fun, but I have one that wants to meet up in person and I'm afraid to meet her. The photo is a photo of me, but it was when I was about 30. The stuff I typed is not really me, but with this lady I have connected pretty well. I have been my true-self to her and we have made a connection. Do I tell her the truth before we meet? Do I close the account and move on?


We will answer THIS Dear John Letter on today's show.... and we can answer YOUR letter NEXT week! Simply send a message to the John And Heidi Show facebook page or email it through our web form at JohnAndHeidiShow.com. Whether we use it on the air or not, EVERY Dear John Letter will be answered. We will offer you our advice and we promise to keep your identity 100% anonymous. #DearJohnLetters
TODAY IS A SPECIAL DAY!!! (A special thank you to NationalDayCalendar.com)

A Fox News Poll shows that support for legalizing marijuana is the highest it’s ever been.  (https://goo.gl/2gbuX5)

A Florida woman who was arrested last month on drug possession charges blamed the cocaine found in her purse on the wind. 26-year-old Kennecia Posey was one of two passengers in a car that was swerving in the roadway when it was stopped by Fort Pierce police. According to the police report, an officer approached the car and smelled an odor of marijuana coming from inside. During a search of the car, the officer found cocaine and marijuana in separate bags inside a purse that Posey had on her lap. When questioned about the drugs, Posey admitted that the marijuana was hers. The cocaine was a different story. Posey said, “I don't know anything about any cocaine,” and added “It's a windy day. It must have flown through the window and into my purse.” Posey was booked into the county jail on one felony count of cocaine possession and a misdemeanor count of marijuana possession. (https://goo.gl/hLixtx)

BIG SCREEN-LITTLE SCREEN:
Brought to you by ChannelSurferTV.com... TV with a LOWER monthly fee!
Beyonce reunited with Destiny’s Child at Coachella
(https://goo.gl/b3NvkQ)

Carrie Underwood made a triumphant return to performing at the Academy Of Country Music Awards Sunday. Her operation required her to get 40 stitches in her face. (https://goo.gl/vNa7fz)

Amy Schumer’s new movie “I Feel Pretty” is being criticized online for being “fat-phobic.” (https://goo.gl/29wVKs)

SCOOP OF THE DAY:
Brought To You By FirstCupIsFree.com (be happy... try it free)
An editor of Cosmopolitan Magazine says dating apps are ruining people’s sex lives because they no longer stay with people long enough to develop chemistry.
(https://goo.gl/54qzQw)

A Florida man claims he lost 20 pounds by eating nothing but Chipotle.
(https://goo.gl/5SZDVs)

A Pew Research survey found that the percentage of adults who live at home with their parents is at a 75 year high.
(https://goo.gl/TK4Q2a)

A new survey found the Chik Fil A has surpassed McDonalds as the most popular fast food choice with teenagers.
(https://goo.gl/Zdv8pH)

An NYPD cop was busted on disability fraud after he was caught working as a bouncer in a strip club.
(https://goo.gl/Hhr8GR)

A Connecticut man who was arrested for robbing a bank says he did it to impress Taylor Swift.
(https://goo.gl/YUS9N9)

A male bank robber in Brazil was toting a purse, wearing a wig and sporting a pretty blue dress. He got away with a few hundred bucks.
FUN FACT FOR YOU: Brought To You By LearnWithoutLoans.com Share this with your friends... they'll think you're really smart!
A kiss stimulates 29 muscles and chemicals that cause relaxation. Women seem to like light and frequent kisses while men like them more strenuous.

Our eyes are always the same size from birth, but our nose and ears never stop growing.

WEIRD NEWS:
Brought To You By 49ByDesign.com (websites $49/mo with no set up fee)
Fans of the galaxy far, far away will now have a chance to experience life in space firsthand, thanks to the first-ever luxury "space hotel." For a mere $9.5 million, that is. At the Space 2.0 summit in San Jose, the company Orion Span debuted the Aurora space station, dubbed the first "luxury hotel" in space. It holds six people at a time, including two crew members, and takes guests on 12-day-long trips. The station will travel 200 miles into space circling Earth every 90 minutes-- that means 16 sunrises and sunsets every day. The company is now taking fully refundable deposits of $80,000 per person for trips beginning in 2022. The payment covers an expedited three month training period, partially online and partially at the company's training facility in Houston, to ready the guests for life in space.
Activities and amenities include:
"This is an exciting frontier and Orion Span is proud to pave the way," said Orion Span CEO and founder Frank Bunger in a press release. Orion Span also conducts space research and is developing space condos.

MOMENT OF DUH:By LearnWithoutLoans.com (Find Funding For College)
55-year-old John Bradley Kane was arrested for insurance fraud after detectives said he lied about a Hooters sign falling on his foot. Back in November, Kane retained an attorney to file an insurance claim against Hooters' insurer, Liberty Mutual, after he claimed he was struck in the foot by an “o” from a Hooters sign that had blown off the wall during Hurricane Irma. But according to the manager, Kane and some friends entered the store with the fallen sign and asked for food and drinks in exchange for the stolen “o.” When employees did not cave to their demands, they left the store with the sign. The manager showed detectives surveillance video that shows the sign fall onto the sidewalk without hitting anyone. The “o” remained in the same spot until a man identified as Kane picked it up and moved it to the rear door of the restaurant. After it was determined he lied about the incident, detectives arrested Kane for insurance fraud less than $20,000. (https://goo.gl/GCKSd6)