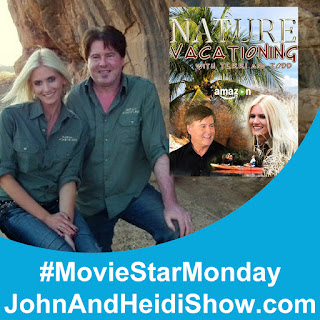 It's a #MovieStarMonday with Todd Magnuson from Nature Adventures, The Two Bit Game Show... and their latest show Nature Vacationing... AVAILABLE NOW AT AMAZON - https://amzn.to/2NVIIBl

A study published in the annals of internal medicine found that most people believe that smoking marijuana has health benefits despite the lack of scientific evidence. (https://goo.gl/enRZsW)


According to a police report from the Martin County, Florida Sheriff’s Office, a Target manager called cops last Tuesday after seeing a shopper, later identified as Geoffrey Ian Mckelvey, doing bizarre things at the store. The 53-year-old reportedly got into an argument with a fellow customer and then dropped his pants and told the person to kiss his naked behind. Mckelvey also behaved in a rambunctious way while walking around the aisles, at one point knocking over contents on a shelf. When deputies showed up at Target, the suspect was no longer there. A man fitting his description was found at a nearby house, about a mile away. A search of the home revealed drugs, including marijuana and eleven pipes with traces of THC, the chemical compound in cannabis. He admitted the drugs belonged to him and that they were “blessed by God.” The suspect was arrested and booked on charges including exposure of sexual organs, possession of less than 20 grams of marijuana, and possession of drug paraphernalia. (https://goo.gl/VTawcQ)
SCOOP OF THE DAY:
Brought To You By 80sInTheSand.com (Join John & Heidi for a FUN WEEK!)

The National Traffic and Safety Board is warning teenagers against the dangers of the “In MY Feelings Challenge,” which requires them to throw themselves out of a moving car to emulate a Drake video. (https://goo.gl/yvr6Aw)

A survey by the Migration Policy Institute found that 22% of the U.S. population does not speak english (https://goo.gl/89GBQG)

A survey by the United Nations found that HIV infects one person every three minutes. (https://goo.gl/PorvF6)

A 21-year-old crypto-currency tycoon in Great Britain is on pace to become the world’s first trillionaire.
(https://goo.gl/5G8XoA)

A guy in Germany thought the roof of his house would be a good place to take a nap. About 20 minutes into his snooze he rolled off the roof and landed… on a couch that had been placed on the front lawn for someone who was coming to pick it up. The couch claimer was actually late, which probably saved the roof snoozer’s life.

Noun:
-The principal, power, or agency by which events are predetermined; fate, destiny.
-The web of cause-and-effect that permeates the universe. The Germanic/North European equivalent of karma. (Urban Dictionary)

Used in a sentence:
"We all have our own wyrd to contend with in life."

WEIRD NEWS:
Brought To You By 49ByDesign.com (websites $49/mo with no set up fee)
A 19-year-old was arrested after the blow-up doll he had allegedly tied helium balloons to interrupted flight paths above Canada. The man could face charges for the incident at Vancouver Harbour as police revealed it was an apparent stunt that he was filming. West Vancouver police said two men were filming a video when the sex toy drifted into the sky at Ambleside Beach. It was described as “an adult-sized and shaped inflatable” with 10 large helium balloons attached to it.
Officers said in a statement, “The officer believed release of the inflatables posed a hazard to aircraft entering or leaving the harbour area.” The apparent prank affected air travel in the area as Transport Canada and the Civil Aviation Branch had to send a warning out to pilots. (https://goo.gl/Gr6sYo)

MOMENT OF DUH:By LearnWithoutLoans.com (Find Funding For College)
Police said a 37-year-old Anchorage man was charged with assault after he bit a cab driver late Thursday and then attacked him with bolt cutters in a gas station parking lot. The driver called police about 11:30 p.m. to report the assault. The driver said he had been bitten in the arm and struck in the face with bolt cutters. As officers were talking to the driver, employees from the Peanut Farm across the street called 9-1-1. A man had just run into the restaurant with bolt cutters and was hiding in the restroom. A team of officers and police dogs went over and the man ran out of the restroom and through the restaurant, ignoring officers' calls to stop. He ran into the restaurant kitchen, crashed into a wall, and fell down. At that point officers handcuffed the man, identified as Justin Saunders. Police took Saunders to the hospital to check for head injuries from striking the wall and then took him to jail.
(https://goo.gl/5H3Lrp)