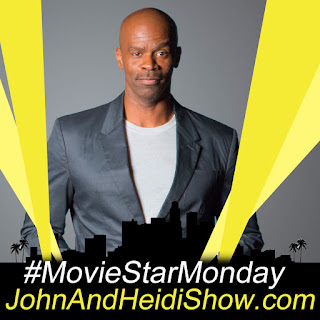 It's a #MovieStarMonday with Michael Jr. (War Room) We'll talk about his comedy PLUS hos special event NEXT THURSDAY all over the nation. MORE THAN FUNNY will be on the big screen on Thursday, October 18th. www.MoreThanFunnyMovie.com

"The achievement of one goal should be the starting point of another." --Alexander Graham Bell

Brought to you by TimeForRehab.com! Each day we talk about people doing dumb things under the influence, but addiction is no laughing matter… if you or someone you know needs help, you can learn more at TimeForRehab.com.
A Florida man is facing charges after deputies say he tried to outsmart a urine test. According to an arrest report, 36-year-old Charles Bickford showed up at a probation office in Hudson on Thursday for court-mandated color-code urinalysis testing. Inside, he met with the probation officer who has supervised him for the past seven months. During the urine test, the officer noticed Bickford had attached a clear plastic squirt bottle to his genitals using a rubber band. Deputies say it was “a willful attempt to defraud the validity of the lawfully administered urine drug screening.” An arrest report called it a violation of a condition of his active felony drug offender probation. His probation officer told him to stay in the testing lab so he could get help from another officer. Deputies say Bickford refused and pushed his officer so he could escape the lab. According to an arrest report, he then tried to push past a second probation officer in the hallway. He is now facing charges for battery on a probation officer and resisting arrest with violence.  (https://goo.gl/KUFXQ5)

A tractor trailer full of cows overturned on a Georgia Highway and caused long delays Tuesday. It’s unclear what caused the accident, 89 Cows were immediately recovered but 70 escaped. (https://goo.gl/a9XARY)

A former New York City Principal who was fired after authorities found x-rated selfies on her computer has settled with the Department of Education for $210,000.
(https://goo.gl/tHZ6mZ)

A video of Mick Jagger dancing his face off at a party in Paris has gone viral. (https://goo.gl/roSS41)

NETFLIX is going to allow users to choose how a story will end when they’re streaming a show. (https://goo.gl/nAchKW)

Ancient Greeks came up with the idea of cyclops after they found a fossil of a mammoth, and had no idea what it was.

Quanked (KWAYNK'd)
Adjective:
-Overpowered by fatigue.
-To have the strength reduced or exhausted, as by labor or exertion; become fatigued; be sleepy.

Used in a sentence:
“After sprunting all weekend, then frooncing to get my chores done, I’m well quanked.”

Quanked is a condition in which one's energy and vitality has been consumed. One who is quanked has used up his or her bodily or mental resources, usually because of arduous or long-sustained effort. To feel quanked at the end of the day; quanked after a hard run; feeling rather quanked; quanked by a long vigil.

WEIRD NEWS:A Kansas McDonald’s worker has been charged with one count of

MOMENT OF DUH:While dining Saturday at a Florida café, Pedgie Georges thought it would be funny to send her boyfriend a text falsely claiming that “people were robbing the restaurant.” But what the 22-year-old woman did not anticipate when planning her “prank” was that her beau would call 9-1-1 to report that an armed robbery was in progress at Alabon Bakery, a Fort Pierce eatery specializing in Haitian cooking. After receiving the 9-1-1 call, cops raced to the restaurant, running red lights with their sirens blaring. With their weapons drawn, officers subsequently entered the business and discovered no crime in progress. But they did find Georges, who explained that she texted her boyfriend “as a prank that people were robbing the restaurant.” Since she had “created a dangerous environment” that could have resulted in harm to police or members of the public, Georges was arrested for misuse of the 9-1-1 system.(https://goo.gl/uRWR3q)