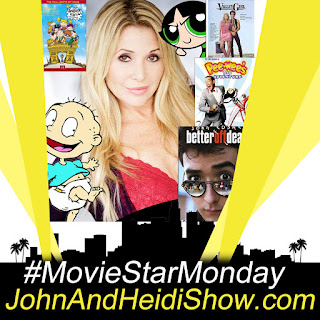 It's another #MovieStarMonday we talk with E.G. Dailey!
Check out her NEW VIDEO "So Pretty" - https://zurl.co/7w30

"Diligence is the mother of good luck." --Benjamin Franklin

Brought to you by TimeForRehab.com! Each day we talk about people doing dumb things under the influence, but addiction is no laughing matter… if you or someone you know needs help, you can learn more at TimeForRehab.com.
Matthew Caskey, a UPS driver from Louisville, Kentucky, was charged with DUI and careless driving on Monday after a local middle school employee reported him to police. The unidentified worker from Middletown Elementary School called the cops after Caskey arrived at the building reeking of alcohol. Caskey left the school before cops arrived, but minutes later they spotted him speeding down a nearby road, nearly hitting a raised curb. According to an arrest report, during the traffic stop for reckless driving, Caskey admitted to drinking “half a pint of whiskey.” Cops said he looked “tired and red” and also slurred his speech. Caskey refused to take a field sobriety test, but later submitted to a Breathalyzer, which determined he had a .316 blood-alcohol level. He had a small bottle of the whiskey Fireball in his pocket, a partially full bottle of Early Times, and some empty bottles of alcohol in his lunch box. (https://goo.gl/zmCPZZ)

Used in a sentence:
“Don’t go rubbing lamps or opening bottles at the bazaar, you may inadvertently release a not so discreet afreet”

The Grandiloquent Word of the Day Calendars are now available for pre-orders! https://gwotd-2019-calendars.backerkit.com/hosted_preorders

WEIRD NEWS:We’re learning more information about the woman at the center of a string of robberies across metro Detroit taking place over just a matter of hours. It quite literally was like something out of a movie - a serial bank robber hitting five banks back to back - a series of bank heists maybe seen back in the day, but unusual for the modern era. Police say that the woman behind the serial bank robberies is Dajanae Jordan. Police released pictures of the serial robber, each time going into the bank with her face covered and giving the teller a note demanding cash. After investigating and reviewing security video, police were able to identify the vehicle seen during the robberies and tracked it down to an apartment in Sterling Heights where Dajanae lived. Officers then took her into custody. Police say Dajanae only managed to get away with a few thousand dollars from all those robberies. (https://goo.gl/sPeJe2)

MOMENT OF DUH:Brought to you by FunkyMonkeyShirts.com (funny shirts & more)

A Wyoming man is facing a domestic battery charge after allegedly striking his girlfriend with a scalding Hot Pockets sandwich that left the victim with burns on her neck and ear. Responding to a 9-1-1 call reporting an assault, Casper cops early Sunday morning spoke with a woman who said her friend had been injured by a Hot Pockets thrown by 29-year-old Levi Lucero. The witness told police that skin on the 28-year-old victim’s face was “blistering and falling off.” Responding officers noted that the victim--who was being loaded into an ambulance--appeared to have suffered burns on her neck and ear. They added that the woman had “Hot Pocket shrapnel all over her neck and shirt.” Lucero and the victim are parents of a two-year-old boy and have been together for six years. During police questioning, Lucero acknowledged arguing with the victim, but denied that their dispute turned violent. But when asked about the woman’s injuries, Lucero reportedly replied, “I did not mean to burn her.” (https://goo.gl/mDbKE1)