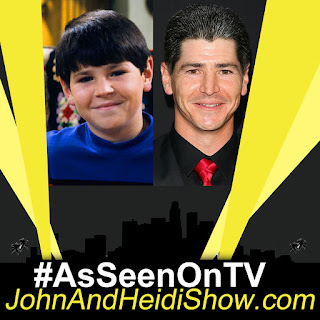 Today we visit with actor Michael Fishman (DJ Connor from Rosanne & The Connors) about their new show and his other projects. https://abc.go.com/shows/the-conners/episode-guide

"I have found the paradox, that if you love until it hurts, there can be no more hurt, only more love." --Mother Teresa

IS IT A GOLF COURSE... OR IS IT A REHAB CENTER!
Brought to you by TimeForRehab.com
I'm going to give you the name of a REAL place...I want you to tell me if it houses a GOLF COURSE or a REHAB CENTER!
Pine Heights in Baltimore, Maryland ….. REHAB

BRAIN ON DRUGS:
Brought to you by TimeForRehab.com! Each day we talk about people doing dumb things under the influence, but addiction is no laughing matter… if you or someone you know needs help, there is help. You can learn more at TimeForRehab.com.
Three people were arrested Saturday on multiple charges after a shoplifting attempt at an Anchorage Walmart reportedly turned into a robbery. The store’s loss prevention told police a woman had pointed a handgun at three employees after they confronted her about merchandise hidden in her purse. The thief reportedly left the store in a white SUV driven by someone else. Officers located the SUV a few blocks away in the parking lot of the Chuck E. Cheese’s. The vehicle was unoccupied except for a puppy, which was later placed in the care of Animal Control. A witness told officers the occupants had gone into the Chuck E. Cheese’s restrooms. When officers searched the restrooms, they found a handgun inside a sanitary napkin disposal bin, a syringe containing heroin, and tags that had been removed from the stolen Walmart merchandise. 38-year-old Tacie P. Chaison was also found in the upstairs bathroom and matched the description of the suspect in the Walmart robbery. She was arrested on an outstanding warrant and is now facing new charges including robbery.
(https://bit.ly/2UB2iXS)
BIG SCREEN-LITTLE SCREEN:

Aquaman brought in $250 million GLOBALLY in its debut at the Box Office.
(https://bit.ly/2QxJTNg)

Pete Davidson performed on “Saturday Night Live” after writing a dark Instagram note that lead some people to believe he has mental health issues.
(https://pge.sx/2SanyCp)

KFC is selling a fried chicken scented fire log that will fill your home with the smell of their classic recipe. (https://www.kfc.com/fire-log)

A survey by Graphic Springs found that 19% of people would prefer Santa Claus to be gender neutral. (https://nyp.st/2A4Abrl)

A Bloomberg survey found that 33% of Americans expect the economy to get worse next year. (https://bit.ly/2A4zUVl)

A Florida school teacher has been fired after trying to kiss a 13-year-old male student. (https://nyp.st/2S7jPFF)

A growing number of companies are switching to a four-day work week because giving workers more time off boosts productivity. (https://reut.rs/2CjtvqX)

FUN FACT FOR YOU:
Share this with your friends... they'll think you're really smart!
A bridge for squirrels exists
A town in Washington has a treetop bridge over a busy road that’s just big enough for squirrels. It’s called the “Nutty Narrows Bridge.”
THE GRANDILOQUENT WORD OF THE DAY!
LINK TO TODAY'S WORD

Flamfoo (FLAHM-fooh)
Noun:
-A gaudily dressed woman who thinks she represents the height of fashion.
-A woman who wears gaudy clothes & thinks she is fashionable.

From Scottish variant of FLAMFEW (a gewgaw, trifle, fantastic thing)

Used in a sentence:
“Those bridesmaids' dresses are a case study in looking like a flamfoo!”

An apparent Grinch was spotted on surveillance video plowing through a Christmas display outside a suburban Indianapolis home and tips are being sought to find the man. WRTV broadcast the video recorded Sunday night by a neighbor’s camera in Greenwood. The video starts with a man getting out of a black SUV and then walking up to take a closer look at the front yard where Casie Arnold says her family had a 12-foot-tall inflatable snowman. The man gets back into the vehicle, backs up, and drives through the family’s yard and over the decoration. Arnold says they heard a pop while watching a Christmas movie. Tire tracks were in the yard. Arnold says she wonders if the driver was possibly a Grinch who doesn’t like Christmas. (https://nyp.st/2PxUSB6)

According to Federal Agents, a passenger who arrived in New York City on a flight from Guyana had seventy live birds hidden in a piece of luggage. The smuggling attempt was thwarted Saturday when U.S. Customs and Border Protection agents inspected a black duffel bag being carried by a traveler who flew from Georgetown to John F. Kennedy International Airport. The traveler, a Guyanese citizen, was not arrested. Instead, he was not allowed entry into the U.S. and was returned to his home country. Agents found the finches stuffed inside individual plastic hair curlers. The birds are often used in “singing contests” popular among Caribbean immigrants. The smuggling of finches from Guyana has previously resulted in the arrest of multiple travelers. The seized finches were quarantined and subsequently turned over to Department of Agriculture officials. (https://bit.ly/2PxGb0L)
FAKE NEWS OR FLORIDA:
Is this story "Fake News" or something that actually happened in Florida.