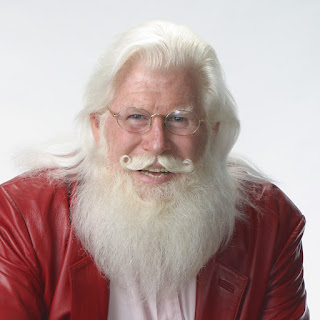 Today we visit with America’s National SANTA, Tim Connaghan. He's in the Santa Hall of Fame, the Hollywood Christmas Parade Santa, He teaches mall santas nationally, and is president of the Kringle Group. He has also written a book SURVIVING THE HOLIDAYS.  Available now - https://amzn.to/2R9inFk

"You can, you should, and if you're brave enough to start, you will." --Stephen King

IS IT A GOLF COURSE... OR IS IT A REHAB CENTER!
Brought to you by TimeForRehab.com
I'm going to give you the name of a REAL place...I want you to tell me if it houses a GOLF COURSE or a REHAB CENTER!
South Plains in Lubbock, Texas ….. REHAB

Two British senior citizens were removed from a Caribbean cruise ship and arrested after a “large amount of cocaine” was discovered in their cabin. The 70-year-old and 72-year-old suspects are being held by police in Portugal. The Marco Polo ship, operated by Cruise and Maritime Voyages, had returned to Europe from a cruise around the Caribbean. The elderly folks, who are thought to be a couple, were detained in Lisbon after Portugal’s Policia Judiciaria received information from the UK’s National Crime Agency. According to the Portuguese force, the pair were arrested on suspicion of trafficking narcotics and have been remanded in custody. Officers boarded the ship when it docked in Lisbon and searched the cabin. There they discovered 20 to 22 pounds (9 to 10 kilograms) of the Class A drug stashed away in four pieces of luggage. The suspects appeared in court in Portugal, where they were remanded in custody pending an ongoing investigation by forces in both Britain and Portugal.
(https://bit.ly/2ElOA5J)

Kylie Jenner shut down rumors that her boyfriend Travis Scott had been feuding with Kanye West. (https://pge.sx/2QEFokb)

A Florida lawyer claims to have uncovered Hugh Hefner’s private sex tapes and plans to use them in a civil case against Bill Cosby. (https://dailym.ai/2CjwRKz)

A Salvation Army Santa who was high on PCP was arrested for attacking a man outside a Pennsylvania Walmart. The judge set bail at $1,000. (https://cbsloc.al/2rJXMsT)

Santa at Olathe Bass Pro stops and prays for little boy who asked for new kidney for Christmas. A metro woman shared her amazing experience at Bass Pro Shops in Olathe with a TV station's "Tell Me Something Good" segment and it warmed hearts all over the newsroom.

Julie said:
We had a very unique and wonderful experience tonight when we went to see Santa at Bass Pro in Olathe. After the kids took their picture, they got off Santa`s lap and he asked each of the kids what they wanted for Christmas.

When he got to Levi, I said, he doesn`t talk much, but he`s on the kidney transplant list, so he would like a new kidney for Christmas.

Santa had a very surprised look on his face and immediately reached for Levi and put him back on his lap. Santa then put one arm around Levi and his other hand on his belly and started to pray for Levi.

It was the most heartfelt, sincere prayer.

He hugged Levi and set him down. He looked me in the eye and squeezed my hand.

I walked away crying. It never ceases to amaze me how God puts people in your path to bless and encourage you when you need it most, and usually it comes in the most unexpected places and ways. I`m thankful for this sweet man tonight.

Thanks, Santa at Bass Pro Shops

One programmer’s unusual way of weaning himself off Facebook
Maneesh Sethi, a computer programmer, hired a woman (at $8 an hour) to slap him in the face every time he tried checking Facebook during working hours!


THE GRANDILOQUENT WORD OF THE DAY!
LINK TO TODAY'S WORD

From knick-knack or knickknack or nicknack, "a pleasing trifle, toy," 1570s. A reduplication of “knack” - an ingenious device, toy or trinket (1530s), a specialized sense of “knack” - a stratagem or trick.

Used in a sentence:
"For my part, I keep a Nicknackatory or Toy-shop, as I formerly did over against the Exchange, and turn a sweet penny by it.”
- Thomas Brown, Letters from the Dead to the Living, 1702

The Arizona Department of Public Safety helped arrest three suspects accused of defrauding California's recycling program out of $16.1 million by accepting monetary return for out-of-state recyclable goods. Working with the California Department of Justice and the California Department of Resources Recycling and Recovery, DPS arrested 49-year-old Miguel Bustillos from Glendale, 57-year-old Anthony Sanchez from Tucson, and a third unnamed man. The three men are accused of using Bustillos' trucking company to smuggle out-of-state recyclable materials into California to cash in on the state's recycling program that pays for empty aluminum cans and plastic bottles. Through search warrants, the law enforcement agencies found 27,860 pounds of empty aluminum and plastic containers packed into trucks about to head to California. Bustillos and Sanchez were arrested and extradited to California for felony recycling fraud, attempted grand theft and conspiracy. (https://bit.ly/2EswEXO)

A Salvation Army bell ringer in Colorado is charged with stealing a red kettle containing about $400 in donations. The Fort Collins Coloradoan reported Friday that 27-year-old Nicholas Rosselis-Freeman is accused of taking the money on Nov. 30 at the end of his shift ringing a hand bell and taking donations outside a Fort Collins grocery store. Authorities say he ran off with the kettle full of money when a Salvation Army officer approached to pick it up. Rosselis-Freeman was arrested Thursday on suspicion of misdemeanor theft and released on $500 bond. No phone number could be found for him. The Salvation Army says this is the first time one of its kettles has been stolen in Fort Collins. (https://bit.ly/2QqsHJs)


FAKE NEWS OR FLORIDA:
Is this story "Fake News" or something that actually happened in Florida.
A woman got married to a tree so it could not be legally cut down
FLORIDA - (https://bit.ly/2PEapPO)
GOOD NEWS: Brought to you by WeirdGiftOfTheDay.com