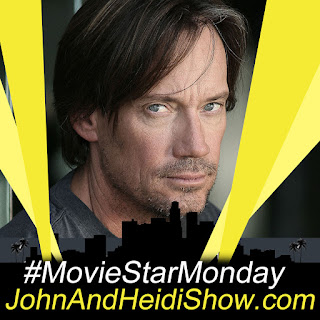 It's another #MovieStarMonday as we talk with Kevin Sorbo. He has a new movie out called Bernie The Dolphin... also his movie Christmas Dreams is out on DVD & he has a book in stores too! We'll talk about this and much more!HERE IS HIS OFFICIAL WEBSITE - http://www.kevinsorbo.net/
#KevinSorbo #Hercules #ChristmasDreams #BernieTheDolphin #JohnAndHeidiShow #MovieStarMonday

IS IT A GOLF COURSE... OR IS IT A REHAB CENTER!
Brought to you by TimeForRehab.com
I'm going to give you the name of a REAL place...I want you to tell me if it houses a GOLF COURSE or a REHAB CENTER!
The Champions in Omaha, Kentucky….. GOLF COURSE

According to an accident report, a Nebraska man arrested for DUI told police that he was driving “like Ace Ventura” when he crashed his car into a tree early Saturday morning. 26-year-old Rocky Dumais was behind the wheel of a Buick registered to his mother at the time of the 1:00 a.m. crash. Investigators say that Dumais’s car veered off the road and “struck and uprooted a tree” in the front yard of a residence. The car came to a stop after striking a nearby retaining wall. Dumais, who left the accident scene, was subsequently “taken into custody and processed for DUI” by Lincoln Police Department officers. He told cops that he crashed the Buick due to “inoperable windshield wipers,” which forced him, “like Ace Ventura,” to drive in the rain with his head outside the window. Despite that explanation, Dumais was busted for DUI, careless driving, leaving the scene of an accident, possession of drug paraphernalia, and driving with a suspended license. Dumais’s blood alcohol content was registered at .137 and cops suspected that both alcohol and drugs played a part in the crash. (https://bit.ly/2E0oAwa)

BIG SCREEN-LITTLE SCREEN:
Universal Music announced that Bohemian Rhapsody by Queen is now the most streamed song from the 20th Century.
(https://nyp.st/2zSAq92)

The owners of High Times magazine are delaying a public stock offering after missing the deadline for a second time. (https://nyp.st/2PvempU)

A study found that 7 in 10 U.S. teenagers do not get enough sleep, which raises their risk of drug use and suicide. (https://bit.ly/2QJL7V1)

A study by the University of Bath found that using a stand up desk at work does not burn more calories than sitting down.(https://bit.ly/2G5H5SA)

A former Miss Kentucky has been fired from her teaching job after she sent naked pictures to a 15-year-old student. (https://nyp.st/2L5nCjN)

A Missouri town newspaper called The Uranus Examiner is closing because of what it claims are a bunch of “uptight people.” (https://nyp.st/2zN5jM0)

Nearly a thousand people were arrested during violent protests in Paris on Saturday. (https://nyp.st/2BZpXtU)

Britain’s Secret Intelligence Service once hacked an Al-Qaeda website and replaced the bomb instructions with a cupcake recipe.

THE GRANDILOQUENT WORD OF THE DAY!
LINK TO TODAY'S WORD

Tolutiloquent (TOE-loo-TILL-uh-kwent)
Adjective:
-Pertaining to a smooth talker.
-Characterized by fluency or glibness of utterance; rapid and ready of speech.

From Latin tolutim, "trotting along” + -loquus "speaking," from loqui "to speak"

Used in a sentence:
“His tolutiloquent tendencies make him a charming deipnosophist.”

Police in Wisconsin are searching for two suspects who allegedly started a brawl at a Cracker Barrel on Halloween night, causing hundreds of dollars in damage. Newly released footage from inside the Germantown Cracker Barrel location shows a man and woman approach a manager in the restaurant’s gift shop, reportedly after the two complained of their service to an employee in the dining area. As the argument escalated at the front counter, another employee, a 16-year-old cook, tried to calm the situation. The man instead reacted by throwing a punch at the employee, and later tackling the worker and knocking him into a rack of merchandise. The woman who was with the man eventually broke up the brawl. Police are asking anyone with information to help identify the suspects, who were seen leaving in a gray Mazda. (https://nyp.st/2rqJ6ij)

MOMENT OF DUH: Brought to you by FunkyMonkeyShirts.com
A Florida man was arrested after he allegedly stole two pairs of sneakers from a department store – minutes after interviewing for a job there. Deputies in Hernando County arrested Dominick Breedlove and charged him with retail theft after the incident at a Kohl’s store in Spring Hill. According to NBC affiliate WFLA-TV, 24-year-old Breedlove went into the store shortly after the interview and started looking at a Nike display for women's shoes that did not have security tags. Breedlove left the store and later returned with a bag from a previous trip. A lost prevention officer called the Hernando County Sheriff's Office after seeing Breedlove put the sneakers, worth a combined $150, inside the bag and leaving the store. Officers arrested Breedlove on the way to his car, where he told deputies that he had planned to gift the shoes to his mother. (https://bit.ly/2QiIJVM)

Veteran Who Was Given 4 Months to Live Transforms Polluted Creek – and Lives 27 Years Longer Because of It. https://www.goodnewsnetwork.org/
Newer Post Older Post Home