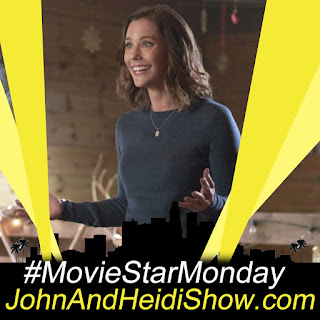 It's another #MovieStarMonday as we talk with Ashley Williams. She most recently starred in the TV Land series “The Jim Gaffigan Show”, but first won over audiences as a teenager when she played Meg Ryan’s daughter, Danielle Andropoulos, on “As the World Turns.” Later, she starred alongside Mark Feuerstein in the NBC series “Good Morning Miami” and in the Lifetime telefilm “Montana Sky.” Williams also had a memorable recurring role on the comedy “How I Met Your Mother,” as Victoria. We'll visit about her latest movie. Northern Lights of Christmas” on Hallmark Movies & Mysteries.

"The greatest danger for most of us is not that our aim is too high and we miss it, but that it is too low and we reach it." --Michelangelo

IS IT A GOLF COURSE... OR IS IT A REHAB CENTER!
Brought to you by TimeForRehab.com
I'm going to give you the name of a REAL place...I want you to tell me if it houses a GOLF COURSE or a REHAB CENTER!
Lost Creek in Austin, Texas ….. GOLF COURSE

How sad is it when even Santa suffers from a brain on drugs? Well, not the REAL Santa of course... An armed Santa robbed a drug store in Virginia of the painkiller OxyContin (also known as “hillbilly heroin”). "An individual dressed as Santa . . . beard, hat, the whole works just walked to the back of the store to the pharmacist, displayed his weapon and asked for the OxyContin," said Chesterfield County police Captain Mike Spraker. "Once he got it, he ran from the store. We had K-9 [a trail-sniffing dog and police officer trainer] right in the area, and they were there within minutes." However, the trail ended at a nearby apartment complex’s parking lot. Police feel that the man got into a car and drove off.

Meghan Markle’s dad says his daughter has “ghosted” him and is asking the Queen of England to intervene. (https://dailym.ai/2EzkbS8)

Roy Collette and his brother-in-law have been exchanging the same pair of pants as a Christmas present for 11 years -and each time the package gets harder to open. This year the pants came wrapped in a car mashed into a 3-foot cube. The trousers are in the glove compartment of a 1974 Gremlin. Now Collette's plotting his revenge--if he can get them out.
It all started when Collette received a pair of moleskin trousers from his brother-in-law, Larry Kunkel of Bensenville, Ill. Kunkel's mother had given her son the britches when he was a college student. He wore them a few times, but they froze stiff in cold weather and he didn't like them.
So he gave them to Collette. Collette, who called the moleskins "miserable", wore them three times, then wrapped them up and gave them back to Kunkel for Christmas the next year.
The friendly exchange continued routinely until Collette twisted the pants tightly, stuffed them into a 3-foot-long, 1-inch wide tube and gave them back to Kunkel.
The next Christmas, Kunkel compressed the pants into a 7-inch square, wrapped them with wire and gave the "bale" to Collette. Not to be outdone, the next year Collette put the pants into a 2-foot-square crate filled with stones, nailed it shut, banded it with steel and gave the trusty trousers back to Kunkel. The brothers agreed to end the caper if the trousers were damaged. But they were as careful as they were clever.
Kunkel had the pants mounted inside an insulated window that had a 20-year guarantee and shipped them off to Collette. Collette broke the glass, recovered the trousers, stuffed them into a 5-inch coffee can and soldered it shut. The can was put in a 5-gallon container filled with concrete and reinforcing rods and given to Kunkel the following Christmas.
Two years ago, Kunkel installed the pants in a 225-pound homemade steel ashtray made from 8-inch steel casings and etched Collette's name on the side. Collette had trouble retrieving the treasured trousers, but succeeded without burning them with a cutting torch.
Last Christmas, Collette found a 600-pound safe and hauled it to Viracon Inc. in Owatonna, where the shipping department decorated it with red and green stripes, put the pants inside and welded the safe shut. The safe was then shipped to Kunkel, who is the plant manager for Viracon's outlet in Bensenville.
Last we heard, the pants were trucked to Owatonna, 55 miles south of Minneapolis, in a drab green, 3-foot cube that once was a car with 95,000 miles on it. A note attached to the 2,000-pound scrunched car advised Collette that the pants were inside the glove compartment. "This will take some planning," Collette said. "I will definitely get them out. I'm confident." He then added, "Wait until next year... "I'm on the offensive again."

In the Thomas Nast cartoon that first depicted Santa Claus with a sleigh and reindeer, he was delivering Christmas gifts to soldiers fighting in the U.S. Civil War. The cartoon, entitled "Santa Claus in Camp," appeared in Harper's Weekly on January 3, 1863.

Used in a sentence:
“Pubert’s wife just did not find his jokes quite as gelogenic as he’d thought she would.”

A waggish person may be described as gelogenic.

WEIRD NEWS: Brought to you by WeirdGiftOfTheDay.com
How long has Santa Claus been around? Far more than Christmas trees or candy canes, Santa Claus sparks controversy among Christians. Many believers reject the idea of the kindly old gentleman in the bright red suit because it takes away the primary focus of Christmas: celebrating the birth of Jesus Christ our Savior. Certainly when the focus of Christmas becomes children's expectations of gift receiving, using St. Nicholas as the agent of distribution, we have missed the true meaning of Christmas. Unfortunately, the original Nicholas and his godly example is lost in the controversy. St. Nicholas was a Christian priest who lived in Myra, in Asia Minor (modern Turkey), from 280-343 AD. He became Bishop of Myra, and was known for his generosity. He did not like to be seen giving gifts, so the children were told to go to sleep quickly or he would not come. He also is known for giving gifts of gold to a poor man's three daughters, placing the bags of gold inside their stockings, which the young ladies had left by the fire to dry. The name "Santa Claus" was derived from the Dutch "Sinter Klaus" pronunciation of St. Nicholas. When Dutch settlers landed in New Amsterdam (now New York), their "Sinter Klaus" celebration in December came with them. Interestingly, in many other European countries, and Latin America, Santa Claus is not even the deliverer of gifts to the children. Other figures fill the role. Nevertheless, the original (the REAL) St. Nicholas did demonstrate, "it is more blessed to give than to receive" (Acts 20:35).