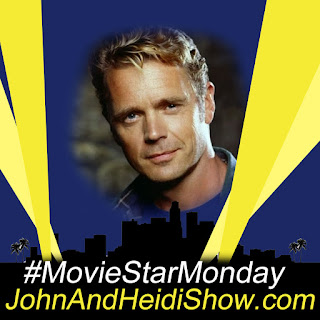 It's another #MovieStarMonday as we talk with John Schneider (from the Dukes Of Hazzard) about his lates Christmas movie and about his music career. He has been quite busy traveling with that lately. https://www.imdb.com/name/nm0773884/

TODAY IS A SPECIAL DAY! (A special thank you to NationalDayCalendar.com)
December 31
National Champagne Day
Make Up Your Mind Day
New Years Eve
No Interruptions Day – Last Work Day of the Year
Universal Hour of Peace
Leap Second Time Adjustment Day (Note: This is listed as an observance title only. Some years scientists do not make adjustments. But, if they do, then it’s done on either June 30 or December 31.)

Monday December 31, 2018
"Unless you dream, you're not going to achieve anything." --Richard Branson

IS IT A GOLF COURSE... OR IS IT A REHAB CENTER!
Brought to you by TimeForRehab.com
I'm going to give you the name of a REAL place...I want you to tell me if it houses a GOLF COURSE or a REHAB CENTER!
The Orchard in South Hadey, MA….. GOLF COURSE

According to court filings, an Iowa woman who left her three small children home alone late Thursday night was arrested on endangerment charges after one of the children called 9-1-1 to report that “her mom and dad left and she needed help watching YouTube.” Investigators charge that 23-year-old Natalee Kahl left the children--ages five, three, and one--alone around 10:00 p.m. in the family’s apartment. Police were dispatched to the residence after one of the children called 9-1-1 to report that she needed help watching videos online. Cops estimated that Kahl left the children by themselves for about forty minutes. Kahl returned to the home while officers were inside the residence with her children. Kahl reportedly “admitted to leaving the house to go get her boyfriend from a neighbor’s house” and that her offspring “would not be able to take care of themselves” in case of an emergency. Kahl was arrested on three counts of misdemeanor child endangerment. She also faces a possession of drug paraphernalia rap after cops found a glass pipe with marijuana residue in the home. (https://bit.ly/2EA3upE)


BIG SCREEN-LITTLE SCREEN:
Paris Hilton says she is not giving back the $2 million engagement ring she got from ex-fiancé Chris Zylka. (http://goo.gl/dvfkWV)

Actress Betty White says she has no plans to retire at the age of 96.
(https://pge.sx/2QLl8gK)

Liam Neeson hinted that he could be working on another sequel to the movie TAKEN. (https://pge.sx/2QLu8CH)

A survey by SlickDeals found that the average shopper spent $520 on Black Friday this year. (https://bit.ly/2EGpBtO)

A Wisconsin robbery suspect was caught by police after he was swarmed by a group of mosquitos. (https://nyp.st/2SgkO6n)

Natural Light Beer is selling a a 77 Pack to commemorate their founding in 1977. (https://bit.ly/2rRDrlF)

Uno, Pinball, and the Magic 8 Ball have all been inducted to the National Toy Hall of Fame. (https://bit.ly/2V74zuj)

A study found that colleges can reduce stress amongst students by providing them with therapy dogs. (https://bit.ly/2CuP6wC)

A Chinese food delivery man was arrested in New York City after he rode his bicycle through the Lincoln Tunnel. (https://nyp.st/2CtcnyY)

Dunkin Donuts is partnering with Harp Brewery to make their very own beer.
(https://bit.ly/2OoIUNJ) (Do you think they'll call it DRUNKEN DONUTS?)
The McDonald’s Big Mac turned 50-years-old this year.
(https://nyp.st/2LW3JOZ)

We have musical roads. There’s a highway in Lancaster, California that plays the “William Tell Overture”—or the theme from “The Lone Ranger”—whenever cars drive over it at 55 mph. Yes, roads that sing!

Middle English: from Old French orguillus, from orguill ‘pride.’ The word was rare from the 16th century until used by Robert Southey and Sir Walter Scott as a historical archaism and affected by 19th-century journalists. Earliest documented use: 1275.

Used in a sentence:
“So when Sir Gawaine was hurt, they on King Arthur's party were not so orgulous as they were toforehand to do battle.”
-Le Morte D'Arthur, Volume II by Thomas Malory

The Grandiloquent Word of the Day Calendars are still available to deliver before the first of the year!https://gwotd-2019-calendars.backerkit.com/hosted_preorders
Two remarkable calendars – grandiloquent words with definitions, period illustrations, daily holidays, and more!

WEIRD NEWS: Brought to you by WeirdGiftOfTheDay.com
A Kentucky State Police trooper, a retired State Police colonel, and a county coroner have been accused of several crimes including transporting moonshine and eyeballs. Scott County Coroner John Goble and retired State Police Lt. Col. Mike Crawford were indicted Thursday on multiple counts of receiving stolen property. The charges stem from the theft of $40,000 worth of ammunition and weapons. State Police began investigating the theft in December and placed Master Trooper Robert M. Harris on unpaid leave. He's accused of providing stolen items to Goble and Crawford. Harris has been indicted on unlawful taking and second-degree forgery. Goble also is accused of transporting a pair of donor eyes and moonshine, as well as possessing 90 Oxycodone tablets. It's unclear if they have lawyers. (https://goo.gl/diSp3k)
MOMENT OF DUH: Brought to you by FunkyMonkeyShirts.com

A Mississippi woman who led authorities on a car chase into Alabama has been arrested while stopping to get gas. WTOK-TV reports 29-year-old Shakala Newsome was arrested Wednesday morning at a Sumter County truck stop. Mississippi Highway Patrol Sgt. Andy West says troopers on Interstate 20 attempted to pull Newsome over for a traffic violation, but she fled toward Alabama. Sumter County, Alabama, Sheriff Brian Harris says the Mississippi troopers chased Newsome to the end of their jurisdiction and then notified Alabama authorities. Harris says authorities spotted Newsome pumping gas at the York truck stop and she attempted to flee, but was quickly arrested. It’s unclear what charges have been filed against Newsome. The station says Newsome will be extradited to Mississippi. It’s unclear if she has a lawyer.
(https://nyp.st/2T45IRx)


FAKE NEWS OR FLORIDA:
Is this story "Fake News" or something that actually happened in Florida.

When Flight Attendant Had to Work on Christmas, Her Dad Booked Seats On All 6 of Her Flights to Spend Time With Herhttps://www.goodnewsnetwork.org/
Newer Post Older Post Home