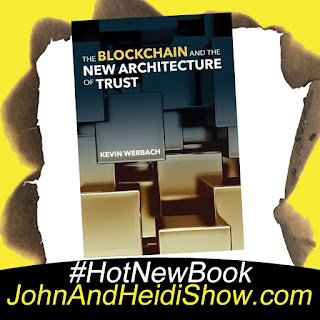 Super excited to visit with Kevin Werbach about his new book "The Blockchain and the New Architecture of Trust (Information Policy)"
AVAILABLE NOW - https://amzn.to/2G0Hoyb

TODAY IS A SPECIAL DAY!!!
(A special thank you to NationalDayCalendar.com)
December 8
National Brownie Day
Pretend To Be A Time Traveler Day
National Rhubarb Vodka Day
Skywarn Recognition Day
December 9
National Pastry Day
Weary Willie Day
Saturday December 8, 2018
"A leader is one who knows the way, goes the way and shows the way." -- John C. Maxwell
Sunday December 9, 2018
"We generate fears while we sit. We over come them by action. Fear is nature's way of warning us to get busy." --Dr. Henry Link

A Kentucky woman has been arrested after being accused of letting young children smoke marijuana in her apartment. Janet Cates of Lexington was busted Monday on a charge of unlawful transaction with a minor. Cates allegedly let her neighbor’s children, aged 8 and 9, smoke pot while inside her residence. The children told police that Cates’ boyfriend, Josh Thomas, made them drink mouthwash and sprayed cologne to try to mask the smell of the marijuana. According to the news outlet, police are still on the hunt for Thomas. (https://nyp.st/2TTlhMS)

Ozzy Osbourne had to cancel a bunch of shows in October after he got an infection from a manicure. (http://goo.gl/4RcSm2)

California police say a Tesla drove seven miles on auto-pilot while its driver was passed out drunk behind the wheel. (https://bit.ly/2zEiYoE)

A Kenyan man needed to have emergency surgery after a cell phone he was smuggling into prison got stuck in his rectum. (https://bit.ly/2SpwK5l)

Funky Flavored Candy Canes! Gravy-flavored candy canes cross some serious lines in world of holiday food. If that doesn't sound good to you.... that's OK... they also had DILL PICKLE and WASABI flavors too!
https://mashable.com/2016/11/22/gravy-candy-canes/#7dIsRC_218qb

They surveyed 1,000 American adults via Google Surveys and asked for their favorite holiday delicacy. The winner? Pumpkin pie, with one-third of Americans who have a favorite treat saying it’s their No. 1 choice.

Barry Manilow didn’t write his hit song “I Write the Songs”
And before he recorded it, Barry didn’t even think it was a particularly good song.

Pandiculate (pan-DIK-yoo-layt)
Verb
1. To stretch the torso and upper limbs, typically accompanied by yawning.
From Latin pandiculari, "to stretch oneself," from pandere, "to stretch.”

Used in a sentence:
“Professor Throttlebottom was always uncertain as to whether the pervasive pandiculation during his lectures was due to the early hour, or his delivery style.”

WEIRD NEWS:Brought to you by The Weird Gift of the Day
A man was arrested after police say he used a scooter to try and break into a bank in Nashville. According to an affidavit from Metro Nashville Police, officers were called to the Bank of America Plaza on Union Street for a burglary call. Witnesses reported seeing the suspect, identified as Curtis Causey, swinging a Bird scooter at the door. Officers arrived in time to see him trying to run from the scene and managed to take him into custody. A witness later identified him as the suspect. As he was being booked, police said he claimed he would “run from the police every time. I’m not going to make it easy for you to arrest me.” He was charged with criminal impersonation, vandalism and evading arrest. The incident caused $2,000 worth of damage to the door and some patio furniture. The scooter was destroyed. (https://goo.gl/EGtQrp)
MOMENT OF DUH: Brought to you by FunkyMonkeyShirts.com
Cops say that a Florida Man upset that his baked potato was undercooked allegedly stabbed a woman in the head with a fork in a domestic spud rage incident. 36-year-old Kenneth Crumpton was busted today on a felony aggravated battery with a weapon charge in connection with the 12:30 a.m. attack inside a Jacksonville-area residence. Crumpton is being held in the Nassau County jail in lieu of $25,000 bond. Investigators charge that Crumpton, displeased with the preparation of his potato, repeatedly stabbed the victim in the head with a fork. Police noted that blood was visible on the woman’s head, and that she had suffered multiple stab wounds. During questioning, Crumpton told cops that he did not stab the woman. Instead, he claimed to have thrown the fork, which “glanced off her head.” The woman was not seriously injured and declined a police offer of medical assistance. (https://goo.gl/anfHts)
FAKE NEWS OR FLORIDA:
Is this story "Fake News" or something that actually happened in Florida.
An Orlando couple were arrested after having sex in an empty classroom
on back to school night
FAKE NEWS

GOOD NEWS: Brought To You By Odeeva...the monthly subscription for ladies!
When Homeless Man Finds $17,000 Outside of Food Bank, He Turns
It In So It Can Help Feed Others. https://www.goodnewsnetwork.org
Newer Post Older Post Home