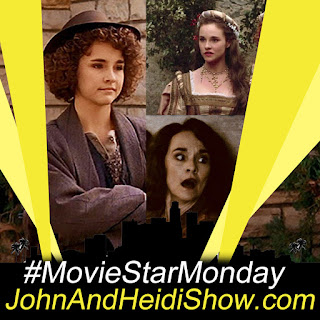 It's another #MovieStarMonday as we talk with Diane Franklin. She was the French foreign exchange student “Monique” in the 80s classic “Better Off Dead” also one of the princesses from “Bill and Ted's Excellent Adventures”. Now she is working with the OTHER princess again, who recently signed on to produce Diane's daughter's first feature film. “It's Gonna Get Ruff”#JohnAndHeidiShow #MovieStarMonday #DianeFranklin #Amityville #Monique #BetterOffDead #BillAndTed

A study conducted in Spain found that getting less than six hours of sleep will up your risk of having a stroke. (https://bit.ly/2FulUJ2)

A Nashville inmate claimed he “didn't have anything on him” as a bag of pink Fentanyl was hanging from his buttocks. Kenneth A Johnson is facing news charges of assault and possession of contraband in a penal institution after the ordeal on Jan. 5th. According to police affidavits and a jail incident report, Johnson was being searched on suspicion of contraband. Reports say Johnson was non-compliant and kept stating that he “didn't have anything” despite officers reporting that a plastic bag was sticking out from between his butt cheeks. Officers administered pepper spray to Johnson's face area and buttocks area and were able to remove the substances, which turned out to be tobacco and pink Fentanyl. At one point, an officer went to reach for one of the baggies and Johnson is accused of stepping on that officer's hand. (https://bit.ly/2M6tc6d)

Justin Bieber and Hailey Baldwin confirmed to People Magazine that their official wedding will take place on February 28th. (https://yhoo.it/2FAuhC5)

HBO announced that the final season of Game of Thrones will premier in April of 2019. (https://nyp.st/2CpdGh5)

Kim Kardashian officially confirmed on “Bravo’s: Watch What Happened Live” that baby #4 is on the way and will be here in May via surrogate.(http://goo.gl/KyC5f5)

Russia has lost control of one of its satellites. https://motherboard.vice.com/en_us/article/7xyg5a/russia-has-lost-control-of-its-only-space-telescope

Scientists have a new theory about those giant heads on Easter Island. It’s now thought that the heads were placed in certain spots to designate a source of fresh water.
https://www.inquisitr.com/5245476/theory-easter-island-statues-origin/Thanks to an email typo, a Phoenix man is about to head out for the party of his lifetime. He’s going to a bachelor party for a man he’s never met on the other side of the country, using money he raised on GoFundMe. The GoFundMe campaign was titled: Help me go to the bachelor party of a stranger!” Will Novak got a group email with the subject line ‘URGENT INFO: Angelo’s bachelor party.’ He almost deleted it, but his curiosity led him to open it. It was a bunch of guys talking about going on a ski resort vacation for a bachelor party Martin Luther King Day weekend. It turns out Angelo and all his buddies live in Vermont. One of Angelo’s friends is also William Novak. His email address is only one letter off from Will Novak’s in Arizona. Hence the mistaken invitation.… Part of the invitation read: “ATTIRE: Bring your ’80s attire, ridiculous awesome get-ups, etc. For skiing, ask yourself, “What would Angelo wear?’ Wear that.”… Will Novak from Arizona responded with an over-the-top reply: “I do not know who Angelo is. I am a Will Novak who lives in Arizona. Vermont seems like a very far way for me to travel for the bachelor party of a guy I’ve never met. That being said: (expletive) count me in! From the contents of this email, Angelo sounds tremendous and I want to help send him off in style. I hope his bride (or groom) to be, is awesome. I should note that being a desert dweller, I’ve only been skiing once and I was real bad at it. I hope you all are patient with me on the slopes. In exchange for said patience, I can bring my sweet Nintendo Switch so we can play games in the cabin/chalet/whatever in the evenings. If Angelo isn’t into video games I’m happy to bring Sudoku puzzles or just Indian Leg Wrestle or whatever he likes.”… The guys replied: “We agree that your timely response may have been one of (if not the best) responses to an e-mail that has ever been sent. And we insist on you coming, this would surely make Angelo’s day. We can pick you up from the airport. … Don’t worry about the video games, but bring Sudoku puzzles (Angelo loves those), and yes we would prefer Indian Leg Wrestling.” https://www.gofundme.com/help-me-go-to-the-bachelor-party-of-a-stranger

Chiraptophobia… Fear of being touched.

A brewery worker at craft beer brand Brewdog is responsible for a nasty word (‘Mother F***er Day’) being printed on the bottom of thousands of cans of beer — and has been rewarded by being named Employee of the Month. The batch of 200,000 cans of Punk IPA had to be recalled after Brewdog management were made aware when customers uploaded images of the cans on to social media.… Graeme Wallace, a packing manager at the Scotland-based company, was annoyed that his bosses demanded that employees “be more punk” and decided to print the swear word on the bottom of the beer cans. But despite the recall the bosses laughed it off and named him Employee of the Month. Probably because the free publicity has been worth hundreds of thousands of dollars.

A six-hour standoff between police and a 40-year-old man who allegedly splashed gasoline on the floor of a California (Novato) convenience store “while threatening to burn it down” ended when police defused the situation with a vape pen. The suspect was angry with some kind of problem at the pumps early on Saturday morning before he attempted and failed to ignite a gasoline-soaked floor mat at the convenience store. Police also said he was angry over family issues. After failing to set the convenience store on fire the man fled to his car. Officers delivered a cell phone to the man using a robot and were eventually able to use it to negotiate with the suspect. An initial request for a cigarette was denied due to the possibility he was covered in gasoline, though law enforcement later talked him into accepting a vape pen instead. This defused the situation. After the item was delivered by the robot, the man stepped out of his vehicle and was arrested without further incident.