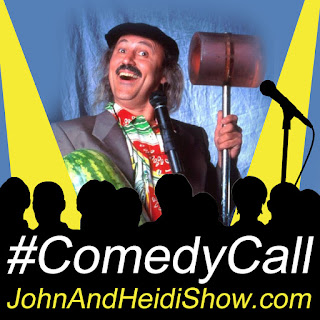 John does a #ComedyCall with the one and only Gallagher! He's WAY MORE than a guy that smashed watermelons (althought he does that too... with his sledge-O-matic) he's actually a very smart inventor, poet and even musician!
Learn more at gallaghersmash.com

SURVEYS, STUDIES & SUCH!
If your throat is getting scratchy, you might be better off reaching for a Hersey bar over cough syrup. At least that’s what one leading expert (University of Hull) is advising — as he says that chocolate is better for a cough and respiratory problems than standard medicine.

A Pennsylvania man allegedly left two pounds of marijuana in the back seat of an Uber — and was arrested after he tried to get the ganja back from undercover state troopers. When 21-year-old Malik Mollett hailed an Uber near Pittsburgh in late December, he left behind his bag containing the weed. Mollet had contacted Uber, which reached out to the driver about the missing bag. The unidentified driver called police earlier this month after finding the load of marijuana sealed in plastic inside the bag. A trooper with the Pennsylvania State Police then posed as the Uber driver on Jan. 9th and called Mollett to set up a meeting to return the bag to him. The trooper texted Mollett a photo of the bag and Mollet confirmed it was his. The two made arrangements to meet up at a McDonald’s. When Mollett arrived at the McDonald’s, the undercover trooper went inside and gave him the carrier. Then another trooper entered the fast-food joint and quickly arrested Mollet. (https://nyp.st/2CmVVPv)

M. Night Shyamalan scored his fifth number one movie after Glass brought in $47 million over the holiday weekend. (https://yhoo.it/2S1zb1t)

WAYNE is a new YouTube Original from the guys who wrote Deadpool. In this gritty and sometimes bloody tale, sixteen year-old Wayne sets out on a dirt bike with his new crush Del to take back the 1978 Pontiac Trans Am that was stolen from his father before he died. It is Wayne and Del against the world. WAYNE will star Mark McKenna (“Sing Street,” “Kat and Alfie: Redwater”) as “Wayne” and Ciara Bravo (“Big Time Rush,” “Red Band Society”) as “Del.” Joshua J. Williams (“Mudbound”) will also recur as “Orlando”.

Sports Illustrated has postponed publication of its Swimsuit Issue from February to May. (https://nyp.st/2Mj2UO1)

A video has gone viral of three women twerking on the roof of their SUV as it drove down a Missouri Highway. Police were called but the girls did not receive any fines. (https://bit.ly/2sx2g6L)

A hotel dishwasher in Miami was awarded a $21 million dollar settlement after her boss violated her religious rights by forcing her to work on Sundays.
(https://bit.ly/2FDOcjk)

A dog interrupted a soccer match in England after it ran onto the field. (https://bit.ly/2FxR02e)

The FDA is threatening to pull e-cigarettes from stores if they continue to market their product towards teenagers. (https://nyp.st/2Hnsent)

The human family tree has gotten a new member after a DNA test confirmed the existence of a “missing link.” (https://bit.ly/2FNqocV)

FUN FACT FOR YOU:
Share this with your friends... they'll think you're really smart!
A study in shades of grey is the REAL name of the famous picture most know as Whistlers Mother.
FEAR THIS.... FUN WITH PHOBIAS!

WEIRD NEWS: Brought to you by WeirdGiftOfTheDay.com
Police say a burglar is in custody after a wild crime spree in Hoboken last Wednesday that had a number of twists and turns along the way. It all started when authorities say the man, wearing a construction jacket, broke into a pizzeria through the roof. He tried to break an ATM to steal cash but was unsuccessful, then went into the back and took two dozen bottles of Snapple. The suspect tried using a fire extinguisher to break out through the front door, only to find the roll-down gate closed, so he was trapped. He climbed back up, crawled through a common attic, and dropped into the nail salon next door, then proceeded to steal some money from the salon. Upon realizing he was trapped in that location, he climbed back up into the crawl space and went into the liquor store next to the nail salon. After stealing liquor from the store, he broke a 6-foot hole and went into a dollar store, where he was unable to escape. In the end, police say he drank the liquor and fell asleep on a shelf. The dollar store proprietor found him at about 10:00 a.m. and called police.(https://7ny.tv/2DmxEeg)

Apparently, it’s not just in Hollywood that people return to the scene of the crime. Largo, Florida police say they arrested a man who tried, unsuccessfully, to rob two banks before returning to the first one. Police said in a Facebook post Ronald Massey tried to enter the Bank of America on Wednesday morning, but found the bank wasn’t open yet. Massey wore a mask while trying to open the bank’s door around 8:20 a.m., but then rode away on his bicycle when he could not get inside. Employees of the bank called police to report the incident. About 40 minutes later and roughly a quarter-mile south of the Bank of America, police got another reporter of an attempted robbery. Massey went to the BB&T bank where he tried to get money using a knife, but safety glass at the bank forced him to leave empty handed. Tellers behind the safety glass left the area to call police. That’s when Massey went back to the Bank of America. There, he was met by a Largo police officer, who was taking a report, and was arrested.
(https://bit.ly/2FFkuvs)


Instead of Selling Her $1.7 Million Home, Woman is Giving It Away to the Winner of a Letter-Writing Contest
https://www.goodnewsnetwork.org/woman-is-giving-away-multi-million-dollar-alberta-house-in-letter-writing-contest/