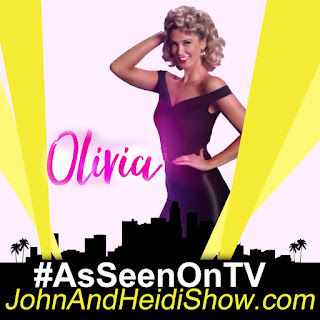 Delta Goodrem, singer, songwriter, performer, actress, and philanthropist. Her latest album Wings of the Wild debuted at #1 with the platinum hit song "Wings", the singer's 9th #1 single.  She is currently a judge on Australia version of The Voice. Delta portrays Olivia Newton-John in the new Lifetime movie "Olivia Newton-John: Hopelessly Devoted To You" She is also personal friends with Olivia, and the ladies worked together on a duet and had a chance to work together again when Delta re-recorded her classic hits for the film. - https://www.imdb.com/title/tt8426934/

A study by The American Heart Association found that drinking diet soda is linked to a higher risk of stroke and heart disease. (https://cnn.it/2tk5QkS)

Police say that a Schenectady man apparently got his phone numbers mixed up, and that got him arrested. Richard J. Betters Jr. is facing a charge of third-degree criminal possession of a controlled substance, a felony, after he sent a text message of a drug offer to a Rotterdam police detective. The detective played along with the offer and arrested the 44-year-old man last Tuesday at the Rotterdam Taco Bell, where Betters was found to be in possession of 20 Oxycodone pills. Police believe Betters had the detective’s mobile number because of prior dealings the detective had with him. Betters’ mugshot showed facial injuries that were present when the police encountered him. He was arraigned and ordered held on $20,000 bail. (https://bit.ly/2TzEra9)

BIG SCREEN-LITTLE SCREEN: Brought to you by ChannelSurferTV.com
“Alita: Battle Angel” took in $27.8 million to open atop the weekend box office. Last week's champ, “THE LEGO Movie 2: The Second Part” slipped to second place with $21.2 million. Another newcomer, “Isn't It Romantic” debuted at No. 3 after banking $14.2 million. “What Men Want” dropped to fourth with $10.' million. “Happy Death Day 2U” capped the top five with $9.8 million.
SCOOP OF THE DAY: Brought to you by BetterCreditCards.net
A Cleveland Fire Chief was arrested three times in one day for being drunk at the airport. (https://dailym.ai/2GruzfC)

JOSE CUERVO has opened an ALL YOU CAN DRINK TEQUILA TRAIN in Mexico. The Jose Cuervo Express will run from Guadalajara to the town of Tequila, Mexico and feature unlimited amounts of the Agave Spirit.
(https://fxn.ws/2GLQvS5)

Vladimir Putin was reportedly knocked down in a judo match by a Female Russian Olympian. (https://dailym.ai/2DOjKAJ)

8 THINGS POSITIVE PEOPLE DO DIFFERENTLY
Find something every day to look forward to. Whether it’s catching up on a favorite Netflix show, trying out a new dessert recipe, or having coffee with a friend, these things don’t have to be big. Having concrete activities to look forward to will make your days unique, distinct, and hopefully give each one a sheen of happiness.
Celebrate the small stuff. Don’t prolong happiness. Find joy in even the tiniest things — your favorite song coming up on shuffle, a funny text from a friend, a beautiful sunny day — because it adds up. Soon, you won’t have to stop and smell the roses because you’ll be smelling them all the time.
Be kind. When in doubt, choose kindness. Positive people look on the bright side, sure, but they also tend to pay it forward by passing on their positive energy to others. Giving is generous, but it also makes the giver feel even better.
Stay busy. “Busy” isn’t code for “stressed out of your mind.” Instead, being busy means filling your life with fulfilling activities. It relates back to having something every day to look forward to. Start a hobby. Structure your weekends with fun things to look forward to. Most of all, be proactive about keeping busy, because living your life to the fullest is up to you.
Accept responsibility for your actions. Being positive doesn’t mean being delusional. By owning up to where you trip up or make mistakes, you’re being honest with yourself. So, since you’re not hiding from yourself, you can then…
Forgive yourself. As much as you want to treat others with kindness, you deserve the same treatment. Okay, so we all make mistakes, and we all have regrets. Learn from them. Forgiving yourself will make it infinitely easier to…
Know when to move on, and not dwell on defeat. You gotta pick yourself up, dust yourself off, and valiantly forge ahead. A positive person knows that a defeat isn’t the end of the journey, but part of the journey.
Resist comparisons. Being positive is far simpler when you do not set yourself against others, as we all have separate strengths and struggles. Instead, work on achieving your own fulfillment, which you can only find by searching inwards–and, of course, by staying positive.

FUN FACT FOR YOU:
Share this with your friends... they'll think you're really smart!
Dead Women Can Give Birth. It’s very rare, but it has been known to happen. Called “Coffin Birth,” it’s a phenomenon that occurs when a pregnant woman delivers a child spontaneously after her death—due to gases that built up in the abdominal area, putting pressure on the mother’s uterus and forcing the baby out the birth passageway.

WEIRD NEWS: Brought to you by WeirdGiftOfTheDay.com
A 64-year-old Florida Woman is free on bond after allegedly groping and grinding upon a younger man who declined the defendant’s sexual advances and an offer to accompany her back to her residence in “The Villages,” the country’s largest retirement community. Police charge that Marrian Ann Zambrano recently got criminally frisky with an employee of a restaurant near her home. Charged with battery, Zambrano has pleaded not guilty to the misdemeanor charge and is next due in court on March 19th. According to a police report, the victim told cops that he was standing outside the closed eatery at 7:45 p.m. when the tipsy woman “grabbed him by his ‘crotch’ and began touching him in that area.” Two witnesses corroborated the victim’s account and surveillance video showed Zambrano “hugging the victim and apparently kissing his neck.” Zambrano was arrested for battery and booked into the Sumter County jail. (https://bit.ly/2Gtdv9i)

According to a news report, a man melting down dental fillings inside a Massachusetts apartment building caused fire officials to deem the dwelling uninhabitable because of mercury contamination. Fall River firefighters were called to Hamlet Street apartment building last Saturday and learned a 51-year-old man had tried to melt fillings on January 25th. The man, who received the fillings from his dentist grandfather, thought the fillings were made of silver, but the fillings were actually made of mercury. The man then became sick and has been in the hospital since January 28th. The man’s girlfriend called the building’s management company prompting fire officials and a HAZMAT team responded to the building Saturday. WPRI reports there were “elevated levels” of mercury in the man’s apartment and other areas of the building. The building was deemed uninhabitable and won’t be opened until a crew cleans up the building. (https://bit.ly/2IaYOsX)
THESE THREE THINGS!
GOOD NEWS: Brought to you by www.80sInTheDesert.rocks

Near-Death Experience Inspires Inventor to Create Wetsuit That Allows the Disabled to Swim Once More
https://www.goodnewsnetwork.org/near-death-experience-inspires-inventor-to-create-wetsuit-that-allows-the-disabled-to-swim-once-more/

Awesome story! Please feel free to share YOUR good News too!
Also, consider joining John & Heidi at 80s In The Desert on
May 3rd & 4th in Las Vegas – www.80sInTheDesert.rocks
(Use promo code RADIO to save $25 per ticket)