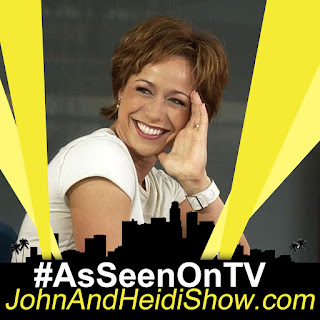 Today we have an intervew with the host of TLC’s hit home makeover series “Trading Spaces”! Paige Davis & crew are back for season 10! This was the first show of it's kind in 2001. Now back on TV with more fun than ever! Saturday nights on TLC TV!

A 37-year-old Michigan man spent the night in the Houghton County Jail after he allegedly fired his gun into a snowbank after his car got stuck. Police were called to the scene for multiple reports of gunshots shortly after midnight Tuesday night. When officers arrived, they found the man outside his vehicle along with several shell casings on the ground. Upon investigating the man and his vehicle, they also found a pistol. Officers determined the man was intoxicated and he was taken to the county jail. The incident has been turned over to the Houghton County Prosecutor’s Officer where charges could possibly be filed. (https://bit.ly/2TQdnXn)

Bravo star Jeff Lewis, of the show of “Flipping Out,” was dumped after he discussed his relationship on air. (http://goo.gl/qmj2bJ)

Lee Daniels says the set of “Empire” has been a rollercoaster the past few weeks. (https://pge.sx/2Ju6pDG)

Jenny McCarthy says she was MISERABLE working with Barbara Walters on “The View.” (https://pge.sx/2Febdre)

SCOOP OF THE DAY: Brought to you by BetterCreditCards.net
Twenty seven states have now made it legal for drivers to eat roadkill that they hit with their car. (https://goo.gl/gKcMSS)

A video has gone viral of a man in a wing suit flying over Los Angeles. Several people called 911 saying it was a UFO because it was like nothing the people of LA have ever seen before. (https://goo.gl/XjpGYt)

Jennifer Lopez has been working out in a New York City Gym that has windows facing 5th Avenue and fans are now clamoring to get a glimpse of her abs. She’s trying to get in the best shape possible for her wedding. https://goo.gl/c1qT2V

A false alarm of an imminent attack caused a stampede at Disneyland in Paris. They alarm was from a broken escalator but people thought it was an attack siren. https://goo.gl/DX5qRR

FUN FACT FOR YOU:
Share this with your friends... they'll think you're really smart!
Chewing Gum Takes as Long to Digest as Anything Else. You probably know that swallowing gum doesn’t take the seven years to digest that moms still tell their kids to keep them from choking. But it’s hard not to pause when about to swallow gum and assume it must sit in your system for at least a little while longer than breakfast or lunch. In fact, it’s digested just as quickly as anything else.

Leukophobia… Fear of the color white.

WEIRD NEWS: Brought to you by WeirdGiftOfTheDay.com
One Indiana man has enough mugshots to populate an Instagram account. They're all recent, and law enforcement is not happy about it. Johnson County Sheriff Duane Burgess said this repeat offender was arrested last week and is not leaving his jail anytime soon. Burgess was quoted as saying, “He is just a menace to Johnson County citizens.” Burgess is talking about 35-year-old Steven Wagers. Wagers has been arrested seven times in the last six months, including twice within three days last Friday and Monday. Records show Wagers has been arrested nearly 30 times over the last 17 years. Most of his arrests are for thefts and drug possession. Burgess said, “Every time we catch him and we arrest him he’s got some kind of narcotics that he’s in possession of. It’s been an occurrence where I’m walking in the jail and he’s being released and I’m like ‘Stay out of jail, Steven.’ And he’s returning the next day.” (https://bit.ly/2UMIZL5)

After an Ohio man was sentenced to decades in prison earlier this month, he lashed out in court — and the judge was not pleased. 32-year-old Manson Bryant appeared in Lake County Common Pleas Court in Painesville on March 1st. He was charged with aggravated robbery and kidnapping in July 2018 following an alleged home invasion. Bryant, after expressing remorse for what he did, was sentenced to twenty-two years in prison by Judge Eugene Lucci. In a video that was released last Tuesday and published by Fox affiliate WJW, Bryant tried to fight back -- seemingly by shouting expletives at the judge. Bryant appeared to be restrained by law enforcement in the court. As a result of his outbursts, Lucci added six more years to Bryant's sentence. The judge said, “It was clear that the remorse he was trying to portray was phony and that he wasn't remorseful at all.” (https://fxn.ws/2Oj4twk)
THESE THREE THINGS!
What do these 3 things have in common:

(They're HOLY or HOLEY)


Awesome story! Please feel free to share YOUR good News too!
Also, consider joining John & Heidi at 80s In The Desert on
May 3rd & 4th in Las Vegas – www.RadioTravelGroup.com
(Use promo code RADIO to save $25 per ticket)
Newer Post Older Post Home