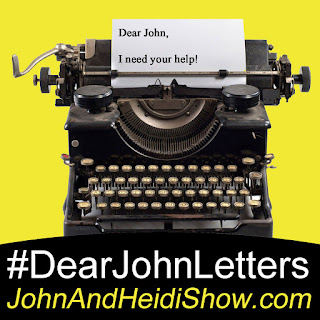 Today we have called in some help for our “Dear John Letter”. We have “joy expert" Joy Baldridge, Keynote and TEDx speaker, Author and World Class Trainer/Facilitator, to help answer our letter and we'll talk about her new book “The Joy in Business: Innovative Ideas to Find Positivity (and Profit) in Your Daily Work Life” AVAILABLE NOW HERE - https://amzn.to/2HUToR5

I've been pretty gloomy at work lately. What can I do be happier at work?

Signed – Case Of The Mondays Everyday!

A survey found that over half of young people don’t have a romantic partner.
(https://goo.gl/bAiVhY)

A Florida woman named “Crystal” was arrested for crystal meth in Homosassa last Wednesday. According to the Citrus County Sheriff’s Office, detectives served a search warrant after it was learned that the home was used to sell significant amounts of methamphetamine. Detectives had to shuffle through many layers of litter and debris both inside and outside of the home during the search. The sheriff’s office said the home also had exposed wiring, open septic, and other safety hazards. It also did not have power supplied to the property, running power from a generator instead. Detectives found approximately eighteen grams of methamphetamine. A portion of the drugs were recovered in areas accessible to children in the home. Detectives also found drug distribution equipment and meth already packaged for sale. Huggins was arrested for trafficking in methamphetamine. (https://bit.ly/2UF31a2)


The first official trailer for Toy Story 4 has already been seen more than 32 million times. https://goo.gl/nUcyQu

“US” brought in $29 million dollars during its box office debut. https://goo.gl/JXa4KN


SCOOP OF THE DAY: Brought to you by BetterCreditCards.net
A Russian tourist was busted for trying to smuggle an orangutan out of Indonesia in his suitcase. https://goo.gl/K1DP5U


Madonna has told friends that she’s launching a full fledged comeback tour at the age of 60. https://goo.gl/bn5Zs6

Barbara Streisand is catching heat for Tweeting that Michael Jackson’s accusers were “thrilled to be there” and that “his sexual needs were his sexual needs.” https://goo.gl/41ah9q
A survey found that millennials care more about their date’s politics than having good sex with them. (https://nyp.st/2TQjmwj)

Scientists working in China have shocked the scientific world with the discovery of fossils of over 50 species of life that have never been seen.

One of the fastest-growing segments of marijuana buyers is people 65 and older. Most states now have legal medical marijuana, and 10 of them allow anyone 21 or older to use pot recreationally. Many Americans — 61 percent — support legalization for recreational use, and those 65 and older are increasingly supportive. The reason is obvious: the aging are seeking to treat the aches and sleeplessness and other maladies of old age with the same herb that many of them once passed around at parties.

FUN FACT FOR YOU:
Share this with your friends... they'll think you're really smart!
One in 10 Europeans Were Conceived on IKEA Beds. You knew the massive retailer was popular, but probably didn’t realize they were something of an aphrodisiac. The producer of affordable furnishings and everything else is so ubiquitous throughout Europe that, according to The New Yorker, a full 10 percent of Europeans have been conceived on a bed from IKEA.
NOW FEAR THIS.... FUN WITH PHOBIAS!


WEIRD NEWS: Brought to you by WeirdGiftOfTheDay.com
This is something you don’t see at a Wawa convenience store everyday: an allegedly irate woman wielding a four-pronged tire iron. As 6ABC in Philly reports, it happened earlier this month at a Wawa in Upper Darby, Pennsylvania. Police tell the news station that 51-year-old suspect Aretha Robinson allegedly grabbed the tire iron as a weapon as the result of a parking space dispute with another woman at the store. Upper Darby Police Superintendent Michael Chitwood told 6ABC, “The victim got into the parking spot before the defendant did. It all went downhill from there.” Police say Robinson used the tire iron to attack a 41-year-old female who entered the store after parking her car, with Robinson following after her. Robinson allegedly hit the woman on the he right side of her head using the four-pronged tire iron. The video shows Robinson with the tire iron in her hands as she finally gives it over to arriving officers, just before they arrest her. (https://bit.ly/2JuKlsr)

Officers arrested an Arkansas man on a long list of charges after leading police on a chase — twice — last weekend. The driver, identified as 25-year-old Jose Luis Reyes, faces more than twenty charges ranging from weapons offenses to littering. Police said Reyes had an outstanding warrant with $75,000 bond at the time of the chase. According to an arrest affidavit, Lowell police spotted a white Dodge Charger Hellcat care driving east. Lowell Police chased the vehicle – which had been reported stolen – during the night shift and said they would be requesting a felony warrant for fleeing. Police pursued the driver down U.S. 71B at speeds up to 110mph, with the driver mainly in the turn lane. A Benton County Sheriff’s Deputy joined the chase at Las Fajitas and continued it once the Lowell Police reached the county line. Eventually, the driver was captured by the Benton County Sheriff’s Office with the help of the Air One helicopter and several law enforcement agencies. Reyes is now being held in the Benton County Detention Center on an additional $80,000 bond in addition to his previous bond, for a total of $150,000 bond. (https://bit.ly/2HHBrWa)
THESE THREE THINGS!

What do these 3 things have in common:
A BOY SCOUT—A FRATERNITY—A TELETHON
(They have or take PLEDGES)