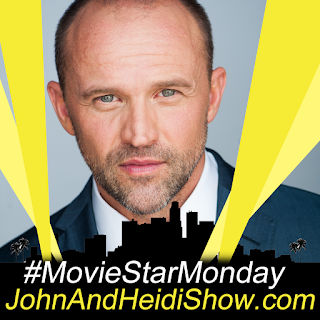 It's a #MovieStarMonday with actor Cory Tucker("Transformers 3: Dark Side of the Moon,"NCIS," "True Blood") about a recent project with Facebook and James Patterson that Blurs the lines of fiction & reality! The world's bestselling author James Patterson cast actor Cory Tucker in the lead role of Detective 'Caleb Rooney' for the new fictional thriller, "The Chef," which features a first of its kind multimedia interactive-fiction experience, available exclusively on Facebook Messenger. You simply hit "send message" on the Facebook page for The Chef by James Patterson to get started, then click the knife icon to continue reading.
https://www.facebook.com/The-Chef-by-James-Patterson-244481802931386/

Tucker will next be seen co-starring in Apple's upcoming American drama web television series "The Morning Show," along with Reese Witherspoon, Jennifer Aniston, Steve Carell, and Billy Crudup, as well as a starring role as "Chareles" in the action / sci-fi / thriller sequel, "The Agent II."

Cory Tucker's social media links are on his site at corytucker.net

Officials have confirmed that a Detroit police officer attended a Michigan State Police training class with alcohol in his system. WXYZ-TV reported that the training took place Thursday, and Detroit Police Chief told the TV station that an internal investigation would be conducted. An Official told the television station, “The bottom line is that he showed up to work under the influence of alcohol. This was a Michigan State Police training; he blew a .08. Certainly, that’s a problem, it’s a problem for me, and it may be a problem on how it was handled after that.” State police Lt. Mike Shaw told the Detroit Free Press the officer was attending a DataMaster training class. A DataMaster is an instrument used to analyze blood alcohol concentration via a breath sample. During that class he volunteered to give a sample and it was determined he had alcohol in his system. A Detroit police spokesperson confirmed Saturday morning that an internal investigation is underway, but did not share more information about the officer or the incident. (https://bit.ly/2D3oSkZ)

CBS News Staffers are said to be scared that the network can’t afford Gayle King. (https://pge.sx/2Igo9AX)
Madonna is on the verge of releasing a new album that includes songs by her alter ego, Madame X. (https://bit.ly/2ZfjMv5)

Ryan O’Neal is said to be “quietly shopping” a portrait of his ex, Farrah Fawcett, for $18 million dollars. The portrait was taken by Andy Warhol. (https://pge.sx/2Xf3Hno)

SCOOP OF THE DAY: Brought to you by BetterCreditCards.net
Mars-Wrigley is offering a summer internship program that comes with free candy for one year. Some people are debating the health merits of this and other people are mad that they’re not paying money. (https://bit.ly/2IzlZvE)

A group of bystanders rescued a blind man who fell onto the subway tracks in Washington, D.C. just seconds before the train arrived. (https://nyp.st/2GcXNfO)

Tickets for New York City’s Tribeca Film Festival are selling for as much as $25,000.(https://on.wsj.com/2V1HHPw)

Scientists in Israel have printed the first ever 3-D heart. True story. If you need a heart transplant now they’ll be able to make you one.(https://bit.ly/2IyR8iY)

A group of workers on an oil rig rescued a female dog who was swimming 135 miles off shore in the Gulf of Thailand. Some people are saying the dog was a passenger on a different boat and fell overboard. (https://dailym.ai/2VKySqB)

One of the Nigerian Brothers involved in the Jussie Smollett attack has won Chicago’s Golden Gloves Boxing Tournament. (https://pge.sx/2V1fMzh)

Tiger Woods’ win at The Masters is being referred to as the greatest comeback in sports history.(https://bit.ly/2V1lvVC)
President will give Tiger Woods the Presidential Medal Of Freedom at the White House. (https://bit.ly/2v9aX8A)
A Wisconsin Day Trader won $1.2 million dollars by betting Tiger Woods to win The Masters. (https://bit.ly/2InZgU4)
FUN FACT FOR YOU:
Share this with your friends... they'll think you're really smart!
Sir Edmund was the first to climb Mt. Everest and return back.

Belonephobia… Fear of pins and needles.


WEIRD NEWS: Brought to you by WeirdGiftOfTheDay.com
A New York woman who told police she is “deathly afraid” of spiders crashed her car Wednesday after spotting one next to her as she was driving. Cairo Police report the accident happened on Silver Spur Road when the 54-year-old motorist who was out running errands panicked upon noticing the spider. She veered off the road and crashed into a stone wall. A Cairo Police Facebook post shows the woman’s car with front end damage so severe that the car is a total loss, KWQC has learned. Police say the driver was taken to the hospital by ambulance for a leg injury. The Cairo Police post states, “We know that it is easier for some drivers than others but PLEASE, try to teach new drivers and yourselves to overcome the fear and pull over to a safe place.” (https://bit.ly/2KEtBzO)

A Pennsylvania woman who wound up on a local police department’s “Top Ten Most Wanted List” was busted this week after she taunted cops in a Facebook post about her being on the lam, authorities said this week. Chloe Jones implicated herself when she commented on the “wanted” post by the Greene County Sheriff’s Office, writing, “Do you guys do pick up or delivery??” with four crying-laughing emojis. Jones then got into an argument with other commenters on the post and claimed that she was at a hospital in Morgantown, West Virginia. On Monday, cops in West Virginia were able to track down Jones, who was extradited to Pennsylvania. The Greene County Sheriff’s Office thanked citizens of Greene County, Monongalia County “and many others for your tips that lead to Jones’ arrest.” It was not immediately known what Jones had originally been wanted for, but she didn’t seem too fazed by her arrest: She smiled in her mugshot. (https://nyp.st/2VJCmJS)
THESE THREE THINGS!

What do these 3 things have in common?
The Model-A Ford is unveiled, The Holland Tunnel opens and Charles Lindbergh solos across the Atlantic
(They all happened in 1927)

https://www.sunnyskyz.com/good-news/3271/Kentucky-Toddler-Beats-Stage-4-Cancer
Awesome story! Please feel free to share YOUR good News too!
Also, consider joining John & Heidi at 80s In The Desert on
May 3rd & 4th in Las Vegas – www.RadioTravelGroup.com
(Use promo code RADIO to save $25 per ticket)