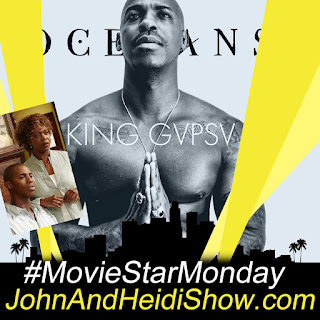 It's a #MovieStarMonday with actor Mehcad Brooks, best known for Desperate Housewives, The Game and Necessary Roughness. He's currently starring on DC Comic’s superhero action-adventure series “Supergirl” on The CW opposite Melissa Benoist. Mehcad starred in the Tyler Perry film “Nobody’s Fool” with Tiffany Haddish and Whoopi Goldberg. In addition to his movie and TV career, he is also a musician under the name KING GVPSV. He has a new single,“Oceans.” AVAILABLE NOW - https://amzn.to/2L3ForC

A Pew Research survey found that 10% of Americans do not use the internet.
(https://pewrsr.ch/2IDokGA)

An Ohio man wearing a Batman cap and shirt was arrested Thursday afternoon after he was seen planting prescription medication on the grounds of the Butler County Jail. 45-year-old William Tackett was arrested for illegal conveyance of drugs of abuse onto the grounds of detention facility, a third-degree felony. Tackett is being held in the Butler County Jail under a $20,066 bond. No court date has been scheduled for him. Butler County Sheriff Richard K. Jones said the drugs were being placed there for 38-year-old inmate Anessa Henson, who is in jail on a capias warrant. The corrections staff was able to intercept the illegal transaction, and both subjects were charged with felony illegal conveyance. (https://bit.ly/2VYAey7)

BIG SCREEN-LITTLE SCREEN: Brought to you by ChannelSurferTV.com
“Avengers: End Game” is doing incredibly well in China and is on pace to rack up a half a billion dollars. (https://bit.ly/2PwhZxt)

The cast of “Empire” has told producers of the show to bring back Jussie Smollett next season “or else.” (https://bit.ly/2GFSZkB)

Netflix is struggling financially to keep re-runs of “Friends” and “The Office” because Hollywood Studios are getting into streaming and want their content back. (https://on.wsj.com/2W3u6EB)

SCOOP OF THE DAY: Brought to you by BetterCreditCards.net
Over 300 teenagers got into a massive brawl at the “Worlds of Fun” Amusement Park in Kansas City, Missouri.Police say it’s a miracle no bystanders were hurt.
(https://bit.ly/2vjnfLI)

An international group of scientists are warning that a Chinese experiment where Human DNA was mixed with monkeys could have disastrous consequences. (https://bit.ly/2PiGNcf)

Amazon is closing its online store in China next month because of the difficulties of doing business in the communist nation. (https://nyp.st/2Gvcbjt)


A study at UCLA found that students and faculty have an elevated chance of catching the measles because of the large percentage of unvaccinated students on campus. (https://bit.ly/2Zp0X8W)

Three million people have watched video of a runaway donkey that brought traffic to a standstill after it ran onto I-90 in Chicago. (https://bit.ly/2UXMZwb)
Louisiana State Police arrested a man who broke into the governor’s mansion and fell asleep on the couch. (https://bit.ly/2IyK3Qh)

A new report claims that Facebook and Google have been sharing user data on their mental health apps. (https://bit.ly/2vjhkWJ)

NASA is warning that the “Beauty And The Beast Aurora” could release a solar flash that damages communications systems on earth. (https://bit.ly/2L6HS8u)

Walmart is experimenting with artificial intelligence that monitors the store and tells employees when to restock shelves. (https://bit.ly/2IVQr3l)
FUN FACT FOR YOU:
Share this with your friends... they'll think you're really smart!
Foreign Accent Syndrome Is a Thing
This speech disorder, which can occur after traumatic brain injury or stroke, is when a person’s way of speaking shifts from a native accent to a foreign one. Among the cases identified are American English to British English, Japanese to Korean, British English to French, and Spanish to Hungarian.


WEIRD NEWS: Brought to you by WeirdGiftOfTheDay.com
Some neighborhood arguments get more out of hand than others. The spat in New Port Richey, Florida over the weekend resulted in bloodshed. One man needed six staples to close a wound on the back of his head and another man got locked up once deputies from the Pasco County Sheriff’s Office arrived. 51-year-old Gerald Lee Thornton Jr. is charged with aggravated battery after attacking neighbors with a frying pan and a lamp pole, deputies told the Bradenton Herald. His arrest record indicates he’s being held at the Land O’Lakes Jail on a $10,000 bond. Deputies said one neighbor told them Thornton chased him with a frying pan, eventually catching up and striking him in the left side with it. That man managed to wrestle the cookware away, and even landed enough punches to the suspect’s head to knock him down. Investigators said when Thornton got back up, he used a lamp pole to open a gash on the back of another neighbor’s head. (https://bit.ly/2Vehldr)

Authorities say a Florida man ignited a homemade pipe bomb that flew into his neighbor's yard and shared a video of the outcome on Facebook. The Volusia County Sheriff's Office said in a Sunday news release 25-year-old Christopher Green is facing a charge of making a destructive device. Nobody was injured but houses in the Orange City, Florida neighborhood were evacuated. Green told deputies he used stump remover mixed with sugar to make smoke bombs. He posted the Facebook video before the arrest, writing he didn't expect that thrust. The neighbor heard a loud hissing noise when she saw the metal pipe flying into her yard Saturday. Green later wrote on Facebook “I went to jail for this. Could be facing up to 10 years. Hope they take it easy.”
(https://bit.ly/2vhjrdG)

What do these 3 things have in common:
SILVER—REDD—20TH CENTURY
(They are all followed by Fox or Foxx)