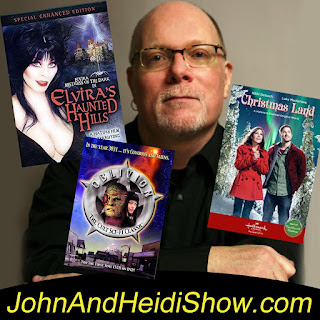 Sam Irvin is a veteran film and television director, producer, screenwriter, author, journalist and educator. After beginning his career as the assistant to Brian De Palma on "Dressed to Kill," Irvin has directed many of hos own movies, including "Guilty as Charged", "Acting on Impulse", "Kiss of a Stranger" for which he also wrote the original screenplay and many more. Irvin has also produced a dozen additional films, including co executive producing Bill Condon's Academy Award winning motion picture, "Gods and Monsters"
https://www.imdb.com/name/nm0006787/?ref_=fn_al_nm_1

A survey by the Honest Kids beverage company found that 9 out of 10 kids don’t know that bananas and strawberries grow on trees. (https://bit.ly/2v7F683)

A Pennsylvania man who was high on bath salts when he opened fire on fireflies that he mistook for “green laser lights” has been sentenced to a maximum of six years in prison following a plea deal with prosecutors. 31-year-old Jesse Shields was arrested last June after he and his girlfriend broke into a Clinton County residence. Claiming to have been attacked, Shields said “there was something on his skin that was burning” and asked the homeowner if he could use the shower. After disarming Shields, the homeowner allowed the intruder to use the bathroom. When cops arrived at the residence, Shields and 23-year-old Katherine McCloskey were taken into custody. McCloskey told police that she and Shields “started seeing a lot of green lights that are similar to fireflies, but they were not fire flies because they were blinking twice.” Shields, she added, grabbed her father’s handgun and “fired the gun to scare whoever was messing with them.” (https://bit.ly/2va2Okc)

The cast of “Saved By The Bell” reunited in California on Saturday to celebrate the show’s 30th Anniversary. (https://pge.sx/2W0Rgf0)

Jussie Smollett’s brother says the actor is suffering from “night terrors” that wake him up in his sleep. (https://pge.sx/2VkYTQi)
SCOOP OF THE DAY: Brought to you by BetterCreditCards.net
Kanye West is selling $50 church socks at Coachella. He’s the only one selling church stuff.(https://bit.ly/2PoBkAL)
Madonna’s new single “Medellin” flopped on the charts and is sitting at number 43 on iTunes.(https://bit.ly/2IK0YOV)

Four Loco has released a hemp flavored malt beverage in honor of 4/20. There isn’t any marijuana in it, but each can is twelve percent booze.
(https://bit.ly/2XwtPKU)

A report out of Buckingham Palace says the Royal Family is trying to keep Meghan Markle as far away as possible because of her constant craving for media attention. (https://pge.sx/2Vf0I13)

Adele has officially separated from her husband Simon Konecki.
(https://pge.sx/2GqRhlO)

The “on sale” date for tickets to Woodstock’s 50th Anniversary Concert has been postponed indefinitely while promoters work to secure a permit for the site.
(https://bit.ly/2XALzEN)

The memoir Prince was working on at the time of his death is due out in October.(https://bit.ly/2GqPg9h)

Prince Harry and Meghan Markle may spend four months in Africa after their baby is born.(https://pge.sx/2KTy5m2)

Cardi B wore an outfit to her assault trial that cost over $15,000 dollars.
(https://pge.sx/2ZquNKh)

The Playboy Club in New York City has been forced to fire half of the bunnies on its staff because of poor service. (https://pge.sx/2IB71pJ)

FUN FACT FOR YOU:
Share this with your friends... they'll think you're really smart!
World War I Boosted the Bra Market
The market for bras jumped in 1917, during the First World War, when the U.S. War Industries Board asked American women to forgo their corsets (which required significant amounts of metal to construct) and switch to the less-demanding bra. The ladies did their part for the cause, freeing up 28,000 tons of metal and changing female fashion from that moment forward.

WEIRD NEWS: Brought to you by WeirdGiftOfTheDay.com
Coaches believe Little League baseball parks should be one of the places thieves consider off limits. But a little after midnight last Wednesday somebody broke into the concession stand at the Wheelersburg Little League in Ohio. Coach Jon Estep said, “I thought this would've been one of the places that should've been hands off. It’s very frustrating.” More than $10,000 worth of food and property were stolen -- everything from a PA system to crock pots to Big League Chew -- even first aid kits. Deputies say they identified the suspects, Burt and Jessica Copley, thanks to security video and DNA evidence. They added that they found the couple and eight truckloads of stolen property at their home in Franklin Furnace on Saturday. Among the stolen items from the concession stand were 1,200 hot dogs. For the Little League, it was little consolation they got the stolen food back. The president of the league says they had to throw it all out because of health concerns. (https://bit.ly/2GlPXjZ)

A New Port Richey teen was arrested after cracking an egg over his mother’s head as part of a social media “challenge,” leading to a fight between mother and son. According to the complaint affidavit, after getting 300 comments on a Facebook “egg challenge” on Wednesday night, 18-year-old Michael Corley said he would egg his mother. He reportedly proceeded to crack an egg over her head. Pasco County Sheriff’s Office deputies noted Corley’s mother slapped her son across the back of the head. According to the affidavit, Corley allegedly grabbed her shirt and threw her into the dining room table. Corley was taken to the Land O’ Lakes jail and faces a charge of domestic battery.(https://bit.ly/2PpuCds)
THESE THREE THINGS!

What do these 3 things have in common:
BULL—PIG—QUILL
(They are all types of Pens)

Shelter Dog Who Loves His Bowl Gets Adopted After His Story Goes Viralhttps://www.sunnyskyz.com/good-news