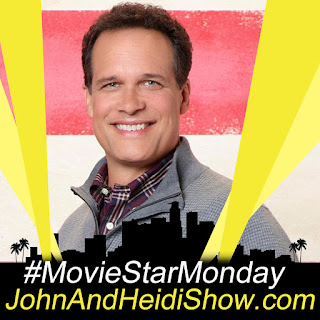 It's a #MovieStarMonday with Diedrich Bader. Known for hundreds of projects like “The Drew Carey Show,” “The Beverly Hillbillies,” “Napoleon Dynamite,” “Office Space”, NBC’s “Outsourced,” "Miss Congeniality 2," "Balls of Fury," and "Meet the Spartans" and many more. He is currently on THREE different hit TV shows. “American Housewife” Tuesdays 8/7CT on ABC, “Better Things” Thursdays at 10pm on FX and “Veep” on HBO (final season just started on March 31)

A new study found that just thinking about coffee can raise your awareness and attention. (https://bit.ly/2UbvjNo)

Tulsa police arrested a woman after she was allegedly driving drunk on a rim of her vehicle. According to Tulsa police, officers were conducting a traffic stop when they spotted a driver driving on a rim. Police say they quickly ended the original traffic stop and pulled over the driver, which they say they could “hear her coming from a block away.” Officers asked the woman, later identified as Amy Dillon, how much she had to drink in which she replied that she’d had two tequila shots. Police say “she could barely stand upright” and did not do well on a field sobriety test. Police say they also found a full margarita inside her cup holder. Officials say it is unknown how she wrecked her car on something or what it was. Authorities took Dillon to jail where took a breathalyzer test and blew a .21 and “climbing.” She was arrested on complaints of no driver’s license in possession while driving, transporting an open container, operating a motor vehicle with defective tires, and DUI second offense.
(https://bit.ly/2I3SBxf)

Audiences were said to be TERRIFIED by the first footage from the sequel to “IT” that debuted at Cinemacon this week. (https://bit.ly/2JYANWY)
Oreos has partnered with “Game of Thrones” to create a cookie in honor of the show’s final season. (https://cnet.co/2TTUKxO)

Sheri Shepherd says she cried every day on “The View” because Barbara Walters was so hard on her. (https://pge.sx/2CXxmdk)

SCOOP OF THE DAY: Brought to you by BetterCreditCards.net
Ariana Grande’s new song “Monopoly” has people wondering about her sexuality because of the line “I like women and men. Yeah.”
(https://pge.sx/2FOpThh)

A study by Ohio State University found that people who use multiple media devices a day have a higher chance of being obese because jumping from device to device leads to a lack of will-power. (https://bit.ly/2UgMGfw)

The State of Illinois has banned Sony’s robotic dog, Aibo, because it collects face scans, which is against the law. Aibo is a $2,900 robotic dog.
(https://cnet.co/2CQB7RM)

A single engine plane was forced to make an emergency landing on a California freeway after it lost power. (https://bit.ly/2I7oipm)

Millions of people in Venezuela are without clean drinking water as their crisis deepens. (https://yhoo.it/2TQEnC1)

A group of naked protestors stormed Parliament to protest the Brexit plan. That headline is misleading because they claim they were protesting Teresa May AND Brexit. (https://bit.ly/2K6RTSz)

An Argentinian company has developed a consent condom, that can only be opened by two people because it requires four hands pressing down at once.
(https://bit.ly/2TROkzj)

FUN FACT FOR YOU:
Share this with your friends... they'll think you're really smart!
The World’s Eight Richest People Have the Same Wealth as the World’s Poorest 50%. You are familiar with the idea that the rich are getting richer and the poor are getting poorer, but you probably didn’t realize how stark things had gotten. According to a report from Oxfam, the eight richest people in the world (a list topped by Microsoft Founder Bill Gates) have riches equivalent to 3.6 billion people.

WEIRD NEWS: Brought to you by WeirdGiftOfTheDay.com
Baltimore’s mayor will take an indefinite leave from office after news emerged that she secured a lucrative sales deal with the University of Maryland Medical System for a kids book series she wrote — while she sat on its board. Mayor Catherine Pugh announced Monday she will step away from the job as she faced intensifying backlash for netting more than $500,000 from the sale of the books, secured with a no-contract bid arrangement with the institution. While a UMMS board member, Pugh cashed checks from book sales as part of a deal made in 2011 with the medical system to distribute her self-published “Healthy Holly” illustrated series to Baltimore schoolchildren. The Democrat — who became mayor in 2016 — called the deal a regrettable mistake last week in a news conference. She recently returned $100,000 to the medical system and resigned from the board, which she served on for nearly two decades.
(https://nyp.st/2FVheLd)
MOMENT OF DUH: Brought to you by FunkyMonkeyShirts.com

Her lavish excursions were plastered all over social media, showing her with Louis Vuitton bags and Lamborghinis and crisscrossing the globe from Ibiza to Milan as a Miami-based influencer. But according to reports, 26-year-old Jenny Ambuila’s whirlwind lifestyle was put on hold Friday when she was busted during a Colombian vacation in connection with an overseas money-laundering scheme. The University of Miami graduate faces money-laundering charges after investigators say they uncovered a massive web of corruption at the Colombian port of Buenaventura, where her father was employed as a customs officer. Her father, Omar Ambuila, is accused of pocketing more than a million dollars in bribes to allow untaxed goods into the country. Some of the embezzled funds reportedly were used to pay for his daughter’s college tuition at the University of Miami, where she posted on Instagram about the college campus with the caption “#richkids.” (https://nyp.st/2FR2bRh)
THESE THREE THINGS!

What do these 3 things have in common:
FOG—A JACK—A BODY BUILDER
(They lift)

Todd Palmer is a teacher in South Dakota. His daughter plays for SDSU.He was going to miss her big chance to play in the Sweet 16. But his coworkers weren't about to let that happen. They chipped in “vacation time” and money to help make sure he was there to see the game. Sadly her team did not win, but THIS ACT was a huge win for this family and the community they live in.
Awesome story! Please feel free to share YOUR good News too!
Also, consider joining John & Heidi at 80s In The Desert on
May 3rd & 4th in Las Vegas – www.RadioTravelGroup.com
(Use promo code RADIO to save $25 per ticket)