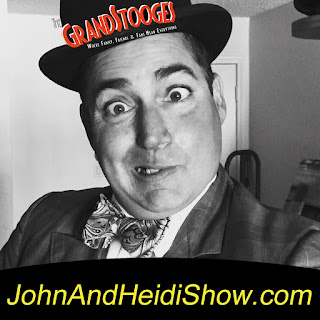 Today we visit with Curly G. He is the real life grandson of Curly Howard from the Three Stooges. He and his siblings are now the GrandStooges! They have a fun website celebrating their grandfather and everything STOOGE! He has also put together a LIVE STAGE SHOW that recreates some of the most famous Three Stooge shorts live and in person!https://www.facebook.com/CurlysGrandson/
http://thegrandstooges.com/

A British study found that dubstep music can be used as mosquito repellent because the sounds drives the bugs away. (https://bit.ly/2WCjwV0)
BRAIN ON DRUGS:
Brought to you by TimeForRehab.com! Each day we talk about people doing dumb things under the influence, but addiction is no laughing matter… if you or someone you know needs help, we're here to help! You can learn more at TimeForRehab.com.

According to an arrest report, in an apparent bid to mask the odor of booze on his breath, a suspected drunk driver “was spraying Axe body spray in his mouth” when approached by a South Carolina cop. A car driven by 49-year-old Efren Mencia-Ramirez was pulled over Saturday afternoon when a Spartanburg County Sheriff’s Office deputy spotted the vehicle speeding and swerving. Upon approaching the car, the deputy noticed that Mencia-Ramirez and his passenger were surrounded by empty Corona Extra beer cans. Mencia-Ramirez was also “spraying Axe body spray in his mouth...to cover the smell of alcohol on his breath.” Mencia-Ramirez, who reeked of booze, was arrested after failing a series of field sobriety tests. His blood alcohol content was registered at nearly twice the legal limit. He was charged with drunk driving, driving without a license, driving without insurance, and carrying an open container of alcohol.
(https://bit.ly/2Otpk02)

Kim Kardashian told Jimmy Kimmel that she picks out baby names by letting the whole family weigh in and then waiting three or four days after the baby is born to figure out what it looks like. (https://pge.sx/2OJT8WI)

The Discovery Channel is going to air a special this Sunday called “Expedition Unknown” in which they open the tomb of an Egyptian mummy on live TV. Discovery has raised $10 million to show this Egyptian mummy. (https://bit.ly/2UsfBfX)

SCOOP OF THE DAY: Brought to you by BetterCreditCards.net
A Chinese prison has installed artificial intelligence monitors in every cell to make escaping impossible. (https://bit.ly/2FPOnI4)

Toyota has unveiled a basketball playing robot in Tokyo that can shoot three pointers with startling accuracy. The six foot ten inch robot is considered the top artificial intelligence athlete in the world. (https://bit.ly/2UvgSDj)
Magician David Blaine is being investigated by the NYPD for making unwanted sexual advances against two women. (https://bit.ly/2TQ3rt1)

The Secret Service confirmed the arrest of a Chinese woman who was carrying malware at Mar-a-Lago last weekend. (https://bit.ly/2HVUU6y)

The newest yoga craze sweeping the country is called “Lemoga,” which is a yoga class where lemurs walk around while everyone’s posing. First there was goat yoga, then there was dog yoga, now we’ve got lemur yoga.
(https://bit.ly/2OIDAST)

FUN FACT FOR YOU:
Share this with your friends... they'll think you're really smart!
Twister Used to Be Seen as Scandalous. That multicolored contortion game of Twister has come to seem like innocent, nostalgic fun, but it wasn’t always that way. When first released in 1966, it was deemed “too risqué” for the Sears catalog, and was dubbed “sex in a box” by critics.
NOW FEAR THIS.... FUN WITH PHOBIAS!

Triskadekaphobia… Fear of the number 13.

WEIRD NEWS: Brought to you by WeirdGiftOfTheDay.com
A camera caught a man apparently stealing underwear during a recent open house in San Mateo, California. Police are searching for the man, who is currently a person of interest in the theft case, and seek help identifying him. Police said in a statement, “surveillance video from the homeowner shows a man being greeted by a realtor inside the home, then walking around the house "with a noticeable bulge around his abdomen that wasn't there when he initially walked inside the home.” The homeowner, who did not want to be identified, said he put surveillance cameras inside to monitor the foot traffic. When his wife told him she was missing a few things, he took a closer look. Upon further review, the homeowner believes the man stole all of his wife's push-up bras. The homeowner said he is sharing his story to help other sellers, who should contact their realtor about not letting potential buyers roam through their home alone.
(https://bit.ly/2FMMH1S)
MOMENT OF DUH: Brought to you by FunkyMonkeyShirts.com

You may want to think twice before using an on-demand food delivery service, especially if you order something as delicious as a milkshake. A California family received a disgusting surprise when their doorbell camera caught a DoorDash driver taking a sip of a milkshake before delivering the order. KTXL reports the Malhotra family is upset after 14-year-old Rishab drank the entire cookies and cream milkshake, and then saw what happened on the video the next morning. Rishab said, “Then my dad told me to check out the video from last night and once I checked it out I brushed five, six times. I felt really disgusted.” The family reported the incident to DoorDash along with a copy of the video, but have yet to hear back from the company two weeks later. (https://bit.ly/2WCITWW)
THESE THREE THINGS!

What do these 3 things have in common:
TIMES—TRIBUNE—POST
(Newspapers)
Awesome story! Please feel free to share YOUR good News too!
Also, consider joining John & Heidi at 80s In The Desert on
May 3rd & 4th in Las Vegas – www.RadioTravelGroup.com
(Use promo code RADIO to save $25 per ticket)