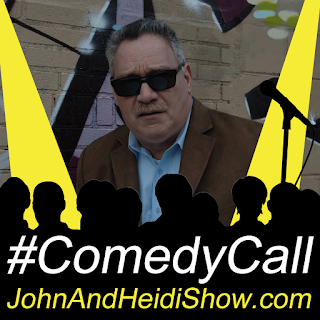 Today we talk with Allan Gitlin... The G Man.... Actor, Stand Up Comedian, Sit Down Comedian,he also does Voice Overs and Voice Unders! Allan is the Extra Extraordinaire! Learn more about The G Man at https://theg-man.net/

A study in the Journal of Psychology found that the brain damage from being drunk lasts up to six months after you quit drinking.(https://nyp.st/2WPz1Jp)
BRAIN ON DRUGS:
Brought to you by TimeForRehab.com! Each day we talk about people doing dumb things under the influence, but addiction is no laughing matter… if you or someone you know needs help, we're here to help! You can learn more at TimeForRehab.com.

An Illinois man was arrested at a strip club on Friday, March 29th, when police say he refused to pay what he owed. Police were called to Big Al’s Speakeasy at 11:40 p.m. when the man refused to pay $25 for unknown services. The patron tried to run when officers arrived, but police were able to catch and detain him. The report states that as the man was escorted to a squad car, an officer read him his Miranda Rights. The patron commented that he had never had his rights read to him before. “Used to date a stripper with the name Miranda Rights,” the man said. According to the report, the man was intoxicated at the time of arrest. He was taken to Peoria County Jail and charged with assault and theft of labor or services. (https://bit.ly/2CPr6E7)
BIG SCREEN-LITTLE SCREEN: Brought to you by ChannelSurferTV.com

Tom Selleck is writing a memoir about his time in showbiz. You know, Selleck is so respected that people wanted him to get into politics.
(https://pge.sx/2Ut7hNM)

Halsey revealed that she once considered having sex for money when she was a homeless teenager in New York City. (https://yhoo.it/2Uq1I2X)

Singer Camila Cabello has signed on to star in a new Cinderella movie.
(https://pge.sx/2Uu5JDs)

SCOOP OF THE DAY: Brought to you by BetterCreditCards.net
Bob Dylan is opening up a whiskey distillery in Nashville in the fall of 2020 called “Heaven’s Door Distillery.” The Distillery is on the site of the Elm Street Church.
(https://pge.sx/2OZgFmq)

Critics are saying that 71-year-old Steven Tyler brought down the house during Aerosmith’s Debut concert at the MGM Grand in Las Vegas.
(https://bit.ly/2Gfi1Hb)

Las Vegas casinos are trying to sign more rock bands like Aerosmith to residencies in an effort to attract millennials. (https://yhoo.it/2Z2FnXL)The long running British Soap Opera “Coronation Street” is going to feature a black family for the first time in its 59-year history. (https://nyp.st/2IqqPLs)

A shocking new report revealed that African Child Brides are being sold on Facebook. (https://bit.ly/2FSJZH4)

The Dalai Lama has been hospitalized in New Dehli after contracting a chest infection. (https://dailym.ai/2uXPbof)

Astronomers captured the first ever image of a black hole Wednesday by using a network of telescopes positioned around the world. (https://bit.ly/2uYv8G6)
A survey by the U.S. World & News named Austin, Texas as the best place to live in the United States. (https://on.today.com/2GdgwJl)


FUN FACT FOR YOU:
Share this with your friends... they'll think you're really smart!
Thomas Crapper developed the flush toilet. In 1884, he simulated the materials a toilet would normally handle, to create “a super-flush which had completely cleared away: 10 apples, 1 flat sponge, 3 air vessels, Plumbers Smudge coated over the pan, 4 pieces of paper adhering closely to the soiled surface.” A fantastic feat of flushing!

WEIRD NEWS: Brought to you by WeirdGiftOfTheDay.com
The sight of a man wearing a thong was all a Florida homeowner needed to call the Martin County Sheriff's Office last month. Deputies arrested 31-year-old George Blankin on March 12th. An arrest report reviewed by TCPalm said the homeowner saw him building a shed and throwing chairs. The report stated, “The trespasser was wearing a swimsuit and then a thong.” Responding deputies said they found a man on the property who was not wearing a shirt or shorts, and he was covered with sand as if he'd just been at the beach. The man was arrested but refused to identify himself. At the county jail, authorities used fingerprints to confirm Blankin as the suspect. The arrest report read, “He stated he was an artist that makes things from garbage.” Blankin faces charges for giving a false name and obstruction without violence. (https://bit.ly/2U9Lbem)
MOMENT OF DUH: Brought to you by FunkyMonkeyShirts.com

Memphis police say that a man has been arrested after he made a false report about a carjacking on March 24th, 2019. According to the report, officers arrived on the scene at 11:00 a.m. The victim, Joshua Scott, told officers that a man struck him in the face and stole his 2011 Nissan Sentra. On April 2nd, investigators met up with Scott again to discuss the investigation into the report. After Scott provided another statement, investigators determined there were “some inconsistencies.” They confronted Scott with evidence and determined the report was “fabricated.” Scott then admitted that he reported the carjacking to cover up the fact that he gave his vehicle to a friend in exchange for meth. He has been charged with false reporting. (https://bit.ly/2KhoHbF)
THESE THREE THINGS!

What do these 3 things have in common:
MAY—BEAN—FLAG
(Types of POLES)
Mom Charges Cougar And Pries Its Jaws Open To Save Son
https://www.sunnyskyz.com/