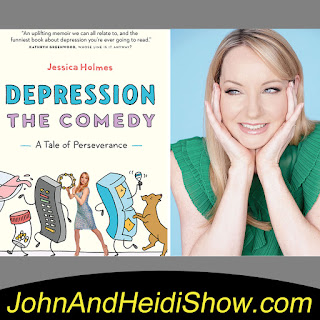 Today we visit with Jessica Holmes, a Canadian comedian and writer best known for her work on the Royal Canadian Air Farce and The Holmes Show. As a stand-up comic, she has opened for Jerry Seinfeld, Ellen DeGeneres, and Russell Peters, as well as icons like Oprah Winfrey and Deepak Chopra. She has a new book called “Depression the Comedy: A Tale of Perseverance” AVAILABLE NOW - https://amzn.to/2WhXD0N

A new study found that working in a nail salon is just as unhealthy as working in an oil refinery. (https://bit.ly/2JQmeTJ)

“Don’t do that,” Audrain County, Missouri Sheriff Matt Oller advised in a news release regarding a woman who drove to jail on a revoked license and walked in with drugs in her possession. 29-year-old Amanda N. Smith was arrested last Wednesday after she drove to the Audrain County Sheriff’s Department with a revoked driver’s license in order to reportedly pay a bond for her boyfriend. She was later found to be in possession of methamphetamine. The department’s exterior camera recorded Smith driving a vehicle into the parking lot. Major James Shrader told Sergeant Brian C. Hollensteiner that Smith’s driver’s license was revoked after multiple convictions of driving while intoxicated and driving while suspended or revoked. During the booking process, Smith was allegedly observed removing an item from her bra and placing it in her pants. Deputies discovered a 2.5-gram plastic bag containing a white crystalline believed to be methamphetamine. Smith was charged with felony driving while revoked or suspended, unlawful possession of drug paraphernalia, and delivery or possession of a controlled substance at a county jail. (https://bit.ly/2Ynn2n4)

BIG SCREEN-LITTLE SCREEN: Brought to you by ChannelSurferTV.com
An eagle-eyed “Game of Thrones” fan discovered a water bottle that was left in a scene during Sunday night’s finale. (https://nyp.st/2JQo6M5)

“Game of Thrones” creator George R.R. Martin told fans he expects to launch several spinoffs in the near future. (https://nyp.st/2JUF6Ba)


SCOOP OF THE DAY: Brought to you by BetterCreditCards.net

Facebook has implemented a “One Strike” policy for live streamers who show violent acts on the site. (https://tmsnrt.rs/2Q55rNL)

“The Bachelorette” premiered with Hannah B. starting off strong by sending home Scott, who allegedly has a girlfriend. In bachelor nation, that means Scott is not there for the right reasons. (https://bit.ly/2JiUSpT)

Britney Spears’ manager says she may never perform again due to complications in her personal life. (https://bit.ly/2VoqImM)

Leonard Bailey, the California surgeon who became famous for performing the first baboon to human heart transplant, has died at the age of 76.
(https://lat.ms/2HpeSFg)

Taylor Swift is being criticized on Twitter after telling Ellen Degeneres that she shaves her legs every day. (https://nyp.st/2HlqdWL)

FUN FACT FOR YOU:
Share this with your friends... they'll think you're really smart!
James Patterson Coined the “Toys R Us Kid” Jingle. Before he got into writing massive-selling thrillers, James Patterson worked for advertising firm J. Walter Thompson, where he is credited with coming up with the jingle “I’m a Toys R Us Kid.” With earworms like that, he worked his way up to creative director in no time.


WEIRD NEWS: Brought to you by WeirdGiftOfTheDay.com
Sometimes, paradise comes with its own hazards. A Key West stripper was jailed after police said she committed an assault with a “deadly weapon” on Duval Street. The weapon: one coconut. 36-year-old Shonta Latasha Bolds, who is listed as a Miami resident, was arrested on a felony charge of aggravated assault with a deadly weapon at about 2:00 a.m. last Saturday. Bolds admitted to police she threw the coconut at George Exposito, but only because he was videotaping her sitting on the porch of the VIP Gentlemen’s Club. Police said that she shouted obscenities at him as he walked by filming her. Then she hurled a coconut at him. Police said that the video didn’t capture the coconut throw, but it did show a coconut wobbling on the sidewalk “as if it had just been thrown.” Entertainers at the VIP club have been known to get angry at passersby who snap photos of them. (https://hrld.us/2WIaplX)

A New Jersey man was arrested after police say a video appeared on social media appearing to show the suspect urinating on an unoccupied Newark police SUV -- while a crowd cheered him on. 22-year-old Tauqeer Boyd, the man allegedly seen in the video shot Saturday night, appeared to relieve himself on the marked police vehicle parked outside the CityPlex 12 movie theater. Boyd was arrested at his home just hours after citizens alerted police to the video. Newark Public Safety Director Anthony F. Ambrose said, “We absolutely will not tolerate disrespect of our police. We take this as a personal insult. When our department became aware of this, we moved quickly to apprehend the suspect.” Police said that Boyd was charged with lewdness, criminal mischief and disorderly conduct. The West Orange native was previously arrested in October for burglarizing a police cruiser parked outside Hoboken Police headquarters.
(https://fxn.ws/2WvwX9E)
THESE THREE THINGS!

What do these 3 things have in common:
CATHY RIGBY—ROBIN WILLIAMS—SANDY DUNCAN
(They have all portrayed Peter Pan)

He Helped Save Her Daughter. Two Years Later, She Returned The Favorhttps://www.sunnyskyz.com