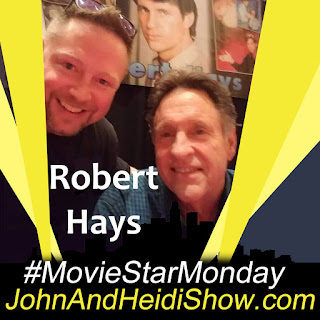 It's a #MovieStarMonday with Actor Robert Hays. He played Striker in the movie Airplane amongst many other amazing roles. We caught up with him ans several more guests you'll hear from over the next month or so at 80s In The Desert in Las Vegas. Get more information on Robert Hays at https://www.imdb.com/name/nm0001332/

A Bloomberg Survey found that people over the age of 65 are no longer retiring as often as they used to. (https://bloom.bg/2Y2bNA9)

Hey, don’t tell this Key West couple that romance is dead. A homeless man was arrested Monday night after police said he was having drunken sex with a woman on the sidewalk in a rather conspicuous place: outside the Key West Police Department. It all started at about 9:00 p.m. Monday, when a woman walked up to the dispatch window at the station to report that two people looked like they were about to have sex on the sidewalk. Officer Brian Leahy responded and said he caught 46-year-old Gary Hill with his pants down and having sex while lying on the sidewalk by a concrete barrier that borders the pond outside the police station. Police said that the woman was so intoxicated that they had to take her to the hospital. Hill was jailed on a misdemeanor charge of indecent exposure and remained at the Stock Island Detention Center Tuesday morning without bond. (https://hrld.us/2IV1ryQ)

Fox says that Jussie Smollett will not appear in the new season of “Empire.”
(https://pge.sx/2GVVyz0)

Joy Behar stunned “The View” panel when she said that she is writing an “S&M type thing.”(https://dcdr.me/2ISQjlK)

Marie Osmond is taking over for Sara Gilbert on “The Talk.”
(https://bit.ly/2vtKeUn)

Shark Tank’s Barbara Corcoran celebrated her 70th birthday by hosting her own “funeral” in which she arrived in a coffin. (https://pge.sx/2V6NlAN)

SCOOP OF THE DAY: Brought to you by BetterCreditCards.net
ESPN the Magazine is going to stop publishing its print edition in September.
(https://bit.ly/2vuQIlS)

The MTV Video Music Awards are being moved to Newark, New Jersey this year. (https://bit.ly/2V1lWjL)

Bryan Adams and Billy Idol are joining forces for a summer tour.
(https://bit.ly/2DGkLLM)

A doctor in China discovered why his patient was experiencing severe ear pain: a spider was building a nest.

A guy in Durham, North Carolina, has reached quite a significant milestone in the life of his car. Dexter Mills’ 2000 Honda Accord has been driven one million miles. Mills is a self-employed vehicle inspector who travels across the state to various shops and dealerships. He estimates he logs about 65,000 miles a year. These days, it’s his car getting all the attention. The Accord became his primary work vehicle in 2006 after his wife purchased a new car.

A study (University of Warwick) found that shy and introverted people are the hardest people to help when it comes to giving up smoking. Researchers think it’s because shy smokers feel they need a cigarette to help them get comfortable in social encounters.

In Germany, a man caused about $3,000 worth of damage when he tried to use a vacuum cleaner to siphon gas out of his car. The man had mistakenly filled his tank with unleaded instead of diesel and stuck the vacuum hose in the tank to get the gasoline. The fumes exploded inside the vacuum cleaner.

A Florida school resource officer accidentally set off his gun in the cafeteria Tuesday when he leaned against a wall. No students were hurt when the officer’s Sig Sauer 9 mm went off near the lunch line at Weightman Middle School. The round hit the floor and ricocheted into the brick wall behind the officer, who wasn’t identified publicly. The weapon was in the officer’s holster at the time of the incident. Authorities have since placed the officer on administrative leave while they investigate. A Pasco County Sheriff’s Lieutenant said the officer was wearing a bodycam, but it wasn’t turned on. He added that Investigators will look for surveillance video. (https://nyp.st/2XY6RMI)


FUN FACT FOR YOU:
Share this with your friends... they'll think you're really smart!
Fear of Young People is Known as “Ephebiphobia”. This seems like a silly condition, but according to sociologists and psychologists, it’s surprisingly widespread and can show itself in a wide range of ways, from the “in my day…” tut-tutting about teenagers’ behavior to restricting our own children’s activities. It is also a condition long-experienced by society’s adults. One professor studying the subject points to a quote from Plato: “What is happening to our young people? They disrespect their elders, they disobey their parents. They ignore the law. They riot in the streets, inflamed with wild notions. Their morals are decaying. What is to become of them?”


WEIRD NEWS: Brought to you by WeirdGiftOfTheDay.com
According to an arrest report, a man who stuffed a large Angus beef rib roast worth $62 down the front of his pants at a Florida supermarket had his alleged meat heist spoiled by an alert store employee. Cops say that 40-year-old Eric Worden jammed a seven-pound rib roast into his pants and then sought to exit a Publix supermarket in Parrish, a Tampa suburb. But Worden’s rib bid late last month was thwarted by a Publix manager who approached the accused thief to “challenge him about the roast concealed in his pants.” “Alright, you got me,” Worden reportedly declared as he “removed the roast before fleeing out the exit doors” around 8:30 a.m. He was subsequently apprehended in the shopping plaza where Publix is located. Worden was charged with misdemeanor theft and booked into the county jail. Now free on $500 bond, Worden has pleaded not guilty to the misdemeanor count. Worden has a lengthy rap sheet, which includes time in state prison for burglary. (https://bit.ly/2IVlZHa)

Two people are accused of going to the DeSoto County, Florida Jail and pretending to be detectives in an attempt to get their friend released Deputies in DeSoto County say Monday night two people, 22-year-old Francine Olson and 24-year-old Brandon Reyes, went to the sheriff's office and buzzed the jail entrance intercom. They reportedly told the staff that they were “new detectives” in an apparent attempt to spring their “partner,” 40-year-old George Chanza, out of jail. Chanza was arrested on April 26th for an outstanding warrant. But the ruse failed and deputies arrested Olson and Reyes, charging both with third degree felony False Personation of a Law Enforcement Officer. Deputies say though the pair didn’t manage to get their friend out of jail, they were able to unite them with Chanza behind bars. (https://bit.ly/2IVsz0A)
THESE THREE THINGS!

What do these 3 things have in common:
RACK—SCREWS—IRON MAIDEN
(They are all Instruments of Torture)