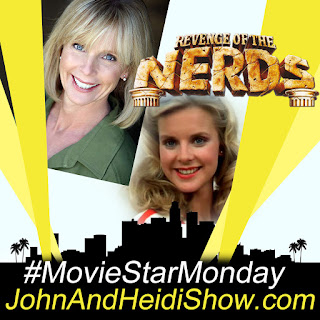 It's a #MovieStarMonday with Julia Montgomery, most known for her role as Betty Childs from Revenge Of The Nerds, but she was also in many other films. We met up with her at 80s In The Desert. She will also be at 80s In The Sand again as well. (www.RadioTravelGroup.com) Here is a link to her website with more information about this wonderful lady! http://juliamontgomeryactress.com/

A new survey found that parents think young children should start focusing on their career choice by the age of five. (https://bit.ly/2wfmEes)

A Wyoming man told police that he traveled back in time from the future and had come to warn Casper about a pending alien invasion Police responded to a call about a man claiming to be from the future at around 10:30 p.m. local time and found 27-year-old Bryant Johnson. Casper Police said in an affidavit that he appeared to be under the influence. When he spoke to police, Johnson said he was actually from the year 2048, claiming an alien invasion would take place next year. He told residents to leave as soon as possible, and demanded to talk to “the president” of the town and would talk to no one else. Officials quoted Johnson as saying that he was able to time travel with the help of aliens. The officials also recalled him saying that he had to stand on a pad and that the aliens filled his body with alcohol, but that they had sent him to the wrong year as originally planned. Police reported that Johnson had watery red eyes, slurred speech, and smelled of booze. An initial reading of his blood alcohol level came in at .136, almost twice the legal level to drive. Johnson was arrested and taken to the Natrona County Detention Center “without issue.” (https://bit.ly/2Vih8So)

SCOOP OF THE DAY: Brought to you by BetterCreditCards.net
A study by the Max Planck Institute found that Baboon Mothers will set their sons up with sex partners. (https://bit.ly/2YHw2Um)

Police in Fayetteville, Arkansas arrested a woman who posed as a deputy so she could get her boyfriend out of prison. (https://bit.ly/2MeHo0P)

The National Beard and Mustache Championships are under way in Antwerp, Belgium. It looks like a German guy is gonna win best mustache.
(https://bit.ly/2WSy6Iu)

A French town is offering free Viagra to any couple who moves there in an effort to boost their birth rate. (https://dailym.ai/30BrSPl)

DNA tests revealed that 30% of the migrant families crossing the U.S. Border are not related, despite their claims for family asylum. (https://washex.am/2Wa6jGf)

A Fleet of Vintage World War II Planes departed the U.S. for Normandy Monday to prepare for D-Day celebrations. (https://bit.ly/2X0zx80)

A study by the Wall Street Journal found that Millennials are in worse financial shape than every previous generation before them.
(https://on.wsj.com/2HspHWY)

A new survey found that San Francisco has topped Zurich, Germany as the best place to make money. (https://bloom.bg/2w87kQv)

The NYPD has been rocked by a scandal in which a female officer hired a hitman to kill her husband and her new boyfriend’s daughter.
(https://nyp.st/2HqIwK2)

FUN FACT FOR YOU:
Share this with your friends... they'll think you're really smart!
Columbus Thought He Saw Mermaids. During his travels, in 1493, Christopher Columbus believed he saw mermaids in the ocean, which he described as “not half as beautiful as they are painted.” More than likely, he had simply spotted manatees in the water—not so beautiful indeed.

Wiccaphobia… Fear of witches and witchcraft.


WEIRD NEWS: Brought to you by WeirdGiftOfTheDay.com
An accused lemur schemer is coming clean. The fight for preserving endangered animals scored a major victory when a 19-year-old California man agreed to plead guilty to stealing a rare lemur from a zoo last year. According to the Department of Justice, Aquinas Kasbar admitted in a plea agreement to swiping Isaac — a 32-year-old ring-tailed lemur — from the Santa Ana Zoo last July. The night of the animal’s abduction, Kasbar snuck into the zoo after hours and used a bolt cutter to create an opening in the lemur’s enclosure. In the process, Capuchin monkeys escaped from the same cage and had to be recovered by zoo staffers. The kidnapped critter — the oldest of its species in North American captivity — was recovered after Kasbar dropped the animal off in a plastic drawer near a Newport Beach Hotel. Attached to the container was a note that read: “This belongs to the Santa Ana Zoo it was taken last night please bring it to police.” Kasbar has been charged with unlawfully taking an endangered species and may face a year in prison and a $100,000 fine.
(https://nyp.st/2K2dR7s)


Some people are really passionate about pepperoni. A Pizza Hut customer in Ohio was arrested after allegedly threatening the manager of his local shop over the lack of pepperoni on his pie. Late at night on May 9th, officers with the Cleveland Heights Police Department responded to a call of an angry customer who came to the restaurant after his pizza, which he ordered online, arrived without his requested topping. The man, a 31-year-old, then said he wanted to “come around the counter and kill” the manager, but added that he didn’t want to be charged “with a robbery.” The man later went outside and removed something from his Volkswagen before coming back to stand in the doorway of the Pizza Hut, holding the item in his pocket. After ten seconds, he departed, but flashed a "black handgun in the air" on the way back to his car. Police were able to track the suspect using the address he listed on his online order, as well as security footage taken at the scene. (https://fxn.ws/30A1YM3)

What do these 3 things have in common:
COBOL—FRENCH—SIGN
(They are all Languages)