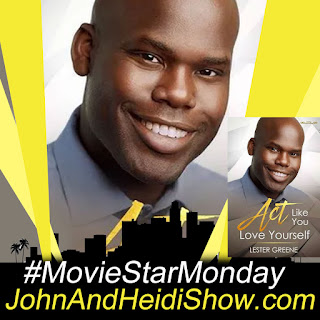 It's a #MovieStarMonday with Actor, Author, Producer & Rapper Lester Greene . Born in Germany and raised in Texas, Lester first became a rapper, producing four rap albums before calling it quits. Then he moved on to acting, which he is still working on, and he recently added author to his list with his new book "Act Like You Love Yourself” available now at - https://amzn.to/2XpaADJ
https://www.lestergreene.com
http://www.imdb.com/name/nm4098919/

A new study by the Associated Press found that cow gas is contributing to Global Warming, but aren’t as damaging as cow burps. (https://bit.ly/2IPcE3R)
BRAIN ON DRUGS:
Brought to you by TimeForRehab.com! Each day we talk about people doing dumb things under the influence, but addiction is no laughing matter… if you or someone you know needs help, we're here to help! You can learn more at TimeForRehab.com.

A Vermont man was arrested last Tuesday while wearing a shirt that read “Periodic Drinker” on a charge of driving while intoxicated, among other charges. At 4:00 p.m., New Hampshire State Police took several reports of a vehicle operating erratically on Interstate 93. It was reported that the vehicle, a 2015 Hyundai Sonata, was weaving from lane to lane, tailgating, and passing in the breakdown lane. A short time later, Trooper Lori Terhune spotted the Sonata traveling on I-93. As the vehicle passed, she saw that it was speeding and continuing to operate erratically. Terhurne caught up to the vehicle and eventually stopped it in Campton. Terhune had learned that the Sonata had struck two other vehicles between Concord and Plymouth, causing heavy damage to the vehicles and had been driven away from the scene of both collisions. The driver and lone occupant of the vehicle was identified as 26-year-old Robert Harris. Harris submitted to field sobriety tests, was arrested, and charged with DWI, conduct after an accident, reckless driving, and resisting arrest or detention for fighting with Terhune during the booking process.
(https://bit.ly/2vqn5SB)

Film Critics are accusing Daniel Craig of ruining the James Bond series by continuously whining about the role and coming off as unintelligent on screen.
Did you see that other story a few weeks back about how James Bond technically consumes an average of six drinks per film? (https://nyp.st/2GNj4Oy)

SCOOP OF THE DAY: Brought to you by BetterCreditCards.net
An Indian woman was rushed to the hospital after crying uncontrollably while she was watching “The Avengers.” (https://bit.ly/2GRuPnc)

Revised numbers show that the Avengers: Endgame brought in $1.2 billion dollars during its opening weekend. (https://bit.ly/2vshT0L)

Elvis Costello performed with the members of “Spinal Tap” during a special screening at the Tribeca Film Festival. (https://pge.sx/2J4vsvo)

Adele was spotted kissing a mystery man who looks like her ex-husband in New York City. (https://pge.sx/2ZKmWYc)

We all make mistakes! The average American worker makes 118 mistakes each year. On a recent episode of the BBC podcast More or Less: Behind the Statistics, the narrator begins by telling listeners that the episode was almost pulled because of an error. Instead, they decided to release the podcast episode as-is -- and invited listeners to spot the error. (Spoiler alert: When comparing the world's best golfers, the host compared Tiger Woods to Jack Nicholson.)

In New York City, a woman who scammed millionaires by pretending to be a German heiress has been found guilty and now faces prison time.

Transportation officials in California responded to a stretch of highway where a semi spilled about 30,000 pounds of frozen food.

FUN FACT FOR YOU:
Share this with your friends... they'll think you're really smart!
Easter Island Heads Have Torsos
You know the heads of the Easter Island figures, but often overlooked is the fact that they also have bodies. Archaeologists at UCLA have developed the Easter Island Statue Project to dig deeper into these Pacific Island icons and explore what’s below the surface—full-bodies statues measuring as much as 33 feet high.
NOW FEAR THIS.... FUN WITH PHOBIAS!

WEIRD NEWS: Brought to you by WeirdGiftOfTheDay.com
Police say an unruly customer at a restaurant in Ohio pulled an iguana from under his shirt, swung it around, and threw it at the manager. Painesville police were called to the Perkins restaurant around noon Tuesday. Police say they apprehended the suspect a few blocks away in the city roughly 30 miles northeast of Cleveland. Authorities did not say what provoked the attack. The 49-year-old was charged with disorderly conduct, resisting arrest, and animal cruelty. Police say the lizard, whom they named “Copper,” was taken to the Lake County Humane Society to be checked by a veterinarian. (https://bit.ly/2IDuBC7)

A Florida man didn’t want his wife to leave the house so he took matters into his own hands. According to the Walton County Sheriff’s Office, Danny Stewart was charged with aggravated assault after he plowed the forks of his tractor into the side of her truck outside their Defuniak Springs home. According to a police report, a deputy responded to a disturbance call on Friday. The wife, who had safely escaped to the Walton County Fire and Rescue station, told the deputy about the incident. She said that she’d arrived at the estranged couple’s residence to get some items and was confronted by Stewart, demanding that she stay. She then got into her truck to leave the premises. That’s when the husband hopped in his tractor, and drove through a fence to go after her. The victim then said that Stewart used the pallet forks on the front of the tractor to hit her driver side rear window and door. Damage to her vehicle could be clearly seen and matched with her statement. Stewart was charged with aggravated assault with a deadly weapon and taken to the Walton County Jail without incident. (https://hrld.us/2DndaSa)THESE THREE THINGS!