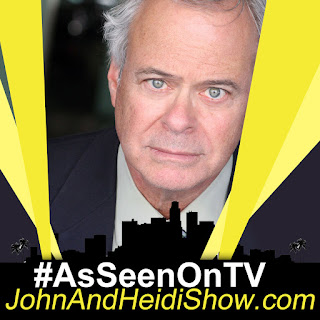 Today we visit with actor and former lawyer Samuel Whitehill. We will visit about his transition from law to working on movies an TV shows.
https://www.imdb.com/name/nm7719281/

A study by Texas A&M analyzed a cave man’s poop and determined that he once ate an entire rattle snake.(https://bit.ly/2vkXf2s)
BRAIN ON DRUGS:
Brought to you by TimeForRehab.com! Each day we talk about people doing dumb things under the influence, but addiction is no laughing matter… if you or someone you know needs help, we're here to help! You can learn more at TimeForRehab.com.

A Tulsa man was arrested on a burglary charge last Monday after firefighters pulled him out of a chimney at an east Tulsa business. Police arrested 23-year-old Keenan Holmes last Monday morning after he spent most of the night wedged in the chimney at Durango Auto Center. Between midnight and 1:00 a.m. last Monday, Holmes broke into Floyd & Son’s Body Shop west of Durango Auto Center. He used power tools to cut wiring at the business before moving down the street and climbing on top of the Durango business. Once on top of the building, Holmes reportedly dropped down the chimney, leaving a power saw on the roof. He then became stuck and stayed there until employees arrived later in the morning to hear him moaning. Firefighters used pulleys to lift him out of the chimney. He was taken to a hospital and then was booked into the Tulsa County jail. He was booked on complaints of second-degree burglary, malicious injury to property, possession of burglary tools, and possession of drug paraphernalia. (https://bit.ly/2PC02xE)
BIG SCREEN-LITTLE SCREEN: Brought to you by ChannelSurferTV.com

Last weekend was a record-breaking weekend for “Avengers: Endgame,” which took in $350 million at the domestic box office. “Captain Marvel” finished in a distant second place with $8 million. “The Curse of La Llorona” came in third place with $7.5 million. “Breakthrough” made $6.3 to finish fourth. “Shazam!” slipped into fifth place with $5.5 million. SCOOP OF THE DAY: Brought to you by BetterCreditCards.net
The U.S. is now facing its largest outbreak of the childhood disease measles in 25 years.
Americans are tired of celebrating birthdays, and it’s not because they live in a society obsessed with staying young. According to a survey the majority of Americans say their birthday feels no different from any other day of the year, and a third of those surveyed say their lack of enthusiasm stems from the hassle of planning a party.
Burger King announced that its vegan burger, the Impossible Whopper, has been such a big success in test markets that the company plans to make it available in all locations by the end of the year. People say the vegan Whopper is just as tasty as the original Whopper.
A 38-year-old Nashville man is in jail after police say he attacked a Mercedes with a motorized Scooter, telling police he struck it because “it’s a Nazi car” and people “should buy American.”
$500 to $1,000: Price of a high-end Kentucky Derby hat. 90 percent of female spectators wear hats. This Derby is this weekend.

FUN FACT FOR YOU:
Share this with your friends... they'll think you're really smart!
Ravens Can Learn to Speak Better Than Parrots
Parrots have the reputation as the most talkative birds in the animal kingdom, but ravens could hold their own in a debate any day. In captivity, the animals can be trained to mimic human speech, saying basic words like “hello” and “hi” and even coughing like a person. However, it’s not clear if they can be taught to say “nevermore.”
Poe Originally Wanted the Raven to Be a Parrot
In fact, Edgar Allan Poe had originally written his poem to feature a parrot, rather than the gloomy raven.

WEIRD NEWS: Brought to you by WeirdGiftOfTheDay.com
The Louisiana State Police on Monday revealed an extraordinary security breach at the governor’s mansion, saying they had arrested a man last week who trespassed into the building and damaged property before falling asleep on a couch. 34-year-old Reynard Green of Baton Rouge was booked Wednesday on counts including simple burglary, criminal trespass, and criminal damage to property. It was not immediately clear whether he had an attorney. East Baton Rouge Parish Sheriff Sid Gautreaux said booking records showed Green was found asleep on a couch and had broken an antique wooden table. Gautreaux said booking records referred to the location of the incident only as a “governmental building.” Booking records show Green was found asleep before 6:00 a.m.The records say he was placed in leg shackles as he was “becoming extremely violent.” State Police spokesman J.B. Slaton said Green also had assaulted two law enforcement officers after being taken to police headquarters.
(https://nyp.st/2GuS6dp)

One Florida man learned the hard way that just because you want to be a cop doesn't mean you are a cop. Matthew Joseph Erris of Dade City was arrested last Tuesday for impersonating a police officer. How he was caught is what makes this truly a “Florida Man” story. On Tuesday evening, Erris turned on red and blue flashing lights on his SUV and pulled over a car. The car was being driven by an undercover detective. Knowing the traffic stop was odd, the detective called 9-1-1 and actual deputies showed up to take Erris into custody. Police found a “realistic looking” airsoft pistol in Erris' SUV and had a law enforcement light bar installed in the vehicle. Erris was arrested and released on bond while officials attempt to determine if he had committed similar moves with non-cops before. (https://bit.ly/2KUbqpV)
THESE THREE THINGS!