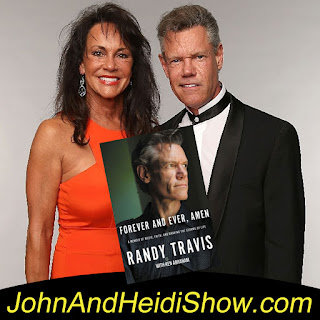 We visit with Grammy Award winner and Country Music Hall of Famer Randy Travis and his wife Mary about the new book “Forever and Ever, Amen: A Memoir of Music, Faith, and Braving the Storms of Life” written with Ken Abraham, a New York Times best-selling author known around the world for his collaborations with high-profile public figures.
The long-awaited, deeply personal story of one of American music's greatest icons, a remarkable tale of the utmost heights of fame and success, the deepest lows of life's sorrows, and a miraculous return from the brink of death—told as only Randy Travis can.

Beloved around the world, Randy Travis has sold more than 25 million albums in both country and gospel and is considered one of the finest performers of his generation, admired by superstars across the musical landscape, from Garth Brooks to Mick Jagger.

From a working-class background in North Carolina to a job as a cook and club singer in Nashville to his "overnight success" with his smash 1986 album Storms of Life--which launched the neotraditional movement in country music--Randy’s first three decades are a true rags-to-riches story.

A new survey revealed that 51% of Americans use a dip in the pool as an alternative to bathing after exercise or outdoor work. If you are guilty of this, just remember … 40% of adults surveyed admitted to peeing in a pool. (Buzz 60)
BRAIN ON DRUGS:
Brought to you by TimeForRehab.com! Each day we talk about people doing dumb things under the influence, but addiction is no laughing matter… if you or someone you know needs help, we're here to help! You can learn more at TimeForRehab.com.

A Colorado man who burglarized a polygamous compound in southwestern South Dakota has been sentenced to three years of probation. The Rapid City Journal reported that 29-year-old Wade Bird pleaded guilty to drug, burglary, and theft conspiracy charges. Authorities allege Bird and another man in January 2018 tried to steal trailers and other items from the compound in rural Custer County. The compound is run by members of a Mormon splinter group known as the Fundamentalist Church of Jesus Christ of Latter-Day Saints, or FLDS. The second suspect is in Colorado facing prosecution for allegedly violating a protection order and being a fugitive from justice. (https://dpo.st/2VRRrw5)
BIG SCREEN-LITTLE SCREEN: Brought to you by ChannelSurferTV.com

Kylie Jenner received a $72,000 purse from baby daddy and boyfriend Travis Scott for Mother’s Day. The purse is a Hermès bag with pink crocodile gold hardware. (https://pge.sx/30c2T54)
Olivia Jade Giannulli has been partying all week in Los Angeles despite the fact that her mom, Lori Loughlin, is facing serious jail time. (https://pge.sx/2WHCn1n)

SCOOP OF THE DAY: Brought to you by BetterCreditCards.net
An electronic billboard burst into flames in Times Square on Saturday but luckily no one was injured. (https://yhoo.it/2VOkdyp)

The people of Iceland are upset with Justin Bieber because he filmed a video in a protected canyon (Fjadrargljufur) that’s now become a massive tourist attraction. They’re saying 10,000 people a month visit this thing.
(https://nbcnews.to/2w99K1s)

Two of Madonna’s dancers hugged onstage while wearing Israeli and Palestinian flags during her concert in Tel Aviv. (https://bit.ly/2HAnYOi)

Madonna was banned entry in an Israeli venue over an unsigned contract.
(https://pge.sx/2w20gF7)
Burger King is going to deliver Whoppers to drivers stuck in traffic in Los Angeles. (https://cbsloc.al/30omoYa)

A Rabbit Sculpture by Artist Jeffrey Koons sold for $91 million dollars at an auction in New York City. (https://yhoo.it/30qxdZJ)

A Claude Monet painting from his famous “Haystacks” series sold for $110.7 million at a New York Auction on Tuesday. (https://yhoo.it/2Vr4joN)


FUN FACT FOR YOU:
Share this with your friends... they'll think you're really smart!
Ulysses Was Once Banned in Four Countries. Though now considered one of the greatest books of English literature ever written, James Joyce‘s Ulysses was once banned in the United States, Canada, Ireland, and England, due to its sexually explicit content, leading to the British Director of Public Prosecutions to call it a “filthy book.”

WEIRD NEWS: Brought to you by WeirdGiftOfTheDay.com
After allegedly yelling at a group of school children and fighting a tree, a shirtless Florida man was arrested in Milton on May 5th. 32-year-old George Ammons was charged with disturbing the peace and booked into the Santa Rosa County Jail with a $100 bond. As of Tuesday, he remained in custody. According to an arrest report, a police officer was dispatched to Russell Harber Landing Park about a suspicious person who was upsetting a field trip of over 300 students on May 5th. A teacher advised law enforcement that a white, shirtless man wearing blue jeans and a pair of glasses was “hanging around” the children. Ammons told the police that he’d walked from “East Milton to Burger King” to see his children and believed that they might be in the park. The officer told Ammons to leave the park until the field trip had left. Upon hearing this, the report stated, Ammons “walked a few feet and refused to leave and began fighting a tree.” (https://bit.ly/2EcYANo)

A man in Marlow, England, has been fined and had his license suspended by the police for driving with a “dangerous” amount of fast-food wrappers and sundry trash in his car. Police said he was so inundated that there was even “rubbish under the floor pedals,” potentially obstructing the car’s braking function. The man was pulled over — and eventually arrested — by the Thames Valley Roads Policing Unit for reasons that were not shared by authorities, but quickly learned there was a much more alarming issue at hand. In an image obtained by cops, McDonald’s wrappers and cups, Styrofoam containers, receipts, documents, and various other indiscernible pieces of garbage can be seen spilling out of the driver’s side door, on the dash, and behind the driver pedals. (https://nyp.st/2Yybc9S)THESE THREE THINGS!

What do these 3 things have in common:
GOLF BALL—CABBAGE PATCH DOLL—SHIRLEY TEMPLE
(They have DIMPLES)

Commencement Speaker Announces He Will Pay Off Class Of 2019's Student Debt. https://www.sunnyskyz.com/good-news/3322/Commencement-Speaker-Announces-He-Will-Pay-Off-Class-Of-2019-039-s-Student-Debt