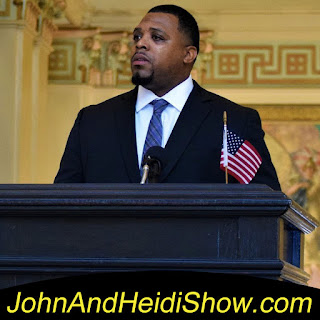 Today we visit with Cornelius J. Maxwell, a US Army veteran who served 3 combat tours during Operation Iraqi Freedom. He is the creator of the Transition Units Theory. He is trying to gain support for this through an online campaign - https://www.change.org/p/we-can-save-nearly-2-million-veterans-with-transition-units

He is lso on the board for Wings For Warriors https://wingsforwarriors.org/board/cornelius-maxwell/

An NBC News survey found that IQ rates are dropping in developed countries and humanity could soon be undermined by an intelligence crisis.
(https://nbcnews.to/2VSDwa1)

According to court papers, a Pennsylvania woman who turned 55-years-old on Wednesday assaulted a male acquaintance with a box cutter because she had not received a present, card, or cake to mark the occasion. Cops say that Georgia Zowacki was celebrating her May 15th birthday when matters turned stabby at her Pittsburgh-area residence. David Rae, who has lived with Zowacki for four months, told police that Zowacki “consumed a large amount of vodka throughout the day.” Rae added that Zowacki eventually “became extremely upset and violent because nobody bought her a birthday present, birthday card, or birthday cake.” Incensed, Zowacki allegedly “grabbed a box cutter knife” and held it near Rae’s throat “threatening to kill him.” Rae told police that Zowacki then trashed his room, throwing his TV on the floor, tipping over a nightstand, and breaking his bed. A patrolman responding to a call about a physical domestic dispute located Zowacki sitting on a neighbor’s porch. She was arrested for aggravated assault, reckless endangerment, and simple assault.
(https://bit.ly/30sY3k8)

Quentin Tarantino’s new film, “Once Upon A Time In Hollywood,” ran two hours and forty one minutes long at the Cannes Film Festival. The film is said to be “an ode to a bygone era” in Hollywood. (https://bit.ly/2LXGXrm)

“The Bachelorette” is having a dramatic season with one contestant already telling Hannah that he is falling in love with her. (https://bit.ly/2VH3FDE)

SCOOP OF THE DAY: Brought to you by BetterCreditCards.net
A Retired Judge is calling for a Special Prosecutor to investigate the Jussie Smollett case and has filed a motion against former prosecutor Kim Foxx.
(https://pge.sx/2wfEgqu)

Howard Stern says in his new book that QUOTE, “Wild Donald Trump was one of his best guests.” (https://pge.sx/2M4khG6)

Justin Bieber announced that he’s releasing his own deodorant this fall. It comes out in September. (https://pge.sx/2M4khG6)

A group of Stanford University has developed a “build your own dog” kit that allows people to create a robotic dog for $3,000. (https://dailym.ai/2HOq1OU)

Over one hundred people were arrested after a brawl broke out at the annual “GO TOPLESS” event in Galveston, Texas. Two dozen topless women were arrested for fighting. (https://dailym.ai/2HNZRvE)


A movie theater in Plano, Texas is allowing dogs along with bottomless wine for its customers. (https://bit.ly/2WlCqD8)

FUN FACT FOR YOU:
Share this with your friends... they'll think you're really smart!
Male Platypuses Are Venemous. They may look silly and harmless, but platypuses can be dangerous—at least certain ones. The males come equipped with sharp stingers on the heels of their rear feet that can add some extra pain to a kick. The venom has been found to resemble that in animals such as snakes, starfish, and spiders—though it’s an odd thing to find in mammals.

Dishabiliophobia: Fear of undressing in front of someone.


WEIRD NEWS: Brought to you by WeirdGiftOfTheDay.com
According to authorities, a former Disney World employee accused of stealing $7,000 in memorabilia was arrested after posting photos of the missing items online. 24-year-old Patrick Allen Spikes became a suspect when his Twitter profile included pictures of valuable items two months after they were swiped from the theme park in Orlando, Florida. He became combative when questioned about the photos of “Buzzy,” a character missing from the “Cranium Command” attraction at Epcot, leading to an initial charge of resisting arrest. A search warrant of his home and phone then turned up photos of stolen Disney wigs, skirts, and jackets. He is accused of also using his Disney employee ID to access underground tunnels to get to Magic Kingdom’s Haunted Mansion, where some of the costumes were stolen. Financial records showed that Spikes received about $30,000 via PayPal from two buyers with police saying the missing items were far more valuable on the black market. One of the buyers returned eighteen items that Disney World said had all been stolen. Detectives say they are still investigating and trying to track down the rest of the items that have been documented as stolen. Spikes was charged with burglary, grand theft, and dealing in stolen property. (https://nyp.st/2VBqXe8)

A woman in California was kicked out of a youth basketball game after cell phone video caught her sticking her legs out in an attempt to trip a player from the competing team. The team from the Cornerstone Basketball Academy based in Vallejo, California traveled to the Hardwood Palace Tournament to take on the players from the Folsom Elite Basketball Academy on Mother's Day weekend. Eugene Solano, the director of the Vallejo team told Fox 40 “This specific team is our 10-year-old and under team.” At one point in the game, a woman in a pink hat sitting in the front row was caught on camera extending her legs out, trying to intentionally trip a 9-year-old Cornerstone Basketball Academy player. Despite the attempted “foul” by the parent on the sidelines, the 9-year-old player who got tripped went on to score 11 points in the game. The woman has been banned from attending any future basketball games at the Hardwood Palace.
(https://ihr.fm/2WUhyQt)
THESE THREE THINGS!
What do these 3 things have in common:
A Martial Artist—A Butcher—A Bulldog
(They all have chops)