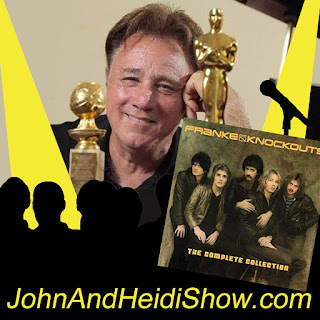 Franke Previte, the award winning composer ofv "(I've Had) The Time of My Life," the Academy Award and Grammy Award winning song from Dirty Dancing, along with the other Dirty Dancing chart-topper "Hungry Eyes" has recently released The Complete Collection on the FRIDAY MUSIC imprint..includes all the studio recordings from the pre Oscar winning journey with his band Franke & the Knockouts + Much More.
AVAILABLE NOW - https://fridaymusic.com/dept/franke-the-knockouts?cp=80419_81669_80744

TODAY IS A SPECIAL DAY! (A special thank you to NationalDayCalendar.com)
Frankie Previte (Frankie & The Knockouts)

A study finds rocking chairs are good for your health. The study (University of Rochester) found daily rocking among Alzheimer’s patients reduced their anxiety, lifted depression, improved balance, and lessened the need for pain killers.
BRAIN ON DRUGS:
Brought to you by TimeForRehab.com! Each day we talk about people doing dumb things under the influence, but addiction is no laughing matter… if you or someone you know needs help, we're here to help! You can learn more at TimeForRehab.com.

After allegedly leading police on a high-speed motorcycle chase, an Alabama man reportedly gave cops quite a shock when he grabbed a bag of meth and started trying to eat it -- then the cops gave him a shock.  Marshall County Sheriff’s deputies spotted 48-year-old Toney Ray Johnson standing in the middle of the road next to his motorcycle. Authorities said he appeared to be struggling to start his vehicle. When the deputy approached, Johnson allegedly hopped on his motorcycle and sped off. The deputy followed him and, after a short chase, Johnson pulled over. The deputy said he saw Johnson attempt to eat something from a plastic bag, which was later determined to be meth. After a brief struggle, the deputy used his stun gun on Johnson before the man could consume the drugs. Johnson was charged with drug possession, resisting arrest, and attempting to flee from a law enforcement officer. (https://fxn.ws/2WeNOxc)

The first trailer has come out for the “Sonic The Hedgehog” movie starring Jim Carrey and the internet has not been kind. (https://bit.ly/2IV9jQO)

The director of “Sonic The Hedgehog” is vowing to redesign the film because of the fan backlash over the trailer. (https://nyp.st/2vFgVOA)

Over 100 Celebrities attended the MET GALA in New York Monday night. The event actually has strict rules including no selfies and no smoking.
(https://nyp.st/2J1livY)SCOOP OF THE DAY: Brought to you by BetterCreditCards.net
The U.S. Army has chosen a new uniform that’s based on the green dress coat and khakis that soldiers wore during World War II. (https://bit.ly/2VmbweL)

A growing number of people are getting married to themselves in a new ritual called “sologamy.” (https://bit.ly/2JlDgZN)

Pennsylvania Police arrested two suspects who stole $21,000 worth of lingerie from a Victoria’s Secret in Harrisburg. (https://nyp.st/2PUHNUg)

A shocking new report claims the United States has been infecting monkeys with chemical weapons at a lab in order to test the effects on humans.
(https://bit.ly/2LsKkGF)

NASA is preparing for a huge asteroid called “God of Chaos” that will zoom past the earth in 2029.(https://ind.pn/2VExI32)

A video has gone viral of a golfer getting hit in the privates with a shot that ricocheted off a tree. (https://bit.ly/2Jh4LDG)

Three employees were arrested at an Atlanta Denny’s after they beat up a reporter who asked about the restaurant’s failing health score.
(https://on-ajc.com/2H4W8un)

The U.S. Navy is compiling a catalogue of UFO sightings reported by its pilots, but the report is not expected to be released to the public.
(https://bit.ly/2Ve3KUb)

Octophobia... Fear of the figure 8

Police in Lincoln, Nebraska, said a man suffered non-life-threatening injuries after he dropped his gun, it went off, and shot him in the genitals. According to LPD, police were called around 9:00 p.m. on Wednesday to Bryan West hospital on a report of a gunshot wound. Police said they contacted a man who suffered a non-life-threatening injury, and determined he was walking in the 3300 Block of Portia Street when he accidentally dropped his .22 caliber handgun. According to LPD, the gun fired and the bullet struck the man in the genitals. The man, Peter Jacobsson, was cited for discharging a weapon in the city and possession of a firearm by a prohibited person. (https://bit.ly/2JieQ33)

Three Okeechobee, Florida high school teenagers are under arrest after they were caught on video contaminating multiple deputies’ dinners. An anonymous person notified the restaurant owners about the incident. The owner of the restaurant viewed the video footage of the incident, fired the three workers, and contacted the Okeechobee City Police Department. Surveillance footage captured them spitting into food they were preparing for uniformed deputies who stopped for dinner at the Highway 55 Restaurant on April 27th. As a result of their investigation, 16-year-old Molly Spearow and 17-year-olds Alex Armstrong and Logan Pope were arrested and charged with the Florida Anti-Tampering Act – Food, a first-degree felony, and battery on a law enforcement officer, a third-degree felony. (https://bit.ly/2Jh6cSx)
THESE THREE THINGS!

What do these 3 things have in common:
ANDROPHOBIA—GYNOPHOBIA—DEMOPHOBIA
(They are all Fears of People: Men, Women and Crowds)
Newer Post Older Post Home