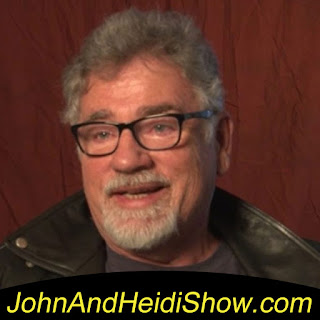 Today we visit with music LEGEND... Jocko Marcellino from Sha Na Na. They opened for Jimi Hendrix at Woodstock. Jocko has been with the group all these 50 years, we'll ask him about some of his great Woodstock stories. Sha Na Na, the band born at Woodstock, celebrate their 50th Anniversary.
They have a new album out called “Sha Na Na 50th Anniversary Commemorative Edition” available now - https://amzn.to/2XEgGTq

SURVEYS, STUDIES & SUCH: Brought to you by BetterCreditCards.net
A new study found that taking Vitamin D supplements has no effect on your heart health and will NOT lower your risk of heart disease.
(https://bit.ly/2KExfsy)
BRAIN ON DRUGS:
Brought to you by TimeForRehab.com! Each day we talk about people doing dumb things under the influence, but addiction is no laughing matter… if you or someone you know needs help, we're here to help! You can learn more at TimeForRehab.com.

A California man has admitted to having thirty pounds of marijuana in a suitcase aboard a plane heading to West Virginia. Twenty-two-year-old Gerardo Delgadillo Jr. entered a guilty plea Monday in federal court in Huntington to possession with the intent to distribute marijuana. Prosecutors say Delgadillo flew in October to Tri-State Airport in Kenova, and he admitted in court that he intended to sell the marijuana in his suitcase. Delgadillo faces up to five years in prison. Sentencing was set for Aug. 5th. Court documents didn’t list Delgadillo’s hometown. (https://nyp.st/31JmKtp)
BIG SCREEN-LITTLE SCREEN: Brought to you by ChannelSurferTV.com

A hidden camera was found in the bathroom on the set of the new James Bond film. (https://cnn.it/31VQ0gD)

Cuba Gooding’s Lawyers say the woman accusing him of groping her has a history of mental problems. (https://pge.sx/31RxGFf)

SCOOP OF THE DAY: Brought to you by BetterCreditCards.net
A rival to British politician Boris Johnson says his torrid love life makes him a security risk as the next Prime Minister. (https://dailym.ai/2ZJYyoL)

More than 2,000 people hit the Pick 4 Lottery in North Carolina after they chose the winning numbers: 0-0-0-0. According to the North Carolina Lottery Board, each winner will receive $5,000. (https://nyp.st/2X3SScq)

Queen Elizabeth is said to be horrified by the plague of rats at Buckingham Palace. (https://bit.ly/2xdhJLA)

WEIRD NEWS: Brought to you by WeirdGiftOfTheDay.com
An onlooker's video really fleshed out details of a Florida man’s arrest. Village police swarmed a gas station recently and used a taser to stop a naked 36-year-old man who danced in the parking lot before he tried to drive away as onlookers captured video of the strange scene. The incident took place in Mamaroneck, New York, where cops say the man from Hobe Sound, Florida appeared to be on drugs. As depicted in a video posted on Facebook by an onlooker, police are in the parking lot as the man prances out of the gas station's food mart and into a car next to a gas pump. The man then tried to drive away, but two police cars boxed his car in at the parking lot's Mamaroneck Avenue exit, where several officers surrounded the man's car. An officer opened the driver's side door and the man got out. Officers used a taser on the man after he refused to comply with officers’ verbal command. The man, whose name was not released by police, was charged with operating a motor vehicle while under the influence of drugs and public lewdness, both misdemeanors, and unlawful possession of marijuana, a violation. (https://bit.ly/2XAFzPS)

A driver in Lutz, Florida got a little wet last week after driving their Dodge Nitro into a backyard swimming pool. According to the Hillsborough County Sheriff's Office, the driver tried to avoid another car and mixed up the gas and brake pedals, knocking down a street sign, smashing through a fence, and ultimately plunging into somebody's pool. Somewhat ironically, this happened at the corner of Blind Pond Avenue and Blessed Place. Luckily, nobody was in the pool at the time of the incident. And for those of you unfamiliar with the Dodge Nitro, it was a funkily styled SUV first introduced in 2007. (https://bit.ly/2XuAbxJ)THESE THREE THINGS!
What do these 3 things have in common:
football teams—computers—porch doors
(They have SCREENS)